Alaska is a place of remote wilderness and rugged scenery. The energy of this part of the world is perhaps best encapsulated in the local wildlife. Katmai National Park, in southern Alaska, is world-famous for its population of grizzly bears. Over 2,000 brown bears reside within the park’s boundaries.

Weighing up to 1000 pounds (454kg), these impressive creatures emerge from their dens in late spring to capitalize on the bountiful food supplies that appear after the harsh winter months.  The bears congregate around areas such as Brooks Falls during this time to hunt for salmon. 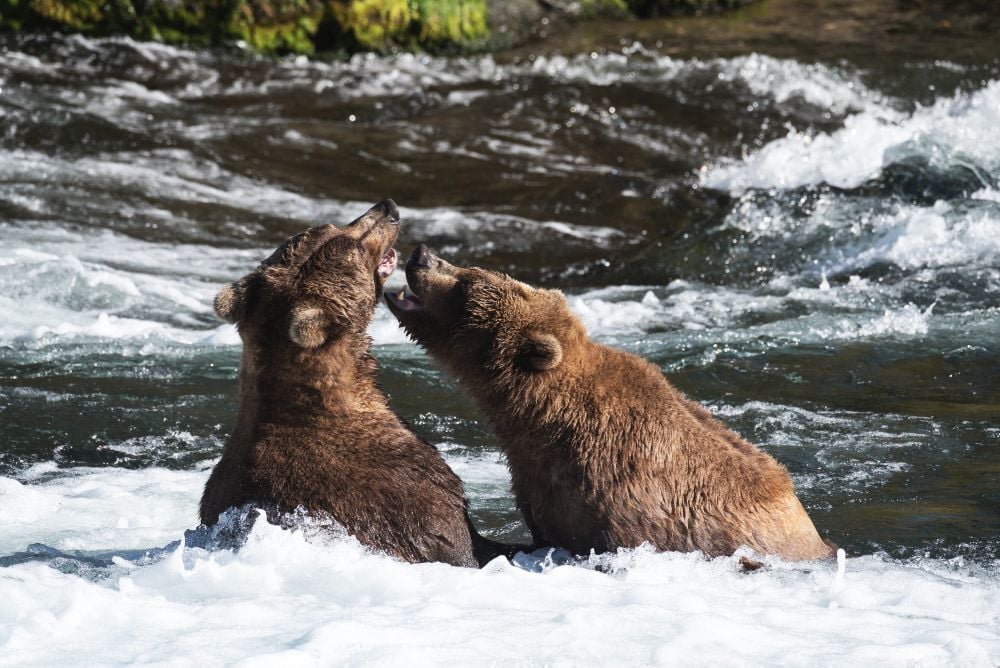 The best time to visit Katmai National Park for bear viewing is from late June until September. The bear viewing opportunities are excellent during this period.

The salmon run dates in Brooks Falls are in late June, throughout July, and in September. Bears congregate around Brooks Falls during this time to hunt for salmon. In August, only a few bears are visible as the fishing conditions are more complicated than before. 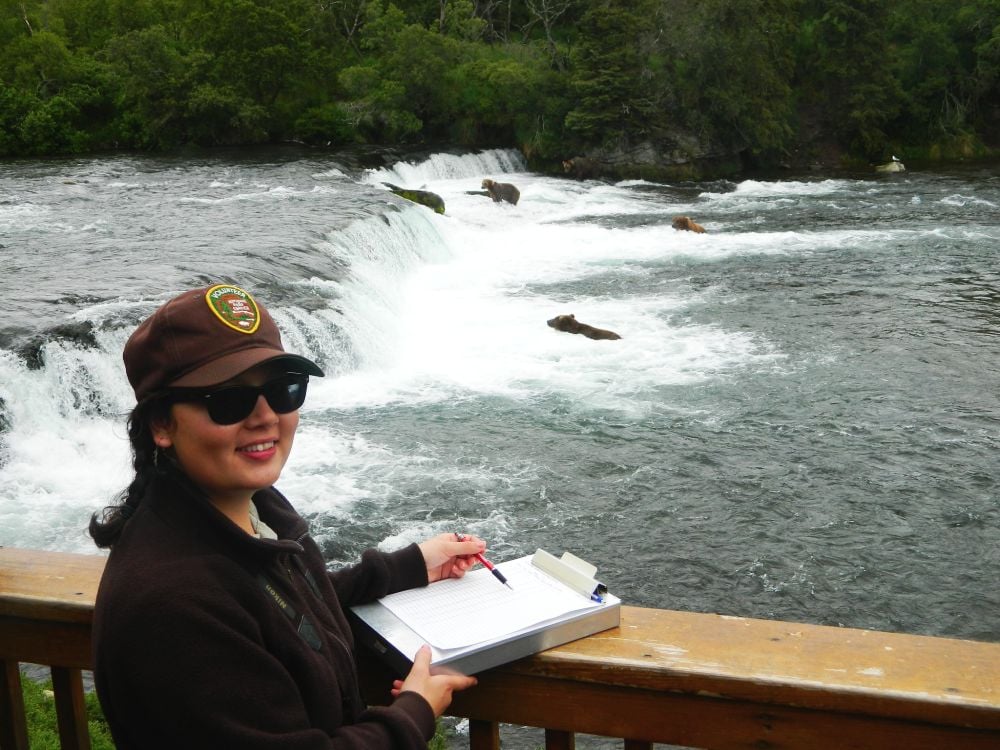 As the end of June and the whole month of July is the peak salmon catching period for brown bears, expect crowded viewing platforms during this time. A maximum of 40 visitors can watch the bears for one hour. The park rangers always check this limit. September is another peak viewing month, but with fewer visitors.  Livecam: Brooks Falls Bears Livecam 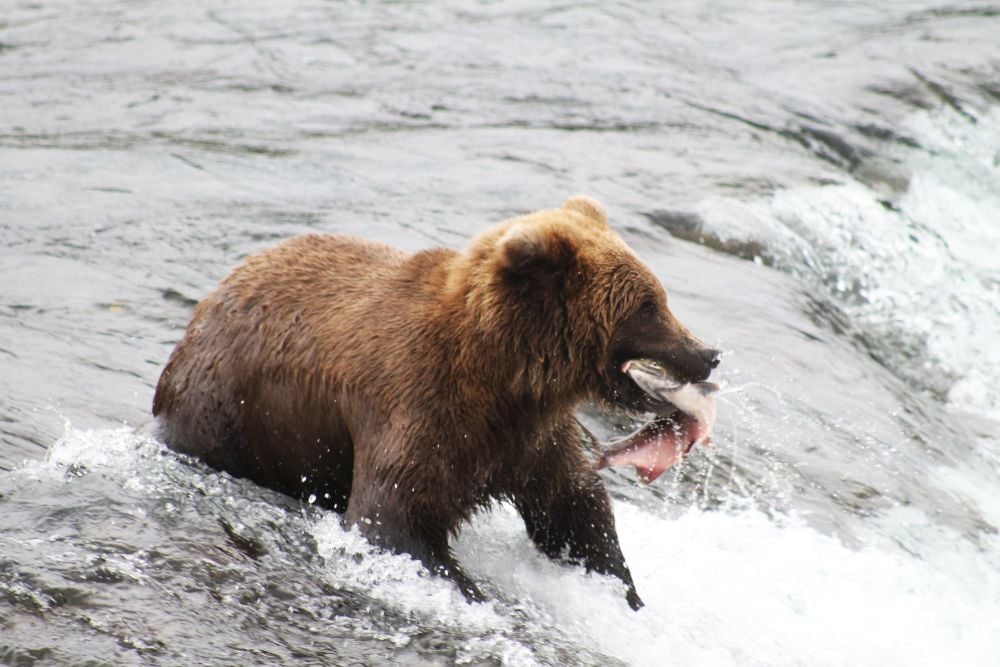 Brooks River is where the salmon leave the oceans in large numbers and return to breed in the rivers where they were born. It’s a spectacular wildlife event, and Brooks Falls in Katmai National Park is one of the best places to experience it. The bears cannot be seen every month. Please check our seasonal bear viewing guide below before booking your stay. 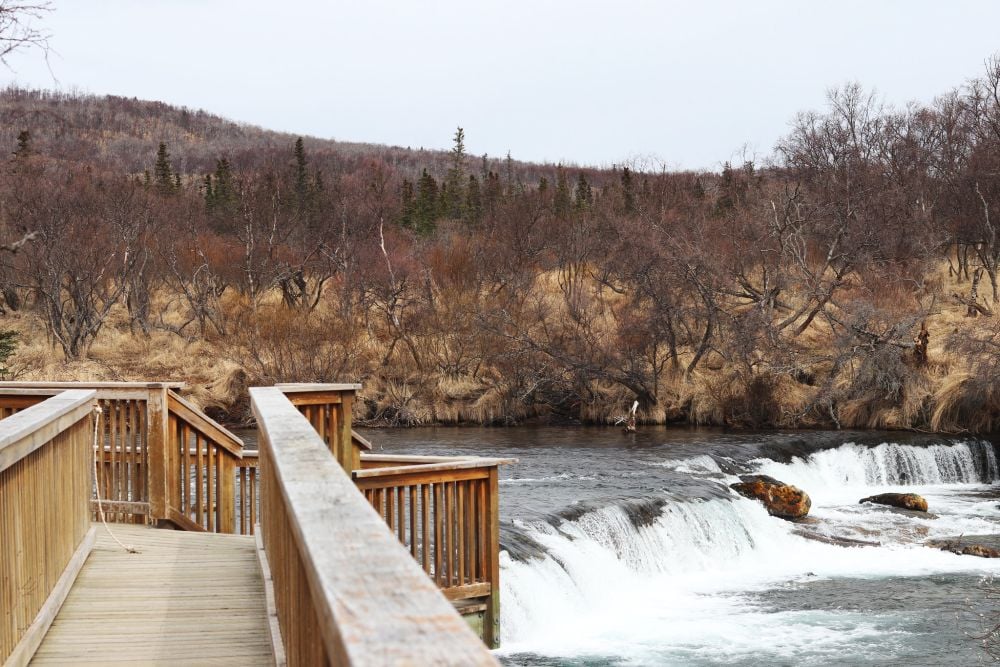 April is the first month in Katmai National Park when the grizzly bears begin to emerge from their winter hibernation. They tend not to be common around Brooks Falls during this time, instead of foraging for food elsewhere.

In May, the bears of Katmai National Park tend to move closer to the park’s rivers in preparation for the approaching salmon run. Despite this, they will not yet be present around Brooks Falls in large numbers. 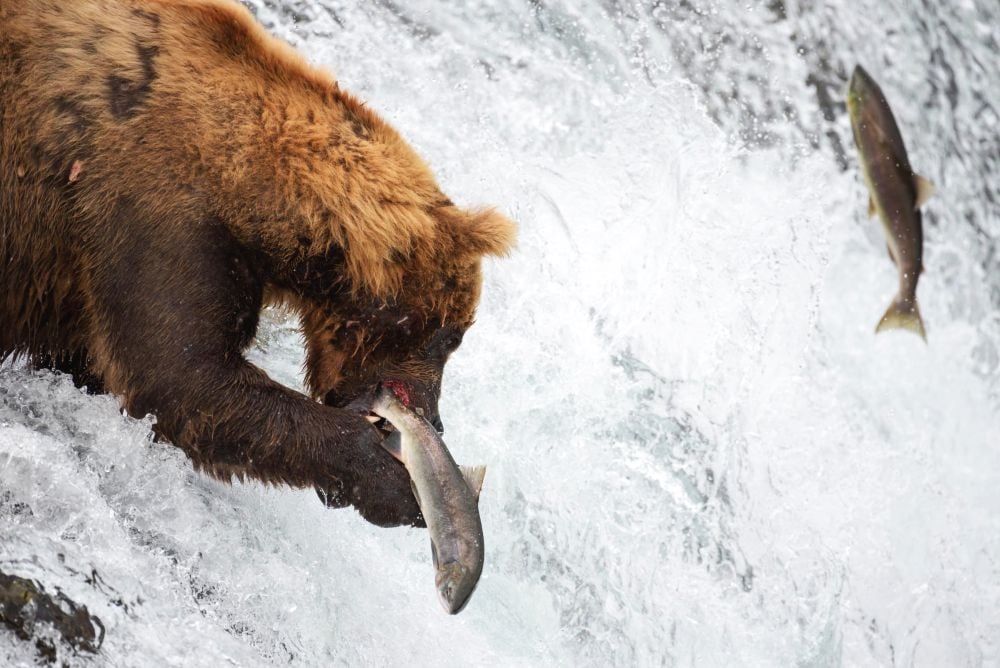 June marks the beginning of the salmon run, although it usually doesn’t get going until later in the month. At this time, a few early bears start to congregate around Brooks Falls, and small numbers can be seen fishing.

Tip: Read our Alaska in June article with visiting tips from a local.

During July, the salmon run in Katmai National Park peaks, with thousands of fish passing through Brooks Falls. This is also peak time for bear viewing, as the animals gather around Brooks Falls to make the most of the abundant food.

August in Katmai National Park is generally the last month of the salmon run, with the majority of fish have already completed their journeys. As a result, hunting opportunities for bears around Brooks Falls are slim, with many leaving to find food elsewhere.

However, August is a great month to visit Alaska for many other activities.

In September, bear numbers around Brooks Falls increase once again, with this being another great month for viewing them. This is because the salmon start to die after breeding, meaning they float downstream and provide easy meals for the bears. 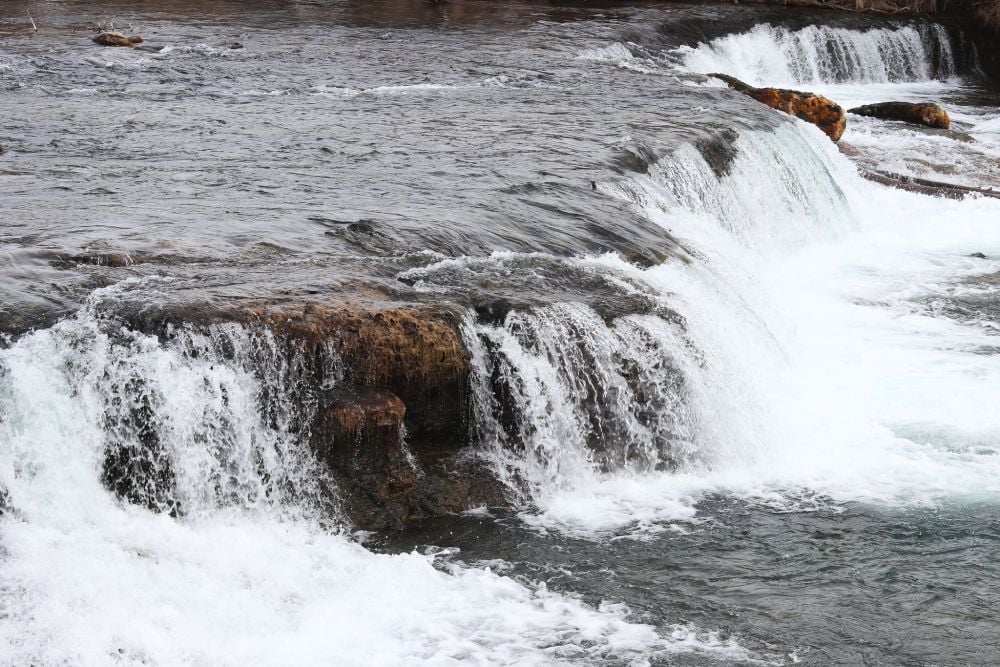 During October, most bears in Katmai National Park move away from Brooks Falls to find other places to forage. A few late individuals might still be seen, but not in any large numbers.

From November until March, the grizzly bears of Katmai National Park will be hibernating, and there will generally not be chances to see them.

Where to Stay (Lodging) 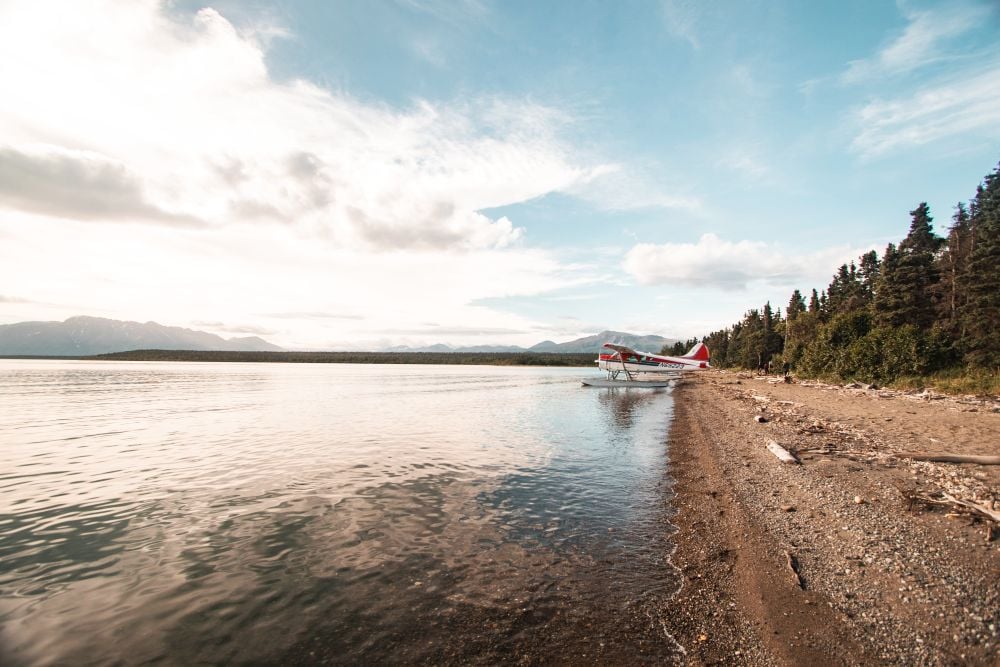 The easiest and most comfortable place to stay at is Alaska’s Gold Creek Lodge (Google Maps Location). The closest airport, King Salmon, is located only a few miles from the lodge. A free airport shuttle service is available.

It gets even better: Day trips are being fully organized to Brooks Falls by Gold Creek Lodge.  Tip: Making a reservation via booking.com provides the best service and a price match guarantee: Alaska’s Gold Creek Lodge – Near Brooks Falls >> Bookmark the link to save time and money later. 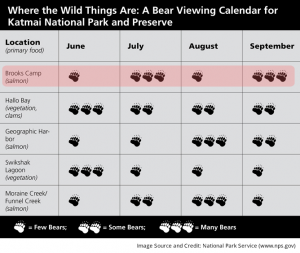 How To Get To Brooks Falls 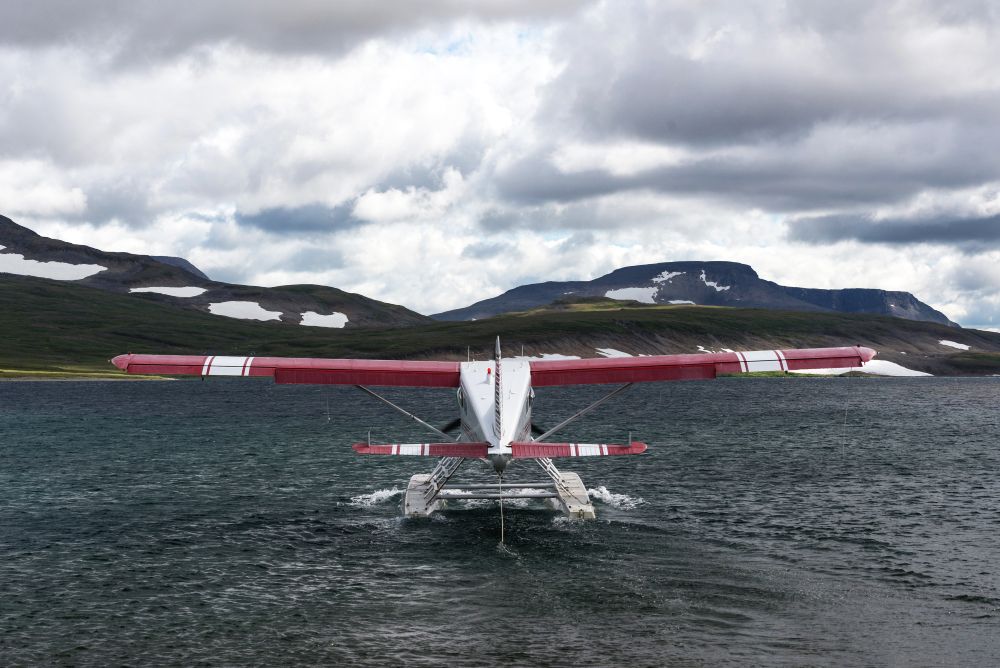 With Brooks Falls being over 30 miles from the nearest town, it can be tricky to get to.

This is the only way to get there, as no roads lead to Brooks Falls. The floatplane takes around 20 minutes.

Another option is to travel on a water taxi service which operates between King Salmon and Brooks Falls during the summer months. While this is a cheaper method of transport, the journey usually takes longer, with a 45-minute trip each way.

Tip: For hassle-free transport, book the Gold Creek Lodge (see above). Free shuttle service is included. They take care of everything!

What Brings The Salmon? 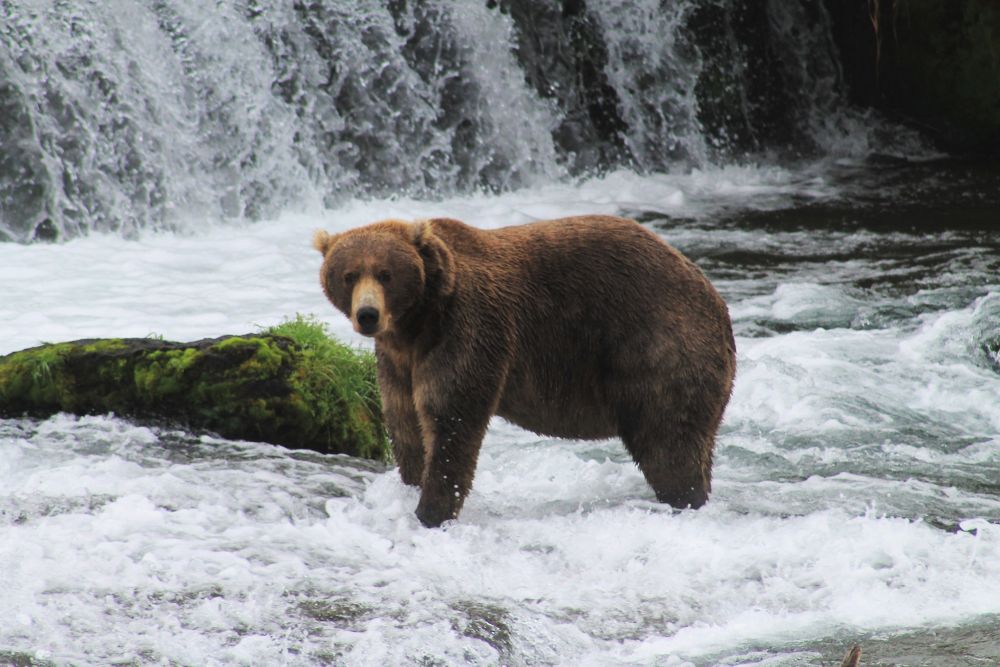 Salmon are born in the upper regions of rivers and streams, migrating to the oceans once they have matured. They often spend several years in these marine habitats before the urge to breed triggers their return to freshwater. 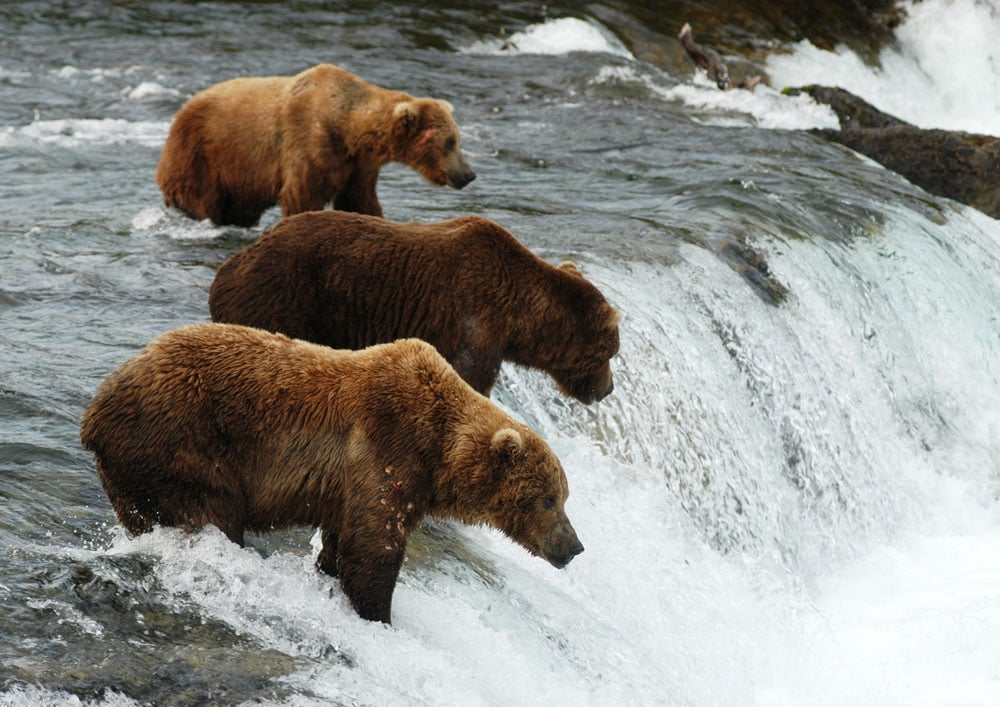 Salmon gravitate to the very rivers in which they were born, often having to travel hundreds of miles upstream to do so. It can be an incredible sight to see the salmon as they make huge vertical leaps over waterfalls, and this rich feeding opportunity does not go unnoticed by the bears.

Where to See the Bears 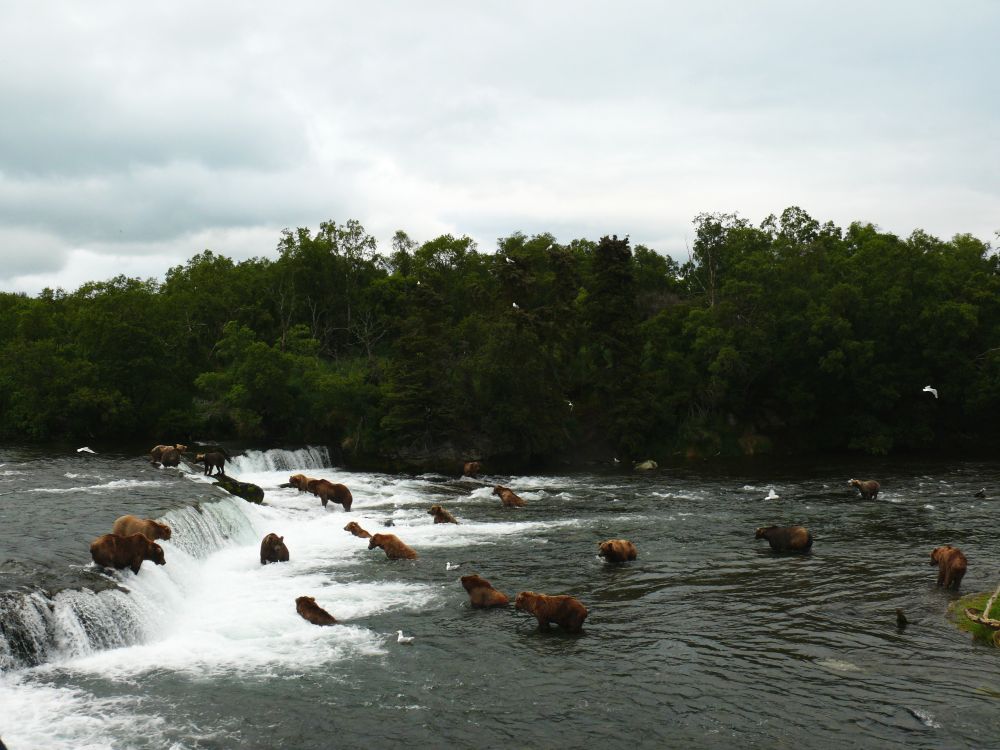 With several thousand grizzly bears packed into Katmai National Park, the animals have to spread out to ensure there is enough fishing space to go around. As a result, the bears can be seen anywhere on the Brooks River. However, Brooks Falls, in particular, is a perfect fishing spot, and the largest concentrations of bears gather here.

The facilities around Brooks Falls are fully geared-up for bear watching so that visitors can enjoy the bears here in a safe, comfortable environment. Two other wildlife platforms are present on the Brooks River – one just downstream from the falls and the other at the Brooks River’s mouth. Both can provide great chances to see bears and are often less crowded than the area around Brooks Falls. 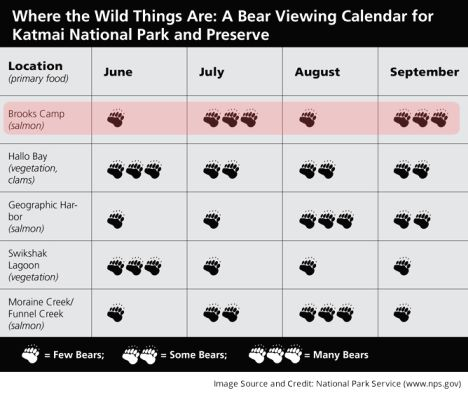 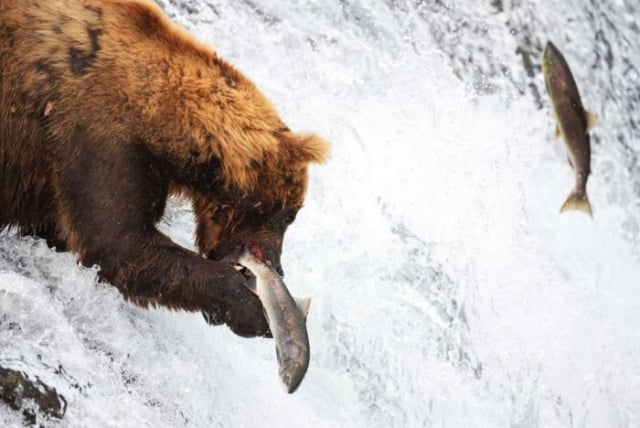 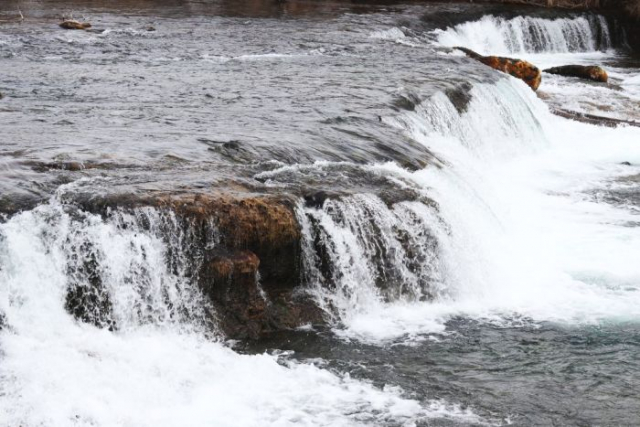 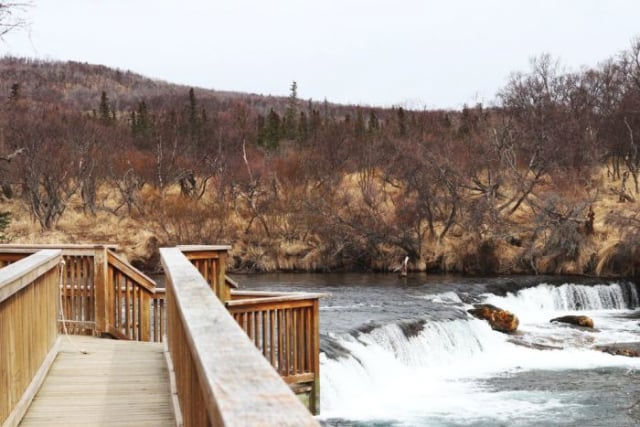 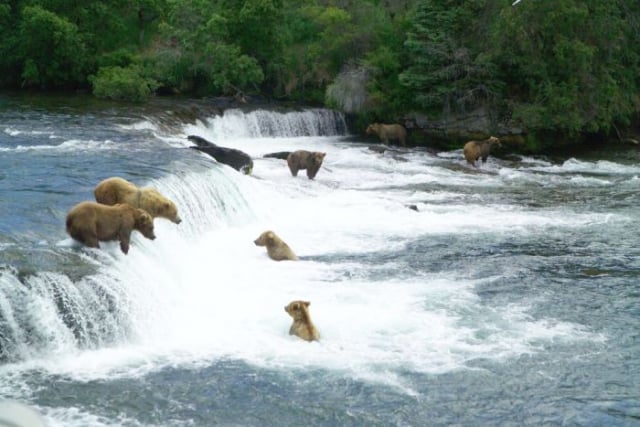 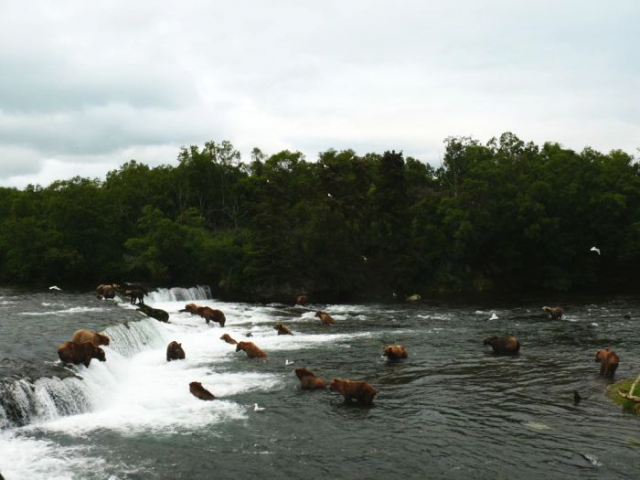 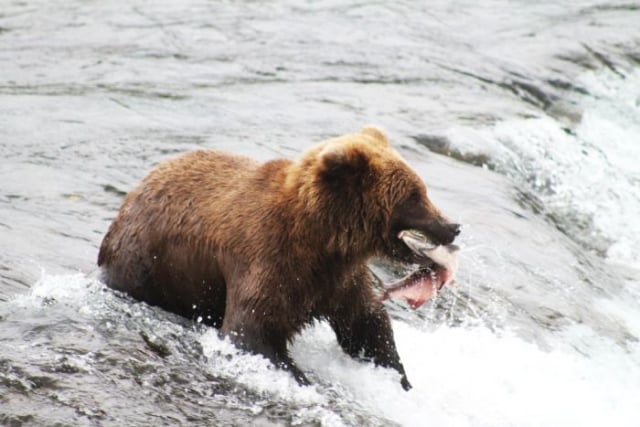 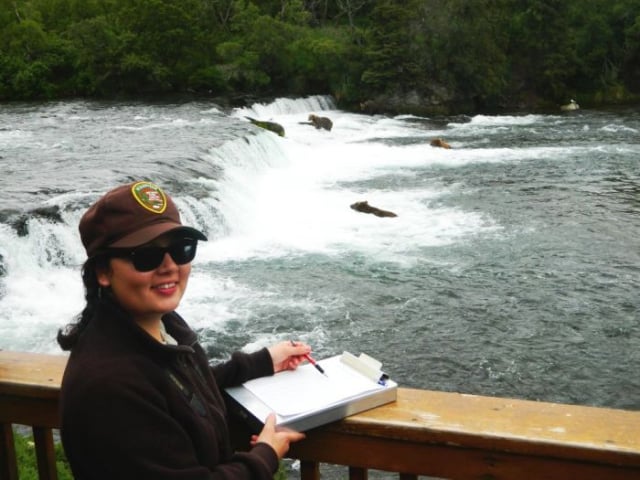 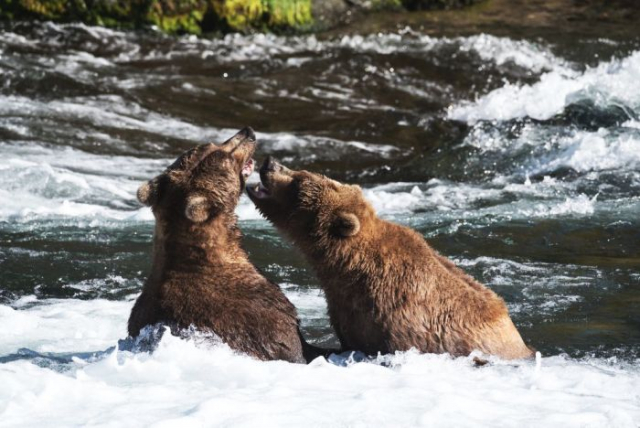 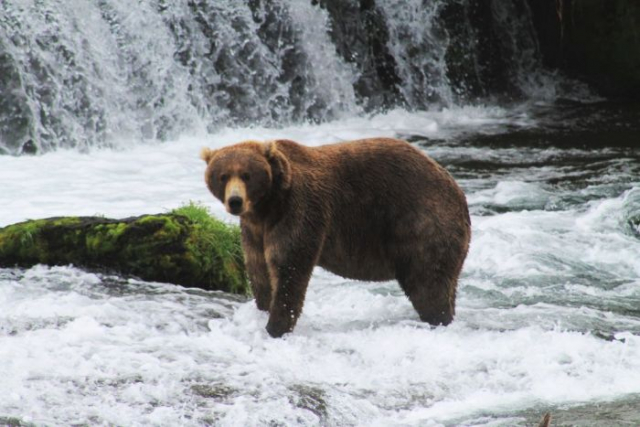