There are 6 great months in which to view bears at Katmai National Park in Hallo Bay. So let the activity you want to see determine your trip dates. Hallo Bay does not just depend on an intensive two week period of a salmon run like other areas. This fertile region provides abundant food for the bears.

The best time to see the bears in Katmai National Park (Hallo Bay) is from May to October. During that period it’s possible to see all kinds of bear behavior. 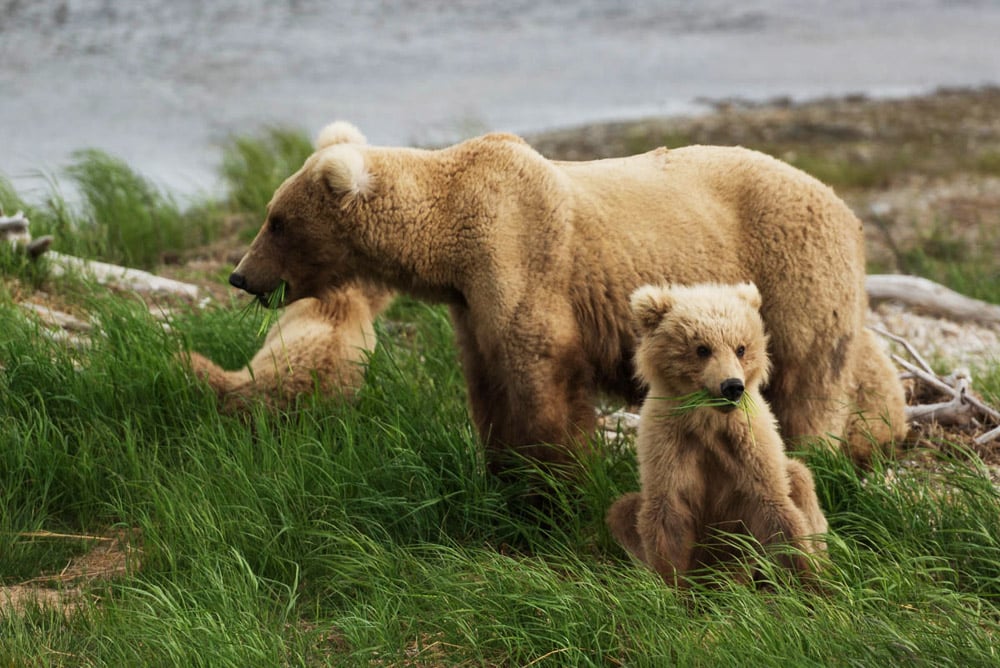 From mid-May until mid-July the breeding season in Katmai National Park is drawing to a close: The males having some respite from their aggressive and competitive battles for dominance. The salmon runs will happen next month. But time spent studying the bears this month will be rewarded.

The spring meadows of Hallo Bay in Katmai National Park are now lush with sedge grass and the tidal flats full of clams. The omnivorous nature of the bears is well suited to the changing seasons. You will see bears munching blades of grass, grubbing for roots, and vigorously extracting clams from the mud at low tide.

This is the season to see mother bears with their new cubs, and the first signs of bears rubbing, so their fur is still in good condition.

Tip: Read our Alaska in May and Alaska in June guide if you are planning to visit during these months. 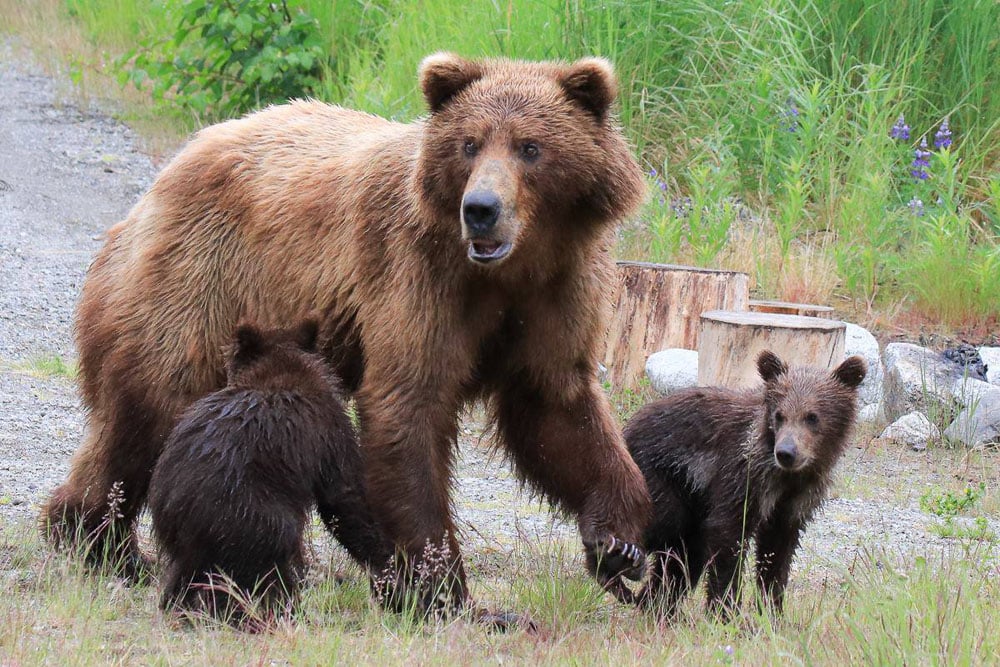 The beautiful coastal blooms and the fireweed flowers in Katmai National Park are at their most prolific now. The bears are starting to move inland to the rivers. The nutrients from vegetation and clams are no longer sufficient now that the plump chum and pink salmon are starting their runs.

The most dominant bears command the best fishing sites with their subordinates having to make do with the less productive spots up or downstream from them.

The bears exhibit their strength and agility in catching the salmon as they cross the shallow gravel beds. There are no natural traps in the Hallo Bay rivers like the local Brooks and McNeil Falls to help the bears. This display of raw power represents bear viewing at its most spectacular.

The bears are now losing their old fur by rubbing more energetically in preparation for their new winter coats. You may also be fortunate enough to see wolves!

Read our monthly guides, if you plan to visit other places in Alaska during July and August. 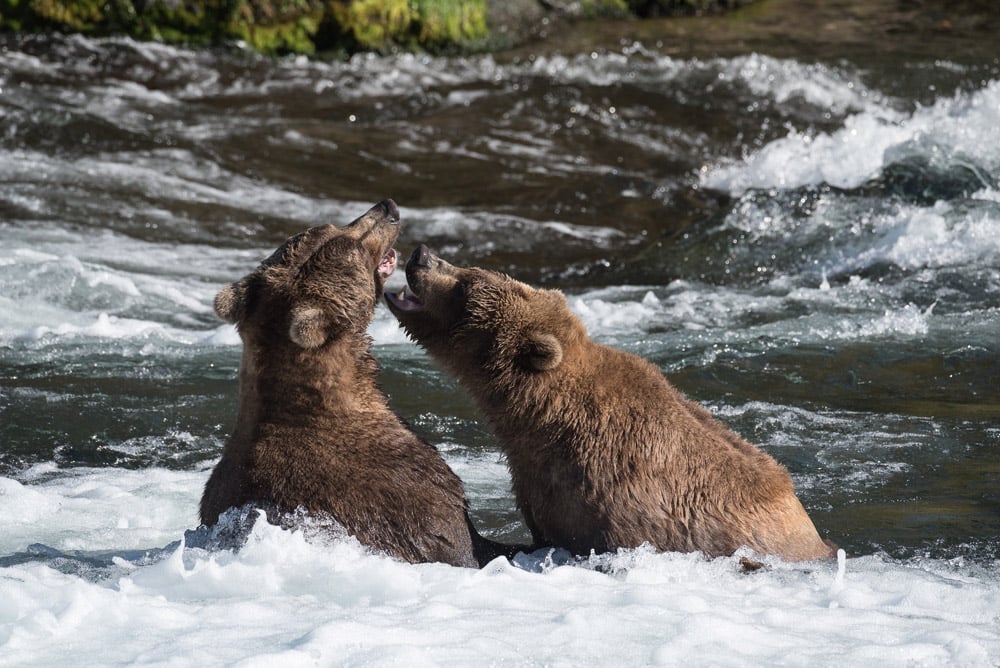 In late August, as the days are drawing in at Katmai National Park and the bears are displaying the start of their new winter fur. The Coho salmon are just starting their spawning runs. The chum and pink are completing theirs. The bears seem to prefer the Coho because they are heavier and fatter. The Coho run is also the largest on this coast in Katmai National Park and may continue until October.

The bears are now back to their mixed diet of fish, mushrooms, and mixed berries, preparing for the cold winter ahead. 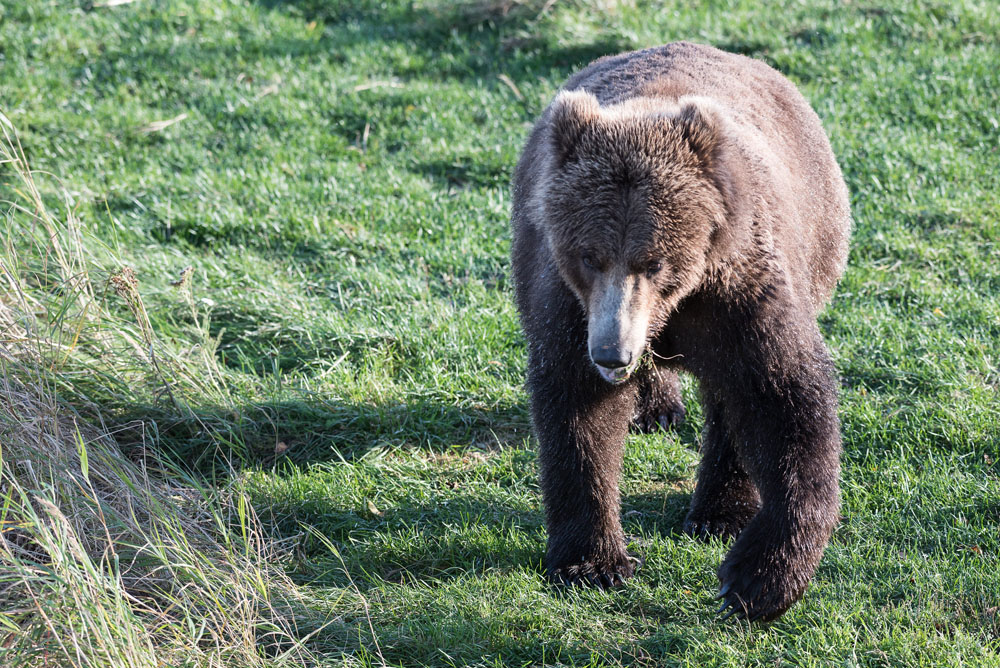 From September to October, the Fall colors provide a beautiful backdrop in Katmai National Park. The days draw in and the bears spend much of their time resting along the rivers and beaches. The weather is now interrupted by sudden bursts of rapid storms.

You may see the bears, resplendent in their winter fur, feeding on the old salmon that have finished their life cycle after spawning, but new Coho may still be making their way upstream. Berries are also an important part of the bear’s’ diet at this time 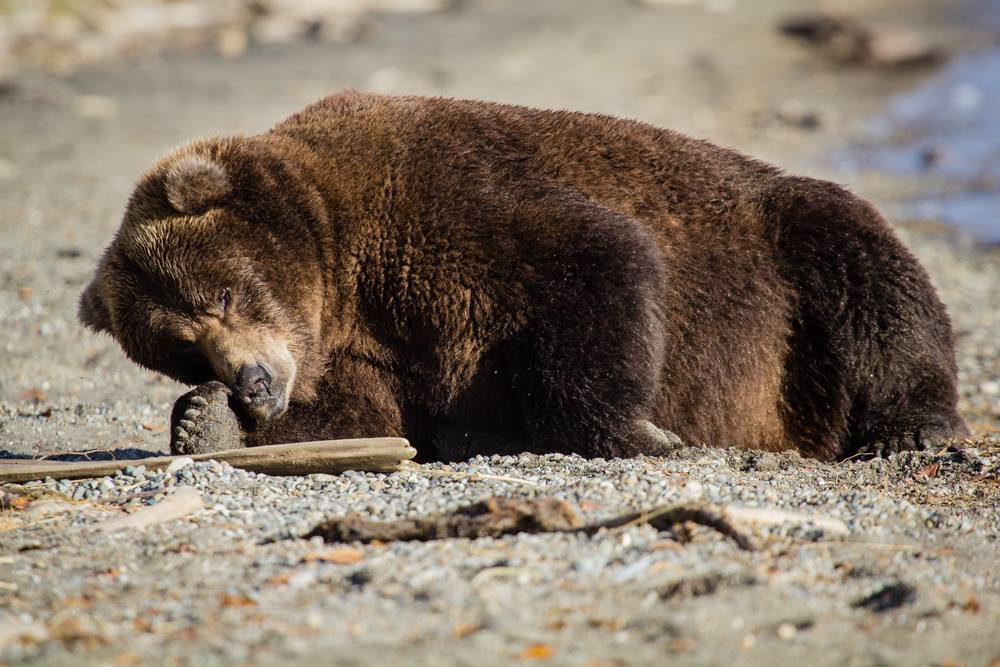 A more unhurried pace in Katmai National Park as the large winter storms (often lasting for days) now become common. This determines the time for the bears to prepare for the winter months.

Bears are hibernating and mother bears give birth at this time in Katmai National Park. 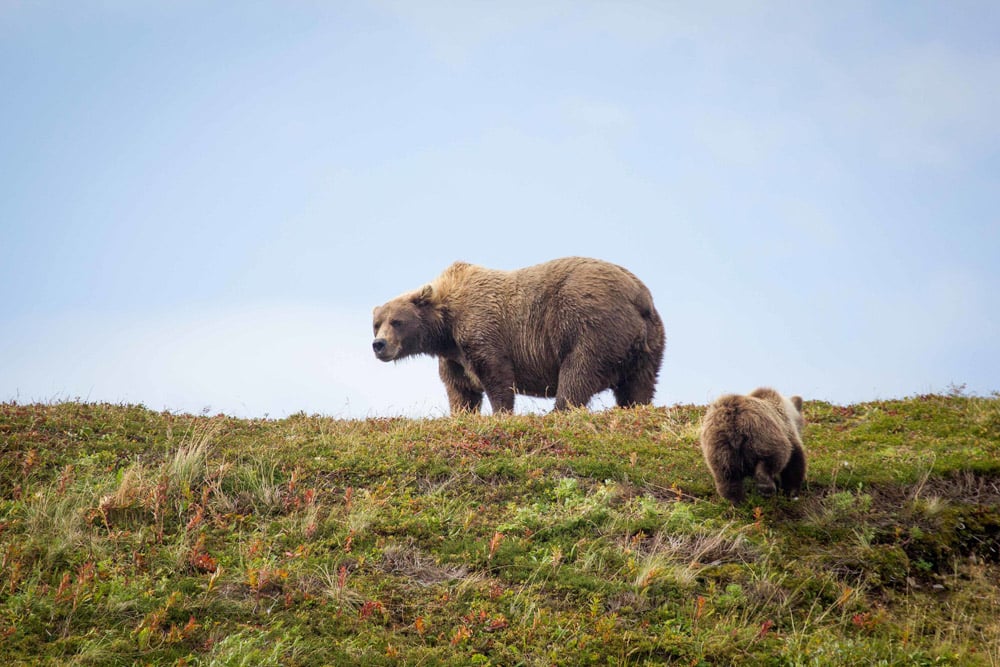 This is a post-denning time, and bear movement may be seen close to their dens on the snow-covered upper slopes. On the coastline, it is too early for sedge grass and goose tongue, so the bear movement is less predictable at this time as they grub for roots.

The large males are starting a new breeding season by displaying acts of dominance. April to early May is not a good time to view bears in easy to access areas.

The Homer Inn and Spa has spectacular views. It’s located quite close to the airport and the town center. Explore more hotels nearby in Homer.

If you plan to visit Katmai National Park, you will experience the pure wilderness. This is a once in a lifetime adventure you will never forget!

The best time to view bears catching Salmon is around August to mid-September. In June and July, you can spot the bears eating grass or even clams. There is a chance to spot wolves and foxes as well.

Special Tip: If you are interested in fishing, even as a beginner, check out our new guide about ‘The Best Time to Fish in Alaska – The Best Places – King Salmon and Other Species‘. It contains tons of great tips for a fishing trip in Alaska. 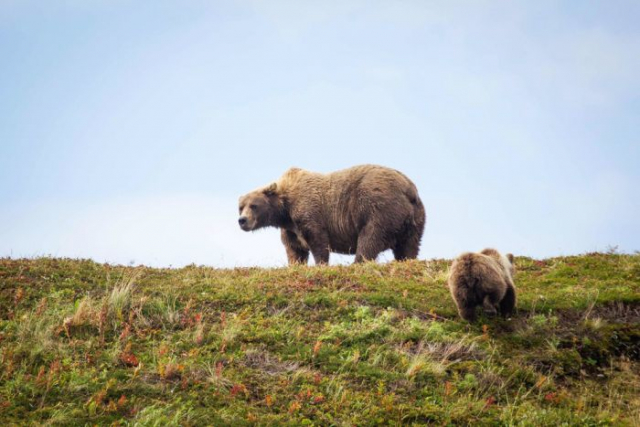 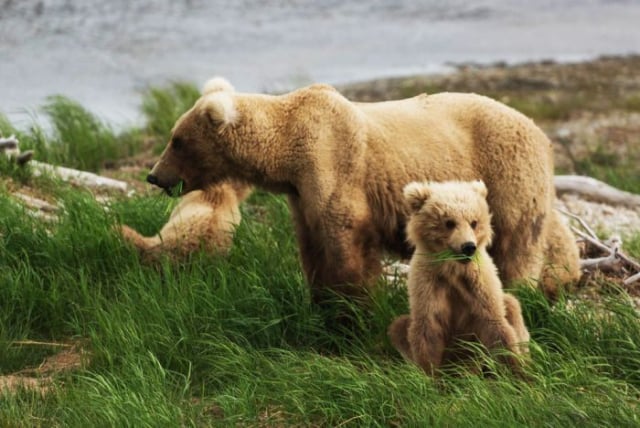 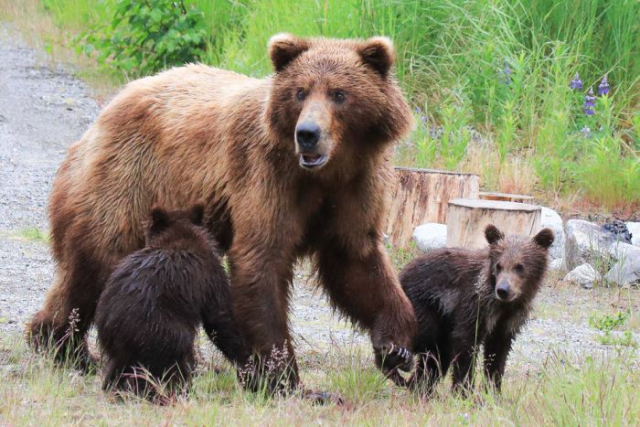 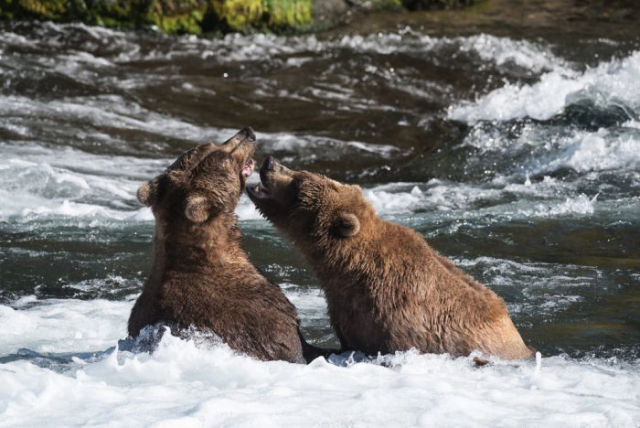 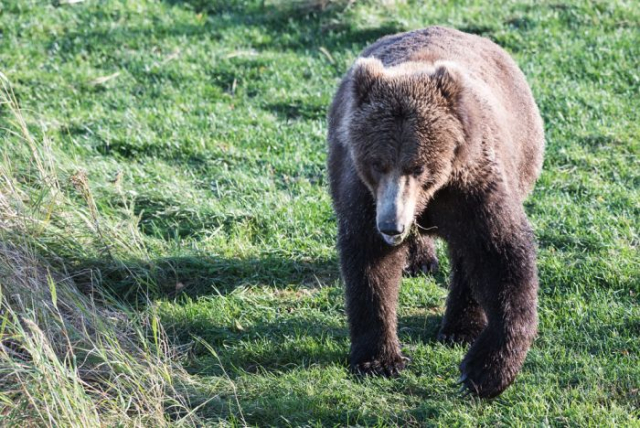 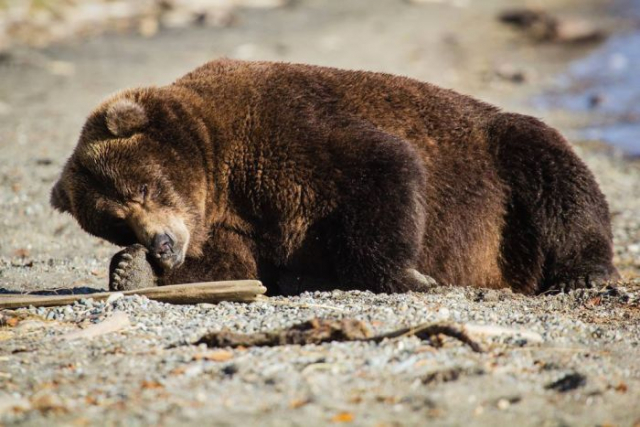