Are you hopping on a plane and heading to London in October? Before you set off, make sure that you know everything important to know about London throughout this month.

This article is full of tips and insight from our London residents about:

Is October a Good Month to Visit London? 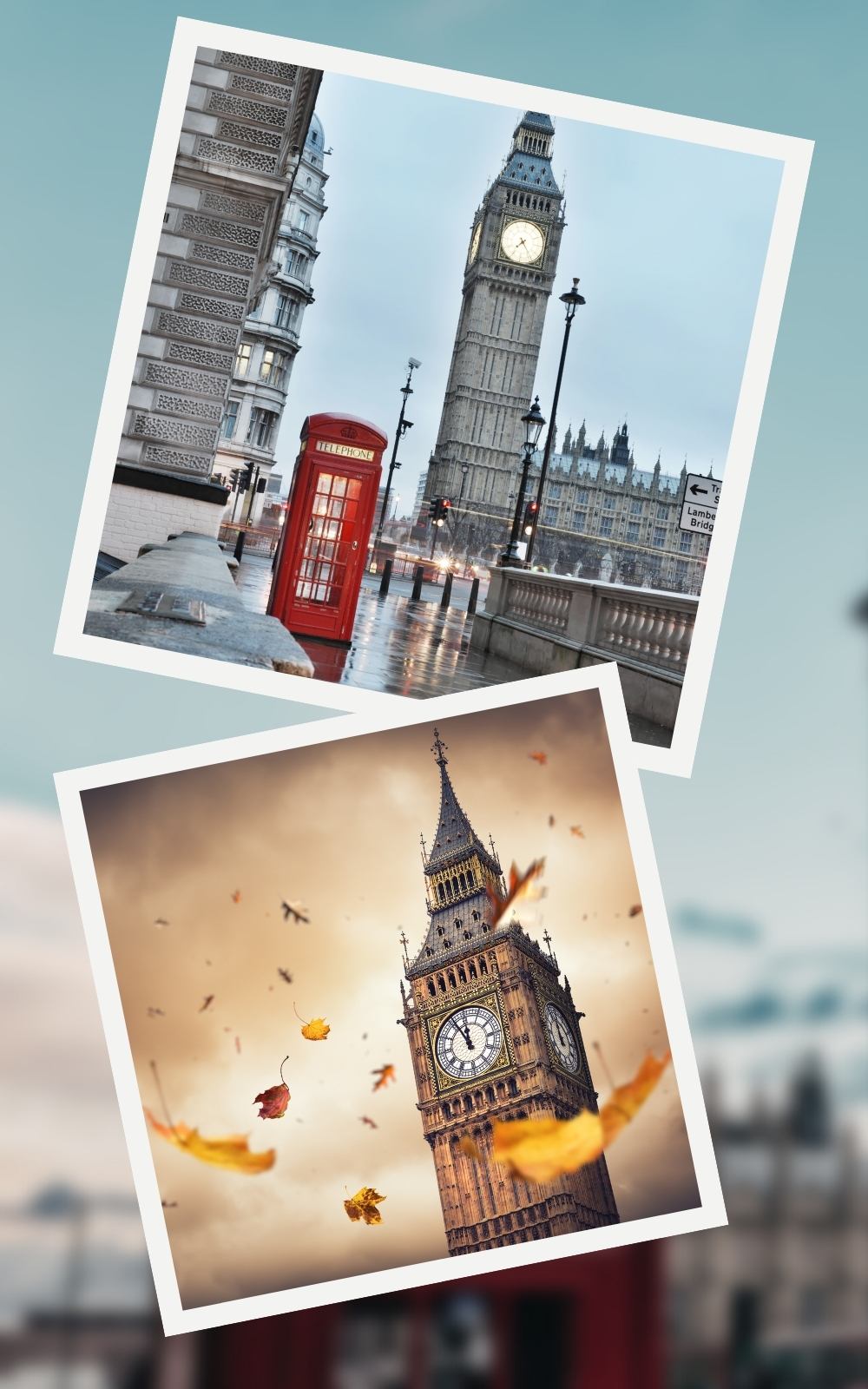 October is a very good time to visit London. The first three weeks of October are outside of the peak season, so you will find that London feels quieter, and it is easier to get into the popular attractions. The weather is milder than in the previous months.

Although there can be rainfall and cooler temperatures, there are days when the sun will be out, which creates a fresh feeling.

With Halloween falling in October, you will find that London is geared up and ready to celebrate the holiday. Stores will be decorated and sell spooky merchandise. Bars and restaurants will have Halloween-themed menu items. The London Eye will even be lit up for a week at the end of the month in orange and green to mark the occasion.

It is important to note that the last week of October is also a national school holiday, so London will be considerably busier than at the start of the month.

For the fans of the books or the movies, the Harry Potter Studio tour is a must-do in October. It’s 100% worth it! Our other top picks are the London Eye and the entry ticket to The Shard.

💡 We highly recommend making reservations for the popular tours in advance! Of course, you are free to book any other tour (London Activities) or try buying a ticket later. 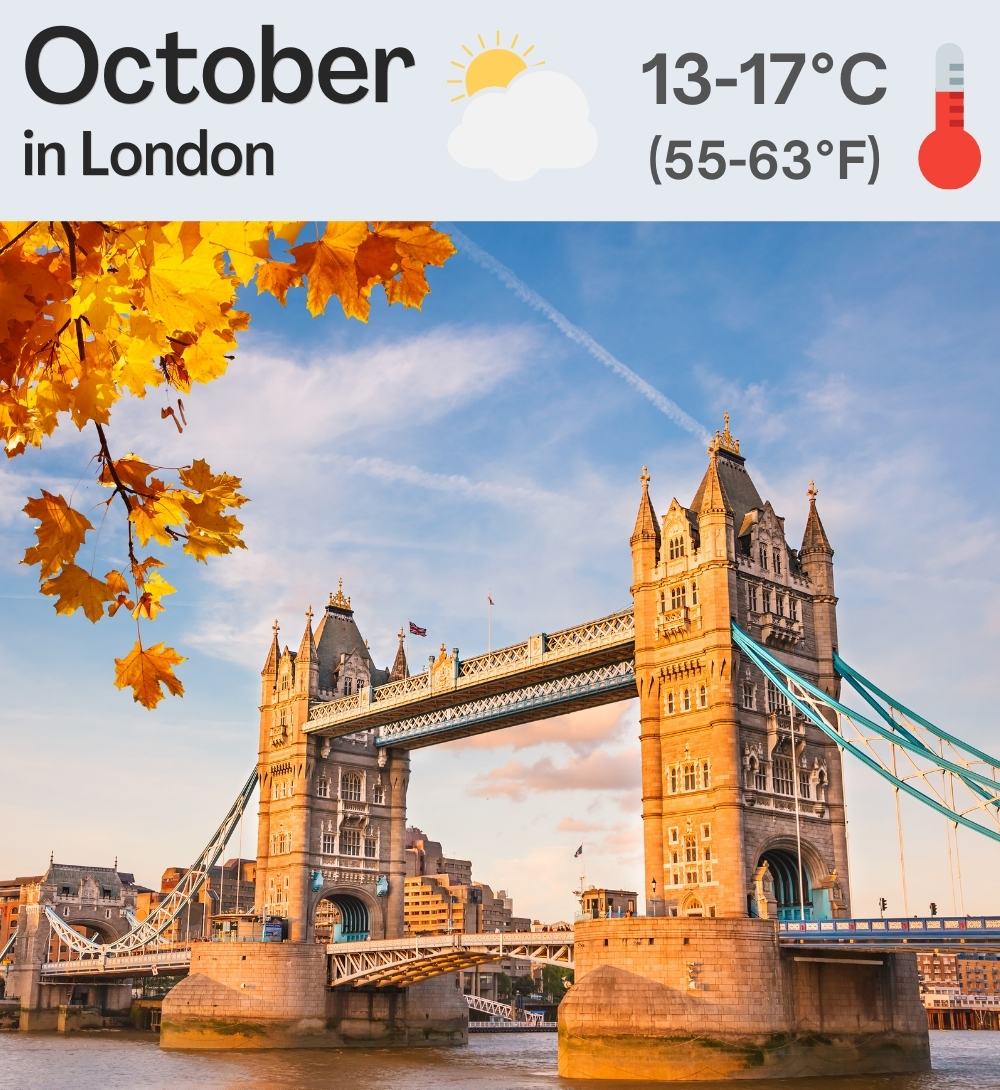 The weather throughout October can be very mixed. There will be days of rainfall; however, the temperatures will still be in the double digits, and there can be dry, crisp and sunny days.

The average high temperature can also vary depending on the time of the month you go. The start of October is usually slightly warmer than the end of the month:

If you are visiting London in October, it is likely you will see rainfall. The forecasts predict there is a 34% chance throughout the month of October, and typical rainfall reaches an average of 52mm, so remember to bring a waterproof jacket or umbrella.

Throughout October, you will need to prepare for colder mornings and evenings as temperatures could go as low as 7°C(45°F).

Typical daily temperature progression during a day in mid-October:

The chance of experiencing snowfall during October in London is very low. There was unexpected snow in 2008 during October. However, this was the first October snowfall since 1934. 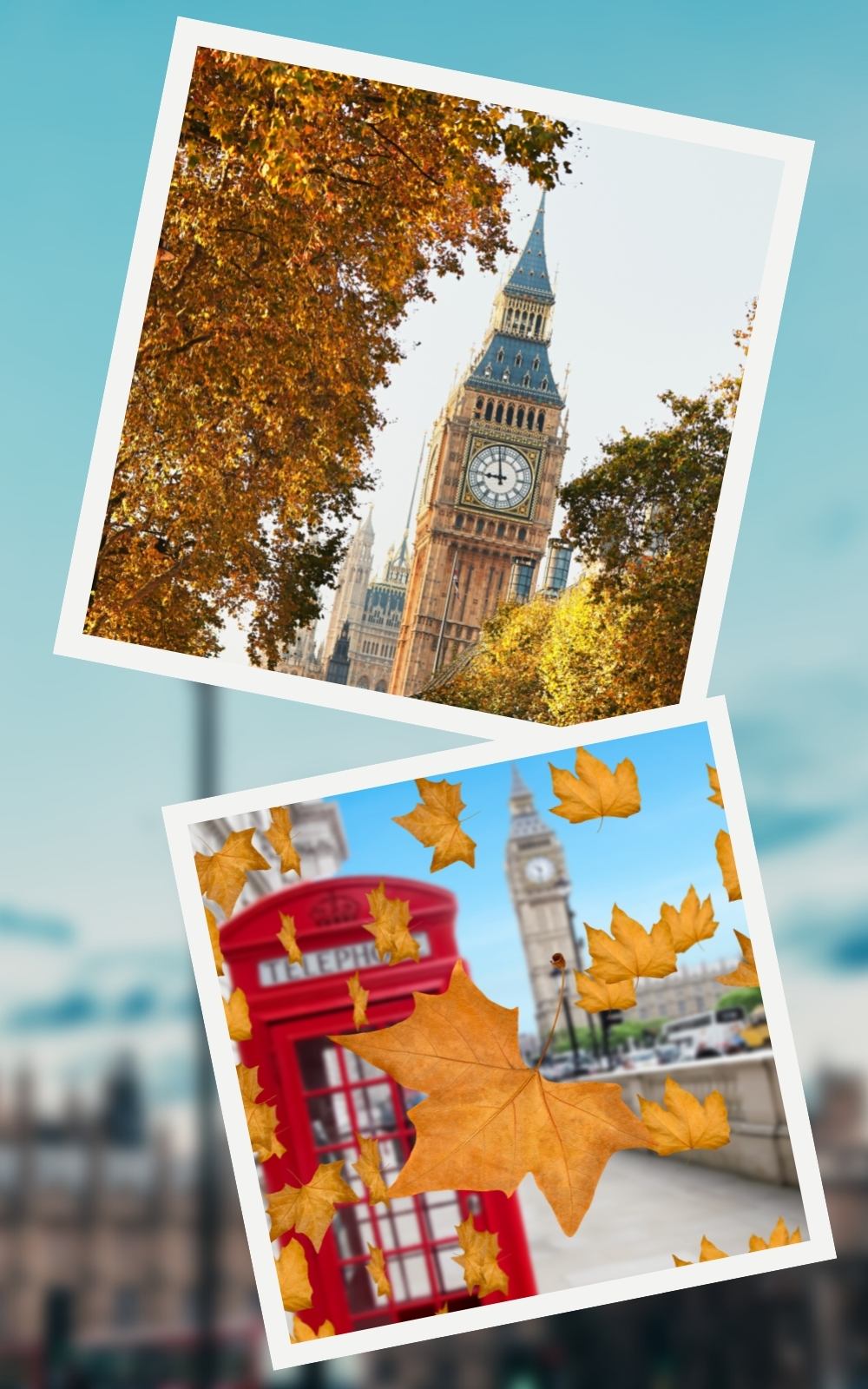 October is the best time in London for viewing vibrant and gorgeous fall colours.

Usually, the leaves in London begin to change colour around mid-October, with peak time near the end of October. However, the time can vary. When you can expect to see the leaves change colour depends on the weather in the preceding weeks.

What to Wear and Pack

In October, we recommend that you pack for layering in London. In the morning wear a t-shirt with a jumper and a light jacket, but take a raincoat or umbrella with you. Towards the afternoon, you can usually lose the jacket and enjoy the warmer temperature.

Throughout October in London t-shirts, trousers, land ong dresses with a jacket will usually suffice in the daytime. During the evenings, you will need to wear sweaters and a thicker jacket.

Despite the chances of cooler temperatures, London can still be enjoyable if you pack for different types of weather.

💡 In recent years, October here in London isn’t as cold as it used to be. A lot of people now can wear t-shirts throughout October with a jacket. There are mild days where a long sleeve plus a jacket would be too warm.

Whether it is sunshine or rain, there are plenty of indoor and outdoor activities to do across the city, so you can still have a fun time if you remember to take your rainproofs and sunglasses with you!

Crowds and Rates – Is It busy? 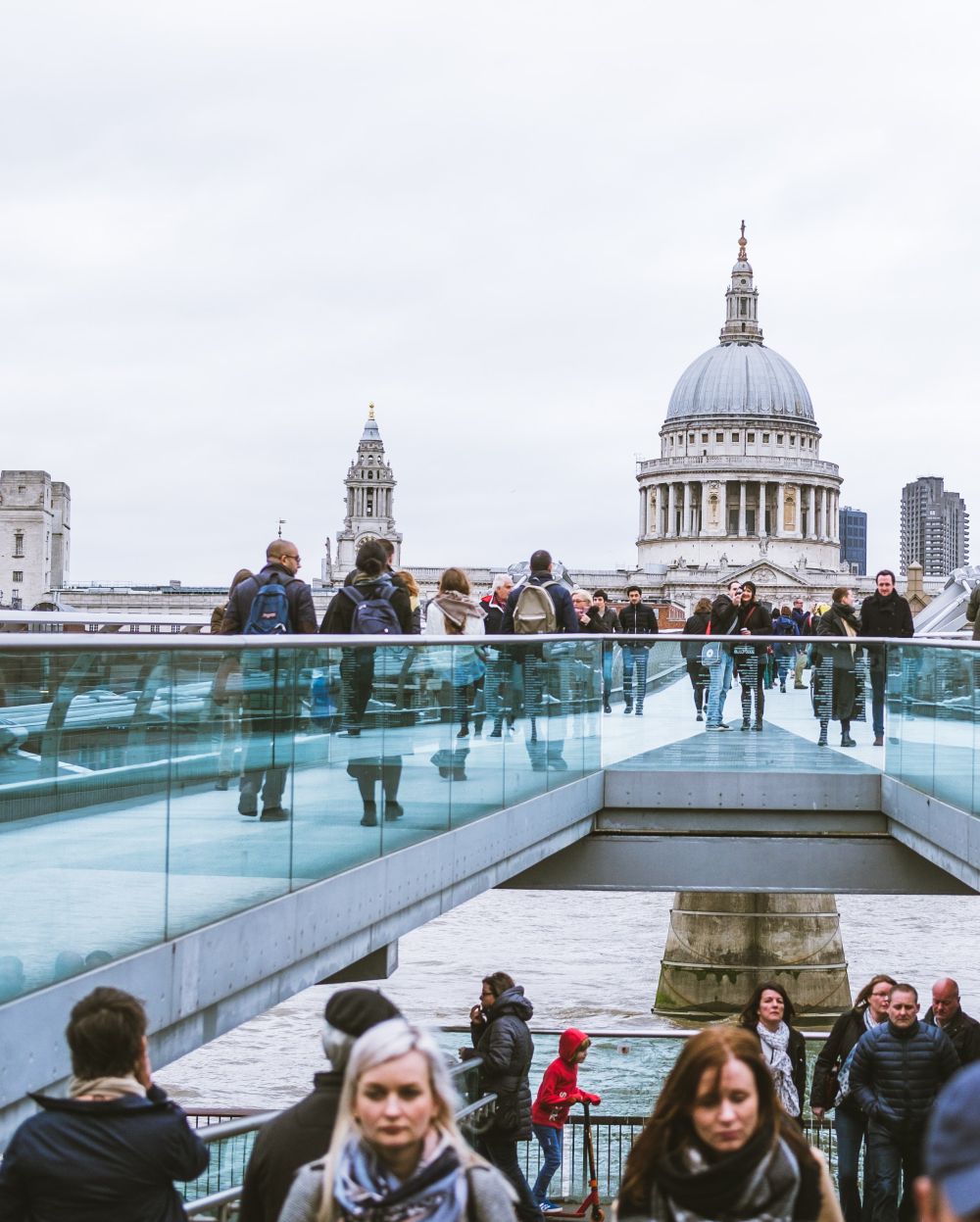 Although London is known to be busy all year round, there are times when the city can feel slightly quieter.

The first three weeks of October are not too busy in London. There are fewer crowds and queues compared to the height of summer. The last week of October will become busier, with school holidays starting and families from around the country traveling to the city to spend their time off.

October can also get busier with the return of the London Marathon. Since 2021, the event moved from April to October, so be prepared for crowds of people and road closures on the first weekend of the month. However, October is a great time to join the celebrations and support the runners along the streets while the weather is not too cold.

💡 It is also important to note that the underground tubes will be busy during commuting times (8am – 9.30am and 4.30pm – 7pm), but will be quieter in the daytime and evening, so we recommend traveling outside of these hours on weekdays.

The first weeks of the month, when it’s less busy, are a great time to check out museums in South Kensington, such as The Natural History Museum and The V&A. You will be able to view the exhibitions at your own pace and walk around without the disruption of big crowds around specific displays.

It is also the perfect time to visit The Tower of London, one of the city’s most popular attractions. There are individual queues for tickets and security, so we recommend pre-booking online to skip one of them.

Rates: Hotel rates will typically cost the same compared to the previous month during the three couple weeks of October. Towards the end of the month, when school holidays and Halloween starts, prices will increase. Hotels outside of Zone 1 can be cheaper than those in the city centre.

Things to Do – Our Tips

Despite the cooler temperatures, there are still plenty of things to do across the city and all the attractions are still open for business. Head to Buckingham Palace to watch the Changing of the Guards at 11am each day (except Tuesday and Saturday!).

Or, walk around Covent Garden and explore market stalls and boutique shops. For thrill seekers, head to one of the indoor high points of London at the top of The Shard, The Gherkin or The Walkie Talkie building and experience extensive views across London at an exciting altitude.

During October, visitors can enjoy a tour of the Queen of England’s official residence. The tours of the palace are only available from July through to October, so it is the perfect activity if you are visiting during October. The tour will take you to the infamous Throne Room, Ballroom and the Grand Staircase as well as the manicured Palace Gardens. Make sure that you book tickets in advance to secure your slot.

Do you love the film Harry Potter? Step into the magic by visiting the Warner Bros. Studio Tour and experience authentic sets, real costumes and behind-the-scenes secrets. Walk the streets of Diagon Alley, sit at the table of the Great Hall, wander around Dumbledoor’s office and take your own ride on a magical broom. This is the perfect activity for October when the weather is turning cooler and you are looking for a fun, indoor activity.

With Halloween around the corner, why not take a trip to The London Dungeons? Located on The South Bank, The London Dungeons is an immersive and interactive delve into London’s spooky history. Learn about the legend of Sweeny Todd and hear about the terror of Jack the Ripper. You will even experience what life was like when The Tower of London was an actual prison.

Get up close and personal with international celebrities at London’s wax figure museum. Stand shoulder-to-shoulder with Beyonce, Rihanna, Ed Sheeran and even the Royal Family! October is the ideal time to go when it is outside of peak season as you will be able to see the figures much easier and the queues for the more popular celebrities will be shorter.

Hands down one of London’s most popular attractions, the Tower of London is a must-see. Built in 1086 by William the Conqueror, visitors can explore the medieval palace, the infamous prison, the Bloody Tower and the guardians of the tower – the Ravens! Queues for the Tower are typically long all year round, so try to avoid during the last week of October when school holidays restart. In the first few weeks of October, try going early in the morning when it is usually quieter compared to the afternoon.