Mesa Verde National Park is open year-round. Some facilities are closed during the colder season. We talked to dozens of local experts and visitors, to provide you with details about any visiting time. Make sure to read our 9 Must-Know Tips at the end of this article. 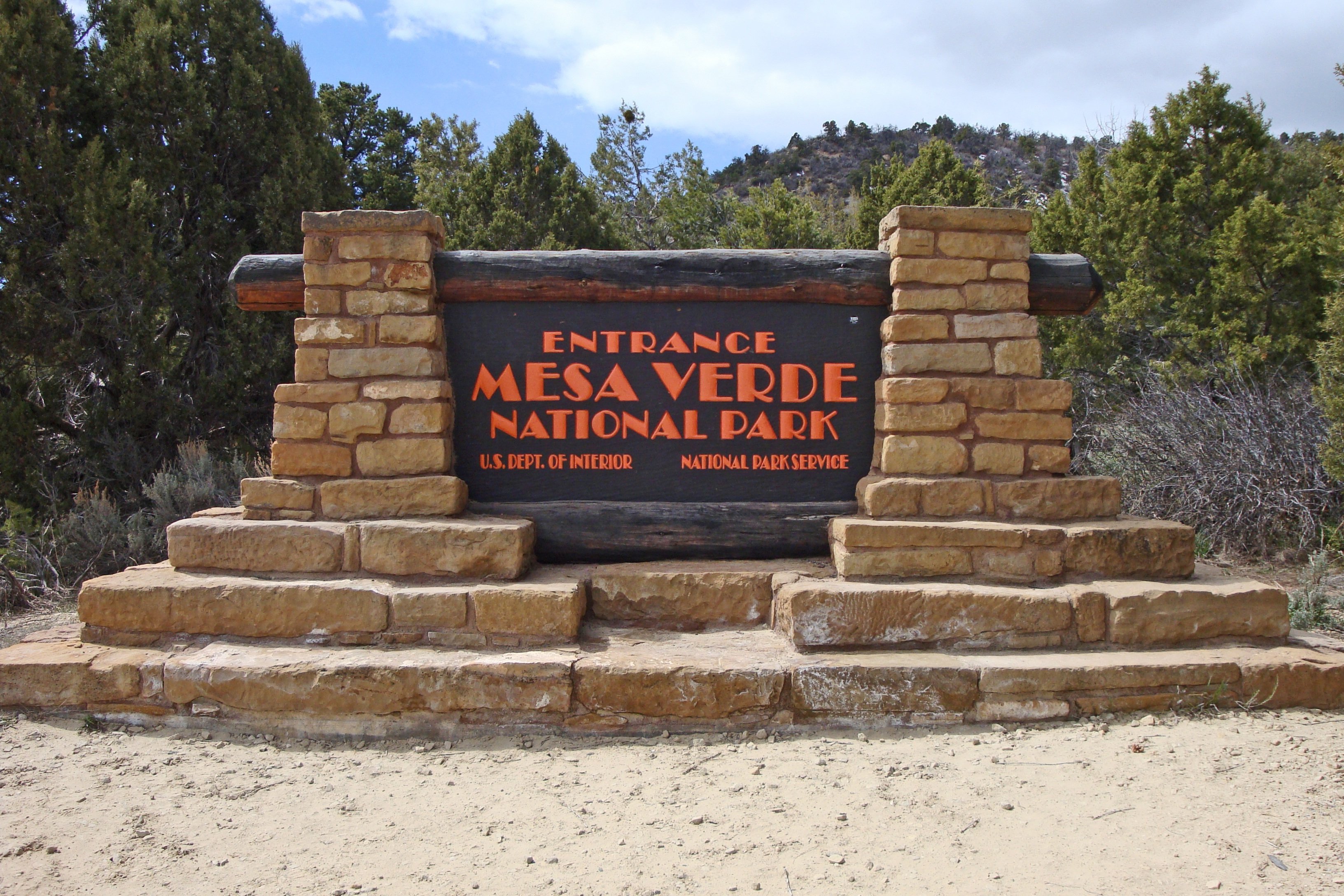 The best time to visit Mesa Verde National Park is in the spring and fall months. Both periods are pleasant times in terms of weather. Additionally,  you experience fewer visitors than during the packed summer season. 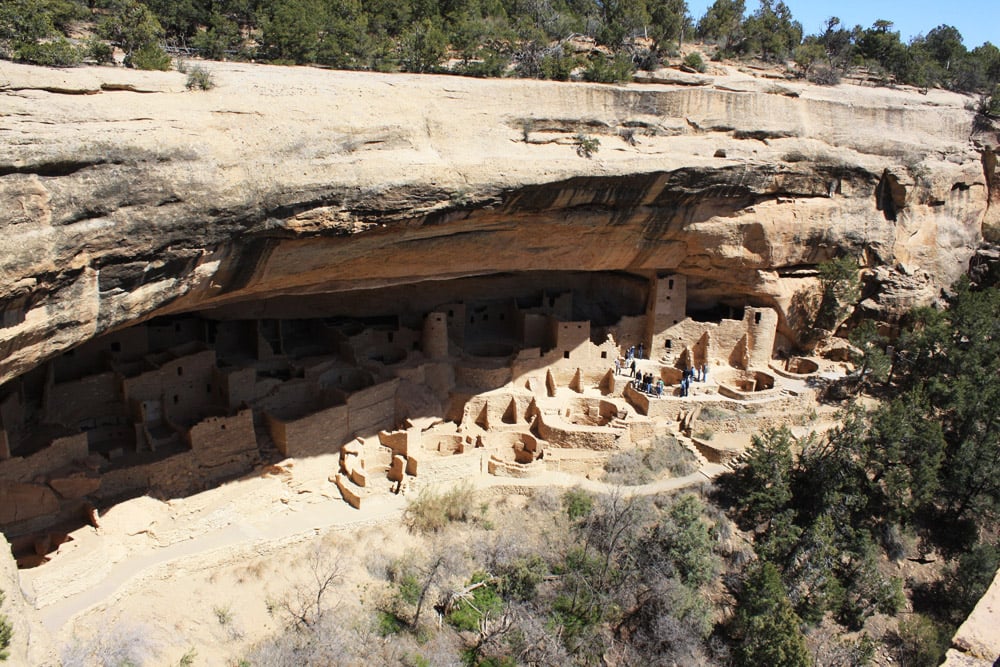 Spring can be a pleasant time of year to visit Mesa Verde, although it’s best to come prepared for chilly conditions by wearing warm clothing. On average, temperature highs range between 50°F and 70°F (10°C and 21°C) but these numbers drop in the mornings and evenings, sometimes falling below freezing.

Rain and Wind: Precipitation is always a possibility during spring and there is a chance of snowfall in the earlier months, although it is usually not significant. This season also tends to be the windiest, with occasional gusty weather. 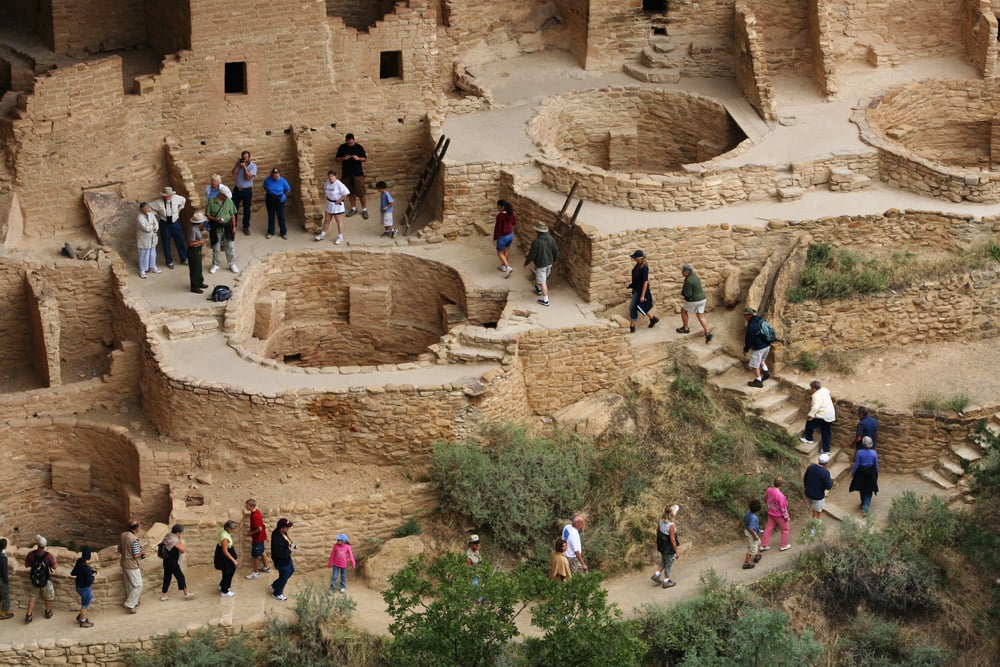 Summer is the peak tourist season in Mesa Verde and it is also the warmest time of year. You can expect average highs of between 83°F and 85°F (28°C and 29°C), making the summer season a comfortable time for being out and about. It can get hot around the middle of the day, so make sure to bring plenty of water, hats, and sunscreen to protect against the heat.

Rainfall is generally low in the summer, with less than 3.5 inches falling between the months of June, July and August combined. However, thunderstorms and sharp showers can be common in the afternoon and this is something to be aware of. 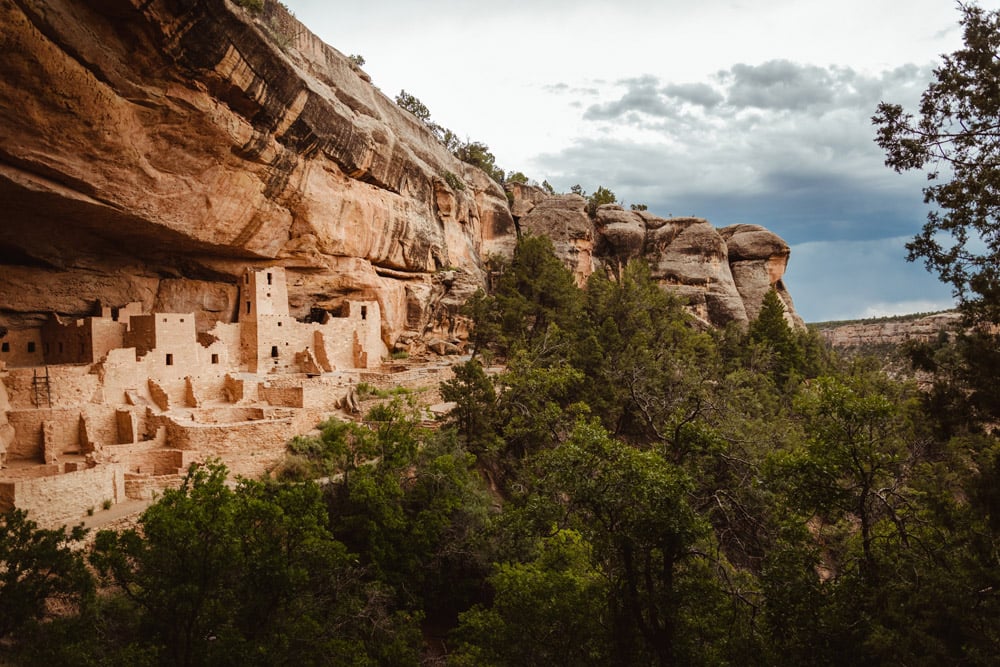 Fall is one of the best times of year to make a trip to Mesa Verde. There are fewer visitors in the park than during summer and there is a greater chance of sunshine, with an average of 17 sunny days each month. The temperature also begins to drop and this means you don’t have to worry as much about hot days, making the conditions more pleasant for walking or similar activities.

Cold weather and snow are both possible later on in the season, and this should be kept in mind when visiting. 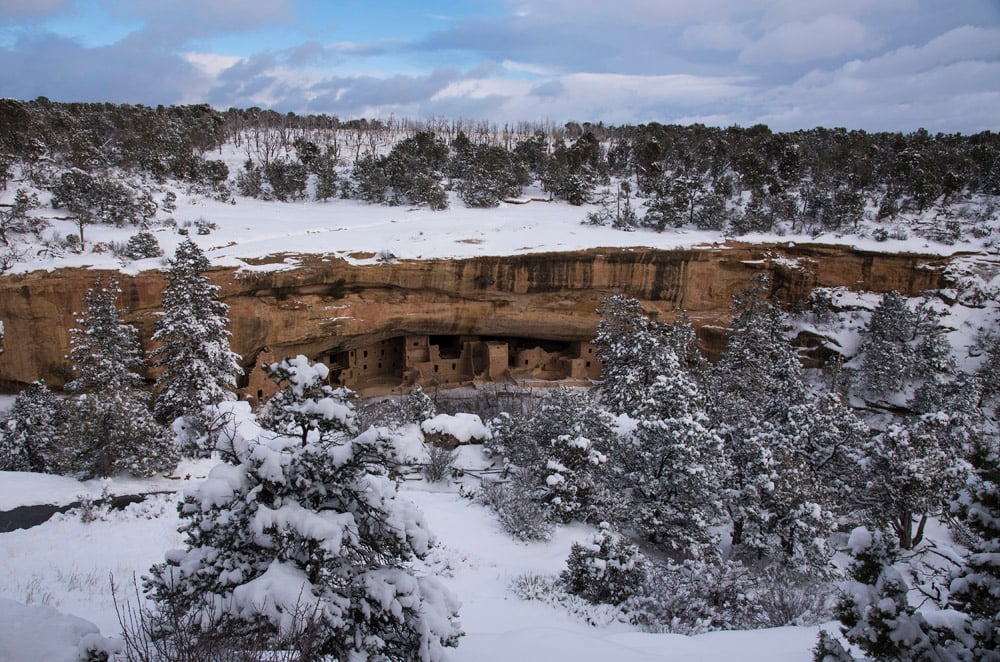 Winter can be a beautiful season in Mesa Verde, with the landscape often blanketed in snow. Despite the opportunities for picturesque scenery, it is a cold month and the snowfall can make it difficult to travel.

Average high temperatures range between 40°F and 44°F (4°C and 7°C), with average lows of around 19°F (-8°C). It’s therefore recommended to dress appropriately, with suitable hiking boots and warm, layered clothing. Although clear skies are possible, winter is usually the cloudiest season, with a large number of overcast days.

January in Mesa Verde is the coldest month of the year, with an average high of 4°C (40°F) and a low of -8°C (17°F). Precipitation is generally around average levels for the year, with 8 precipitation days. It’s best to wear warm clothing and come prepared for snow.

During February, the temperatures increase slightly, however it remains a cold month with a high number of snow days. Cloud cover is often heavy and there are around 9 precipitation days. The average high is 7°C (44°F) and the average low is -7°C (19°F).

March is the first month of spring in Mesa Verde, however it’s still a good idea to dress as if it’s winter because temperatures usually won’t climb above 10°C (50°F). The average low is -3°C (26°F) and you can expect around 9 precipitation days.

April in Mesa Verde National Park is slightly warmer, but this month is notable for being the windiest. The average high is 11°C (52°F) and the average low is 1°C (34°F), with 9 precipitation days. Snow is still possible until mid-April.

May is when you’re more likely to notice a significant change in temperature, with average highs of 22°C (72°F) and lows of 7°C (45°F). There are an average of 9 rainy days and this is usually the first month where you can avoid snowfall.

June brings some of the best weather to Mesa Verde, with long sunny days and warm temperatures. The average high is around 28°C (83°F), with a low of 11°C (52°F). There are usually 7 rainy days.

July is the hottest month in the park, so come prepared with plenty of water and protection against the sun. The average high is 31°C (88°F) and the average low is 13°C (55°F). Rainy days average around 15 and these often feature brief, thundery showers.

In August, the national park is at its busiest and the weather remains hot, with average highs of 29°C (85°F) and lows of 13°C (55°F). There are 15 rainy days on average – with thunderstorms a possibility – and the wind speeds are at their lowest.

September brings many sunny days and the weather is cooler than in summer, with an average high of 24°C (75°F) and lows of 9°C (48°F). There are usually 9 rainy days.

In October it’s slightly colder in Mesa Verde National Park, with average highs of 19°C (66°F) and lows of 4°C (39°F). This is another sunny month and rainy days average around 7.

During November, Mesa Verde is once again brought snowy weather, so come prepared for this scenario. The average high is just 11°C (52°F) and the average low is -2°C (28°F), with 7 precipitation days.

December in Mesa Verde is a cold month, with average highs of 6°C (43°F) and lows of -6°C (21°F). Warm clothing is certainly recommended and you can expect around 9 precipitation days. 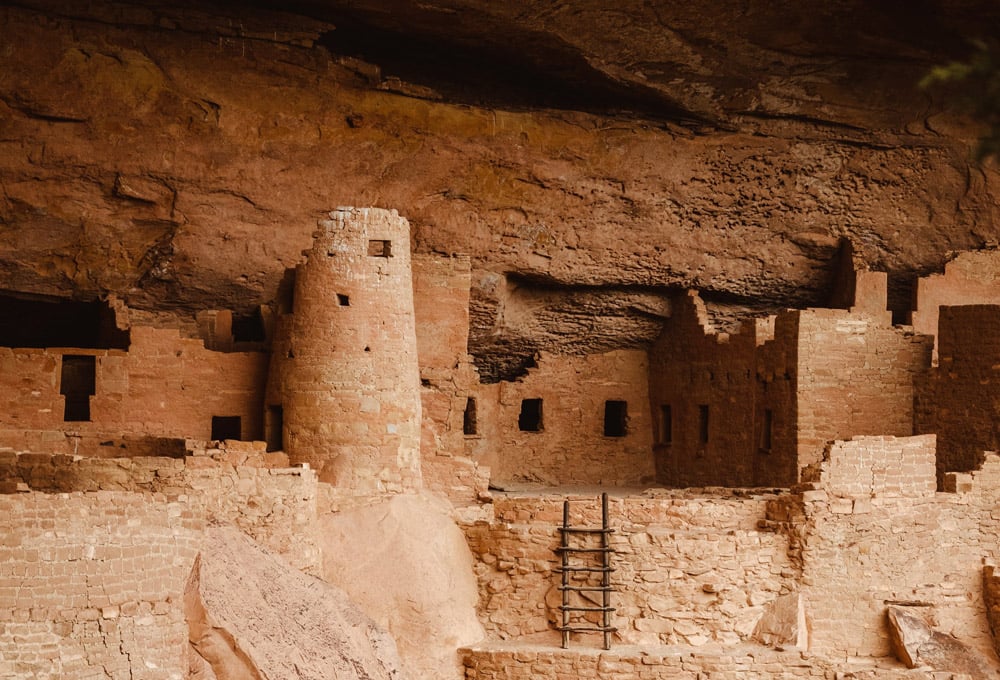 Some of the most interesting sights to see around Mesa Verde are the park’s ancient cliff dwellings. These structures were once home to the Ancestral Puebloan people – a group of Native Americans who lived in the Mesa Verde region.

Some of the overlooks can be accessed via the Mesa Top Loop Drive – a 10 kilometre road which circles around many of Mesa Verde’s top archaeological sites. The road is open daily from 8 a.m. until sunset and can be a great way to get as much out of your trip as possible. 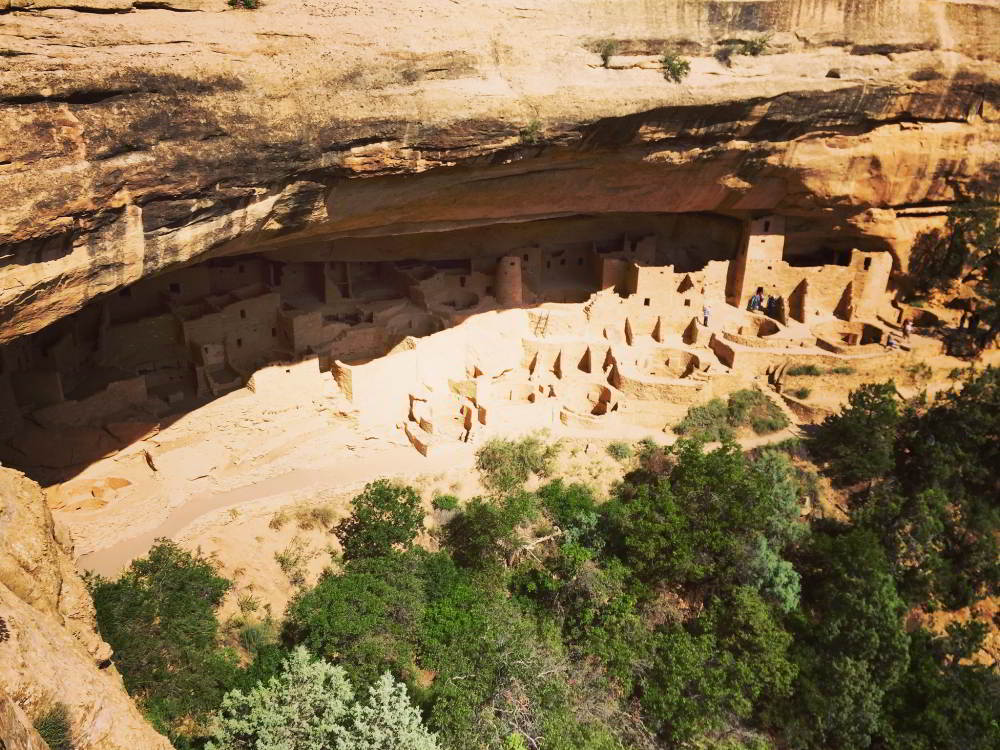 Cliff Palace is the largest cliff dwelling in the area and has been very well preserved in the 700 years since it was constructed. Situated in an alcove at the centre of the Great Mesa, the cliff dwellings include 150 rooms, built over multiple storeys. They’re quite an incredible attraction to see and can be viewed easily from Sun Point View, on the Mesa Top Loop Drive.

For up close and personal views of Cliff Palace, ranger-guided tours are available with the purchase of a ticket. These tours normally run every half hour in peak season and include a short, circular walk that combines an exploration of the cliff dwelling. 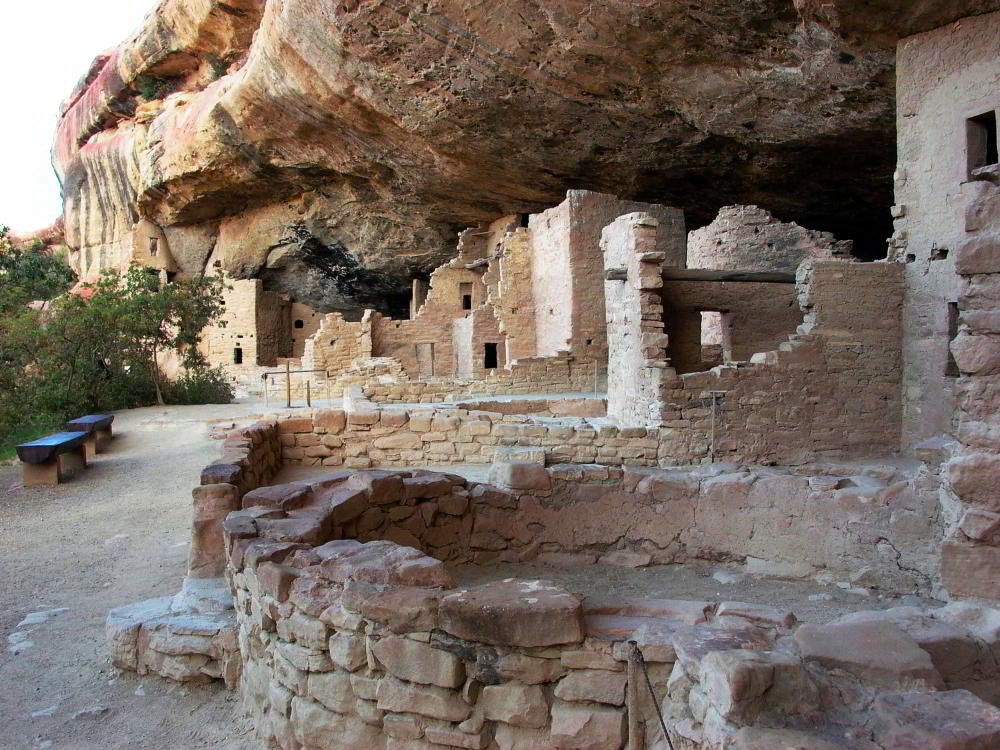 Another large cliff dwelling is that of Spruce Tree House, just a short walk from Chapin Mesa Archaeological Museum. Built into a natural alcove in the rock, this dwelling features 130 rooms and 8 kivas – thought to have housed between 60 and 80 people at one point.

Spruce Tree House has unfortunately been closed to visitors from 2015, due to safety issues arising from potential rockfalls. Despite this, it can be viewed easily from the overlooks near the museum and can still make for an interesting visit. 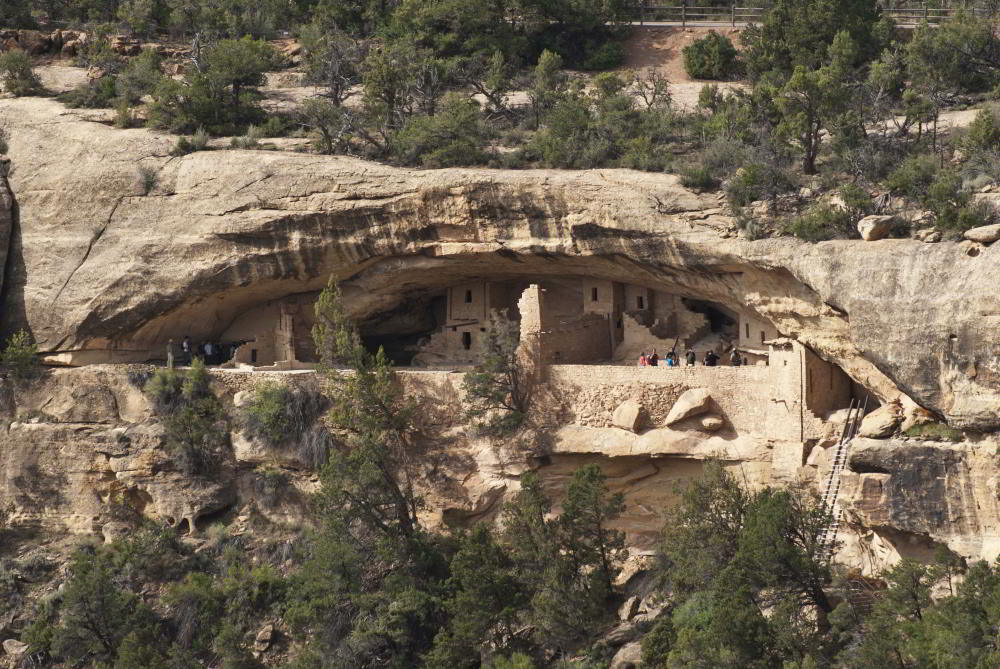 Balcony House Overlook is the third major cliff dwelling in Mesa Verde and is home to 40 rooms and 2 kivas. Despite being smaller than some of the others, it is well worth the trip and visitors can enter the buildings via ranger-guided tours. The tours require a ticket and involve a fair amount of physical activity, as the route includes crawling through a 12 foot tunnel and climbing a 32 foot ladder.

The reason the dwelling is so tricky to access is that it was designed to be easy to defend by the people who lived there, with just one entrance and exit. Tours of Balcony House usually operate from May until September, after which the cliff dwelling is closed. 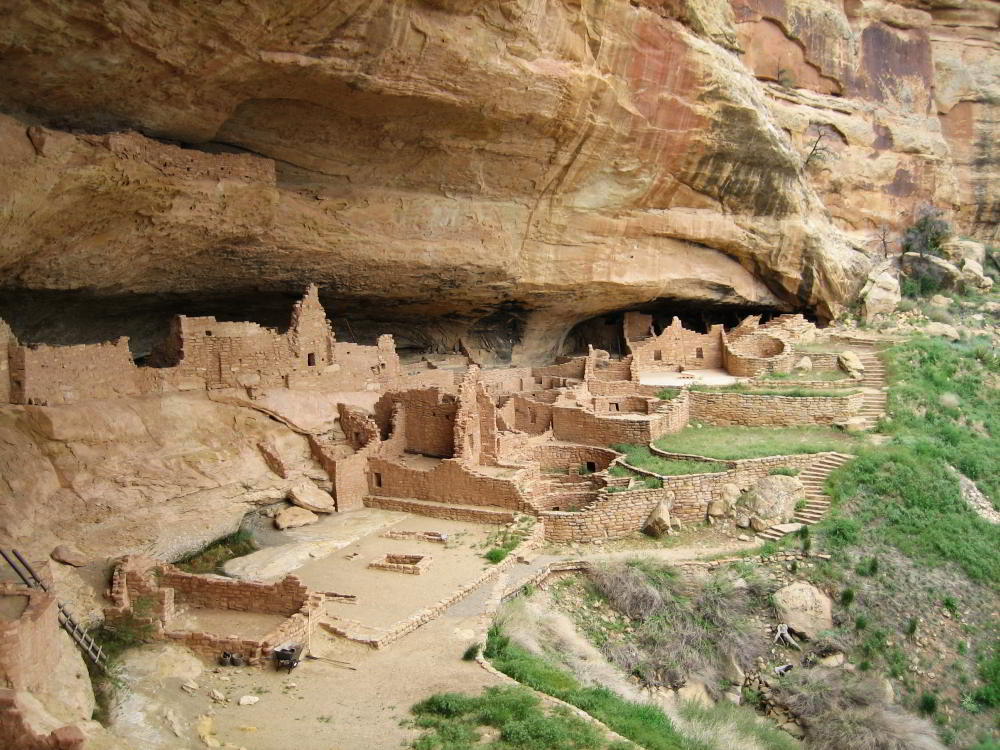 Situated on the Wetherill Mesa, Long House is the second-largest cliff dwelling in Mesa Verde, with 150 rooms, a tower and a central plaza. The settlement is thought to have been constructed somewhere around the year 1200, likely making it over 800 years old.

Guided tours are available for Long House and these usually last up to two hours, making them the most in-depth cliff dwelling tours in the park. The circular route covers a distance of 3.6 kilometres and includes several large ladders, with the tours usually running every few hours. Tickets are required and the cliff dwelling is usually open from May until October. 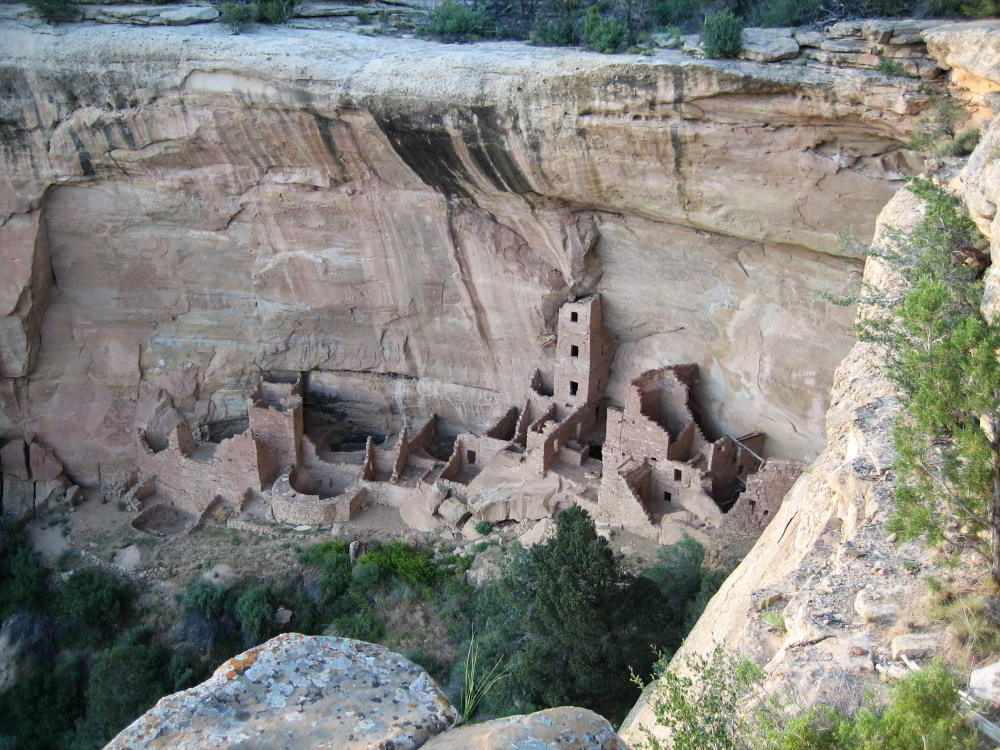 700 years of Mesa Verde history within a short drive: The Mesa Top Loop Road is only 6 miles long. Here, you can visit twelve archaeological sites on short paved trails. First and foremost are the fascinating cliff-dwelling overlooks. Highlights include Square Tower House Overlook and the view of Cliff Palace from Sun Point View. Mesa Loop Road is open every day from 8 a.m. until sunset. 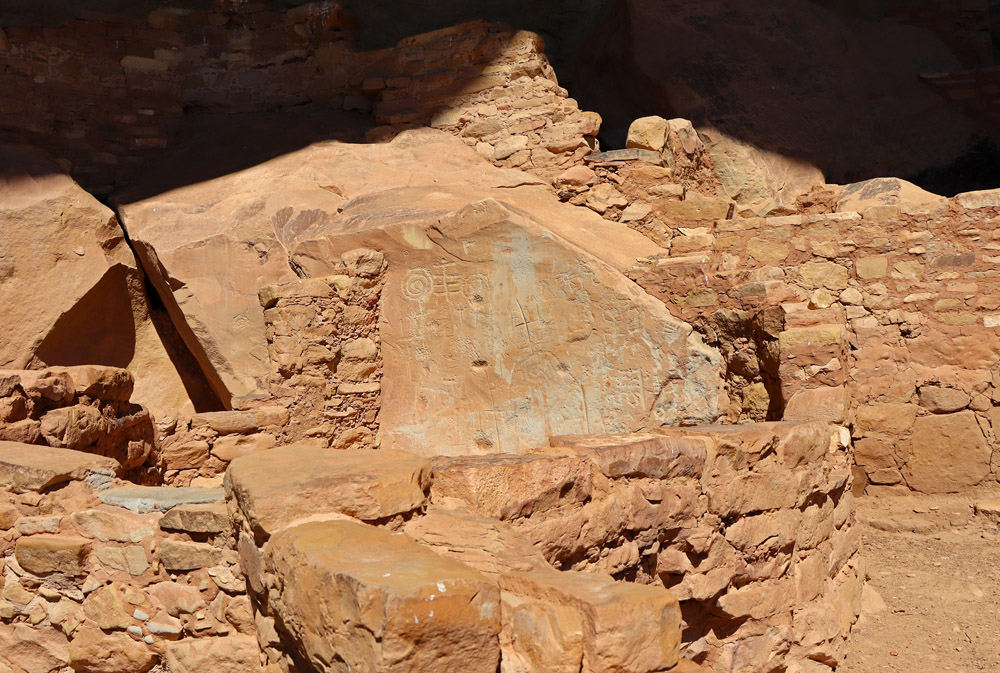 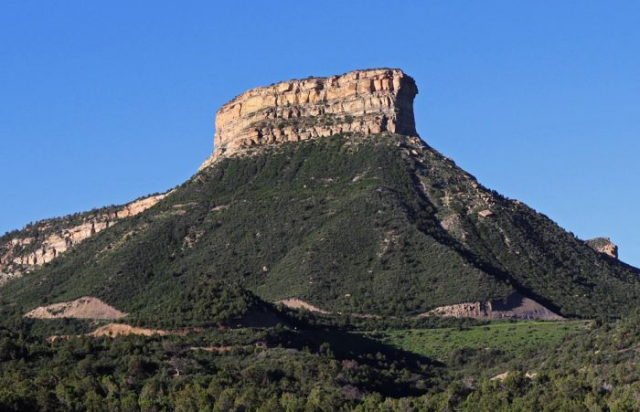 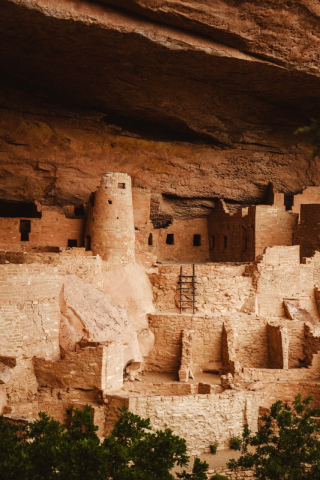 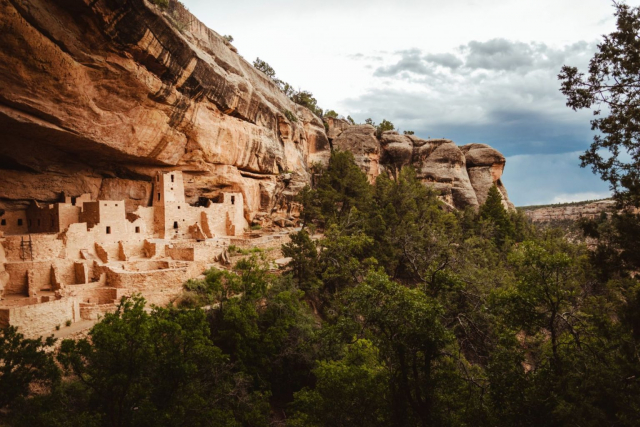 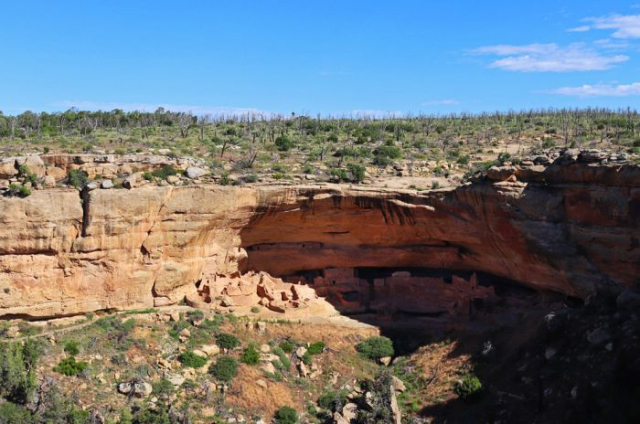 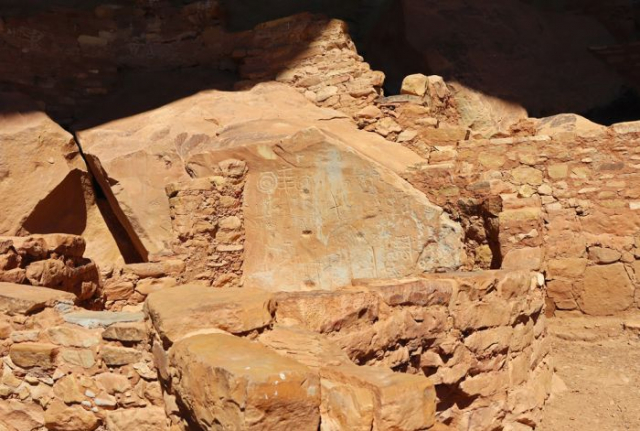