Nazaré, Praia do Norte is where you can experience the biggest surfable waves on our planet.

Nazaré and its Waves

Located around 100 km (60 miles) to the north of Lisbon, Nazaré is a seaside town on Portugal’s western side. Facing the Atlantic Ocean, this town is renowned for its incredibly high breaking waves. The wave height at Nazaré often exceeds 20 meters (65 feet), and occasionally reaches more than 30 meters (100 feet).

As well as being a seaside destination that is popular with visitors, it is also well-known by surfers, who come from all over the world to ride the large waves here. In the early days, Nazaré was known to most travelers as a fishing village and beach resort. However, the locals have been capturing the waves here since the 1960s.

We visited Nazaré multiple times during the big wave season (see below), and the magical sight of this spectacle simply blew us away.

The big waves occur because of an undersea canyon. The vast popularity started with Garrett McNamara in 2010 when the city of Nazaré invited international professionals to promote surfing here in winter.

Today, McNamara & other surfers even have their homes in the formerly sleepy coastal town. That means they are ready to go and surf the big waves as soon as they occur.

When is Big Wave Season | The Best Time 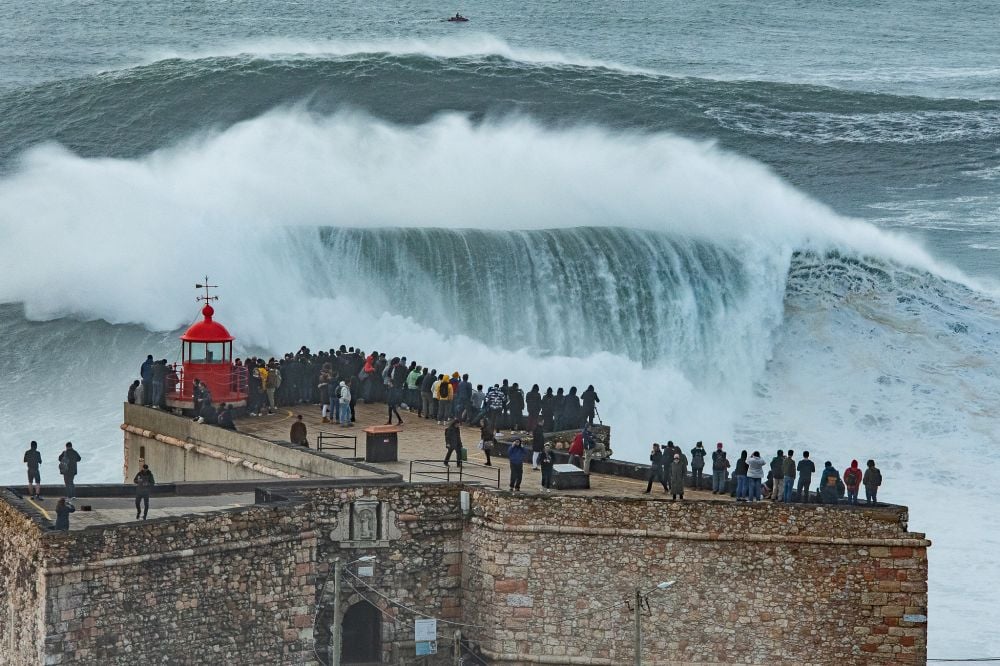 The season for spotting and surfing the big waves in Nazaré (Portugal) is between October and March. The best time for the exceptional waves is in the winter months, from December to February, when the largest swells are most likely to occur in Nazaré.

Is it possible to spot big waves during other months as well? Yes, under certain conditions, it can sometimes happen outside the peak wave season. There have been reports of big waves in Nazaré outside swell season in September and April.

Waves in Nazaré During Summer 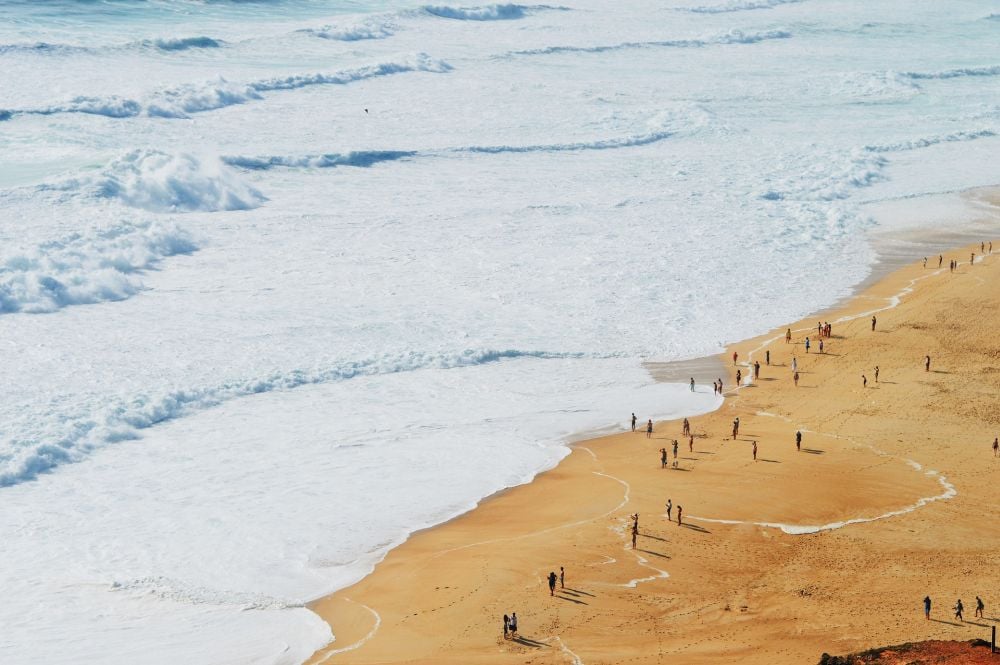 The huge waves do not appear in the summer months between May and August. However, Nazaré also gets perfect but smaller waves during the summer months, and there are plenty of other good waves in the vicinity for, all surfing levels. It’s a beautiful stretch of coastline that has embraced the surf culture.

If you want to paddle around and get a few little runners in warm conditions, summer is a great option.

In Portugal, the highest waves at Nazaré have been measured at 100 feet (30 meters) during unsurfable storm conditions. In the winter months, average waves at Nazare usually reach a height of 43-59 feet (13-18 meters).

The wave is measured by the height of its face. When there is a competition, experts gather to measure the wave in relation to the rider to come out with a wave size. 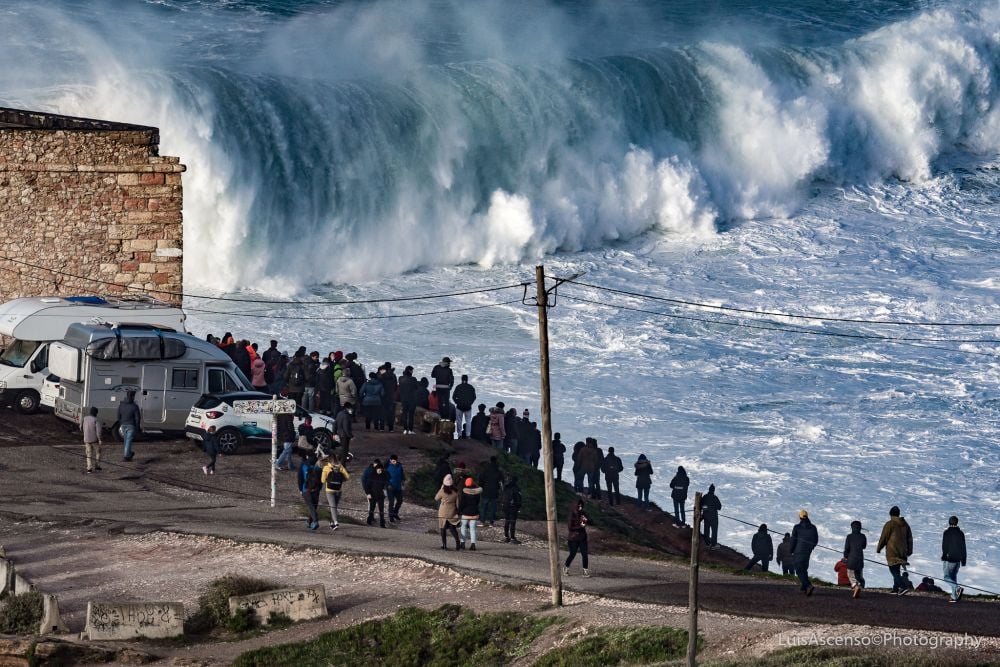 Nazare, Praia do Norte by Luis Ascenso, CC BY 2.0

While many people attribute the giant wave sizes primarily to the undersea canyon, another essential element often gets overlooked. Nazare is mainly a wedge-type wave. When a wave is a wedge-type wave, it is the combination of two wave forces merging.

This causes the wave face to suddenly grow as the two waves combine to make a giant peak. This actual process is what results in the biggest waves in the world being found at Nazare.

However, waves that high have not been surfed yet. But if there was ever a legitimate 100-feet wave surfed, it would be at Nazare.

Who Surfed the Biggest Waves? 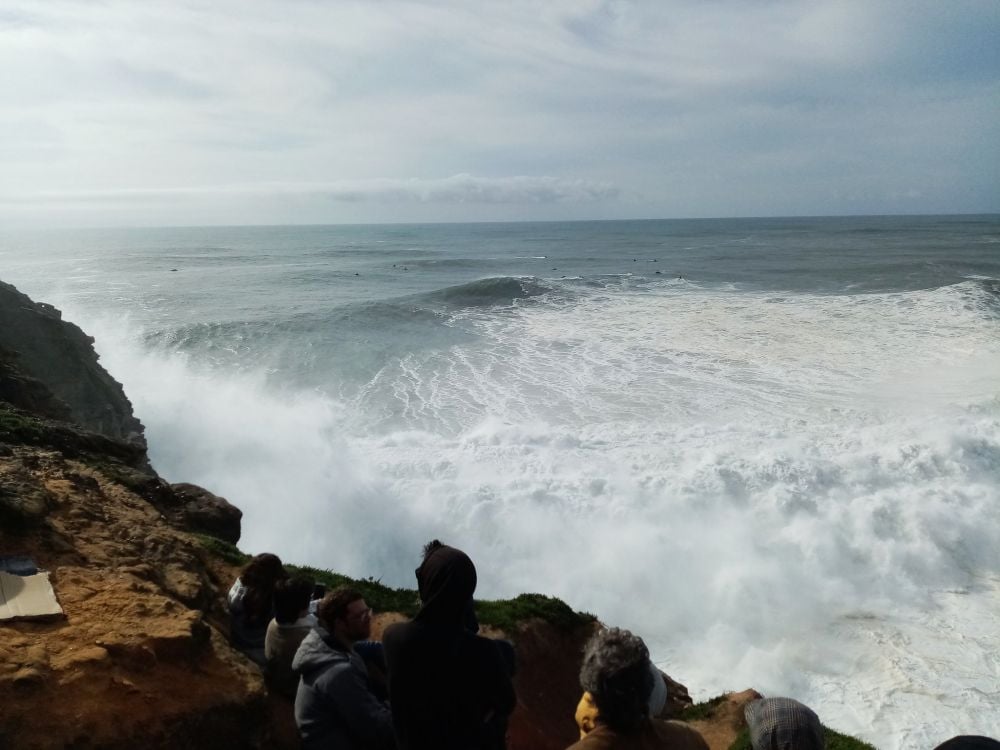 In 2022 the Guinness World Records confirmed that Sebastian Steudtner from Germany broke Koxa’s record. Steudtner surfed an even larger wave than Koxa in October 2020 in Nazaré. He rode on a 86 feet (26.21 meters) wave at that time.

Where these giant waves are found, there is bound to be drama and action. The aforementioned Gabeira suffered a terrible wipeout on a 70-foot wave back in 2013 and was dragged in, not breathing and with a broken ankle. That she was resuscitated was a miracle.

She went on to surf the biggest wave by a woman, which is an incredible achievement.

Andrew Cotton, a surfer from Cornwall in the United Kingdom also suffered a terrible wipeout at Nazare back in 2017, breaking his back in a wipeout on a 60-foot wave that was captured on video and shown around the world.

The hunt for the biggest wave will never be over, and the first person to ride a legitimate 100-footer is still on the hunt. Billabong initiated with their Odyssey Project and the search for the 100-footer, which was to award a prize of $10,000 per foot once the 100-footer had been found. That meant a minimum of a million dollars for the surfer to ride the biggest one.

It is undoubtedly one of the most dangerous and most scary waves to surf in the world. Still, those who ride it successfully are recognized around the world. 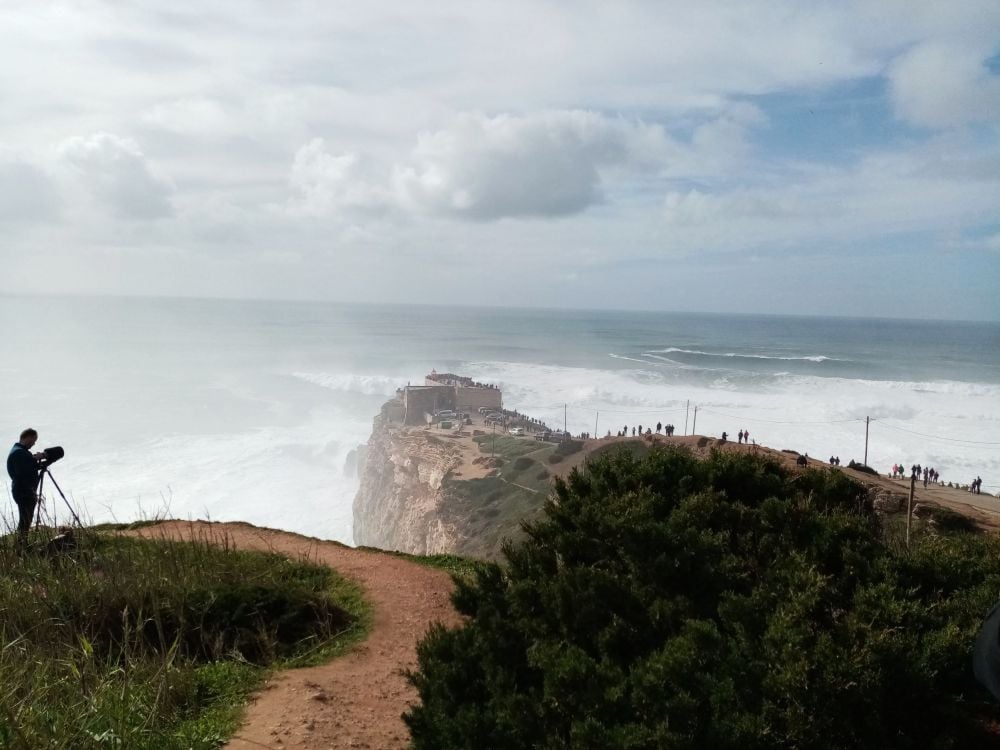 Even during the big waves season between October and March in Nazré, the giant waves are not guaranteed. It’s impossible to promise a massive wave on the day you’re visiting, despite being there in a peak month.

Thus, it’s highly recommended to stay at least a few days in the area (see our accommodation tips below) and monitor the surf forecast report: Praia do Norte – Surf Forecast Report (by windguru).

You have to be flexible combined with a little luck. The wave forecast is reliable only 3-4 days in advance. One week is the maximum prediction time. Beyond that, it’s not trustworthy anymore.

These days, those forecasts are incredibly accurate, and surfers rely on them entirely for any sort of big-wave strike-missions. With any forecast, there is always a chance that a storm could change at any stage. Still, the technology is extremely accurate when it comes to the 72-hour and within range.

Where to See the Big Waves in Nazaré | Viewpoints for Visitors 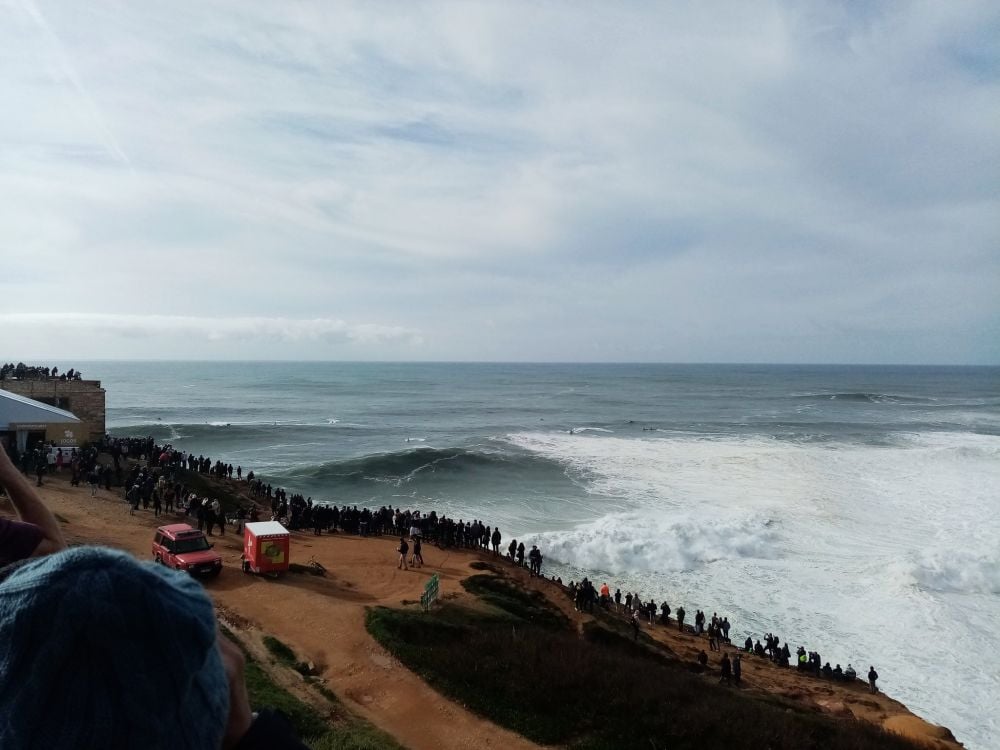 The most famous viewpoint for big waves watching is the red lighthouse located between the north beach and the south beach. You have to pay the small entrance fee of 2 Euros for the museum to watch the surfers directly from the platform. Just punch in ‘Praia do Norte’ into your GPS.

However, the platform can get busy at times, so you should arrive early. Alternatively, we were often lucky and found a less busy spot on the cliffs around it.

Right at the lighthouse, there is only limited free parking available. Therefore, especially on weekends or during events like the WSL Big Wave Challenge, we head for the much bigger parking lot at Praia do Norte during those times.

From there, you can comfortably walk along the beach to the lighthouse and at the same time get a completely different perspective on the spectacle: Meters high, exploding white water!

From Lisbon to Nazaré and Tours

It takes only about 1,5 hours from Lisbon to Nazaré. You can either drive or take a bus. Taking the bus is the cheapest option as ticket prices are only 11-14 EUR (one way).

However, if you only want to visit Nazaré and are not planning to stay there, we recommend a day tour (see the banner above), which includes:

Where to Stay | Hotel Deals

Even if you’re only remotely interested in surfing, then please check out this book. It’s not only a book. It’s a 15 pounds surf bible printed on real heavy paper. A storage box is included. This one will last centuries. Check it on Amazon via clicking on the link above or here: Surfing: 1778-Today (English)  [Amazon affiliate link]

Why the Waves Are So Big at Nazaré | Geology 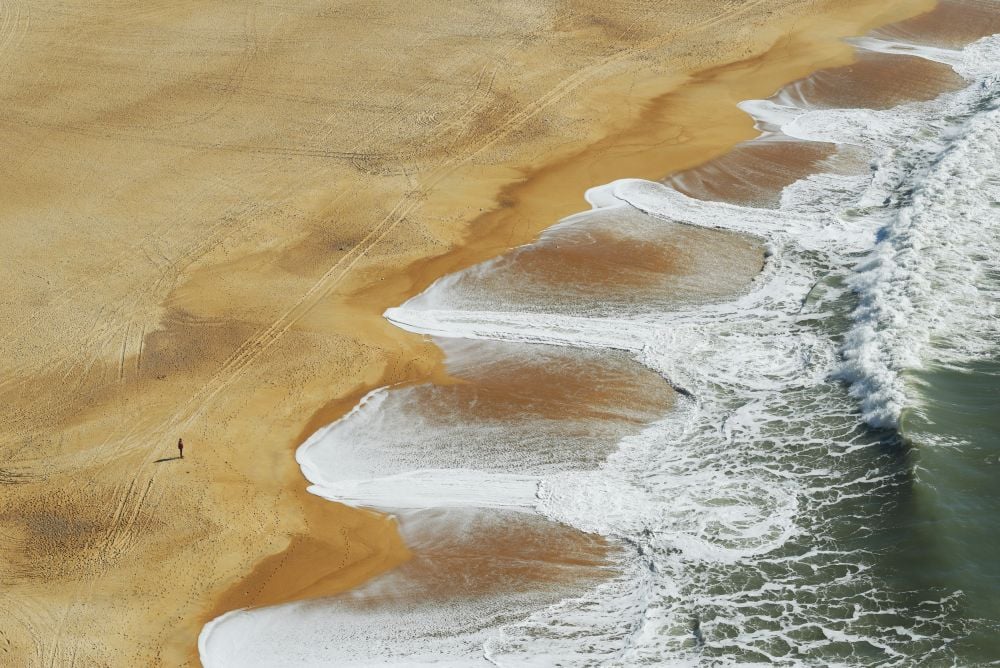 The unique offshore marine geology and a set of specific weather conditions answer why waves of such a great height are generated here. Thus, the three reasons for such big waves at Nazaré are:

A large part of the waves’ occurrence is due to a colossal submarine canyon located underneath the sea, just to the west of the seaside town. Starting at around 1 km (0.6 miles) off from the shore and extending westwards for approximately 210 km (130 miles), this vast undersea chasm – the largest in Europe – reaches depths of more than 4,000 meters (13,000 feet).

The ‘Nazaré Canyon’ cuts into the continental shelf, in very much the same way that the Grand Canyon has eroded downwards into the Colorado Plateau, but underwater. The Nazaré Canyon presence enables large ocean waves to reach the shore whilst having little of their energy dissipated.

Usually, when large waves that have traveled across the ocean reach the continental shelf, the presence of shallow water removes a significant amount of energy from them, resulting in waves that are much lower and smaller than they are at Nazaré.

In contrast, the Nazaré Canyon’s existence means that the sea close to the coastline is relatively deep, allowing the waves to arrive at the coast with little energy dissipated.

The second ingredient which is required to power the enormous waves are strong westerly winds from the mid-Atlantic. The prevailing wind direction in this part of the world is from the west, north-west, or south-west.

When a swell arrives and moves over the canyon, the abrupt changes in sea depth reduce the waves’ length and increase their height, after which they are blown by the wind towards the shore.

The winds also explain why waves of such a big height often only occur between the months of October and March (with occasional occurrences in September and April): The Azores High moves up from the southern mid-Atlantic towards Europe during the summer months. They block any Atlantic depressions – and strong westerly winds – from reaching Portugal.

The third factor is a local water current, which flows close to the coastline in a southerly direction. The current increases the wave height even further. It changes in the direction around the Nazaré area, flowing towards the southwest – the general direction that the waves flow from – driving water towards the incoming waves.