The best time to visit Emerald Bay State Park is from May to October. These months offer pleasant enough temperatures for most visitors. A great time for stunning waterfalls is May and June after a wet winter.

However, the park is an excellent year-round destination. Please read our weather guide below with details for each season and month and the lookout section at the end of this article. If you plan do visit Southern California as well, take a look at our San Diego Season Guide. 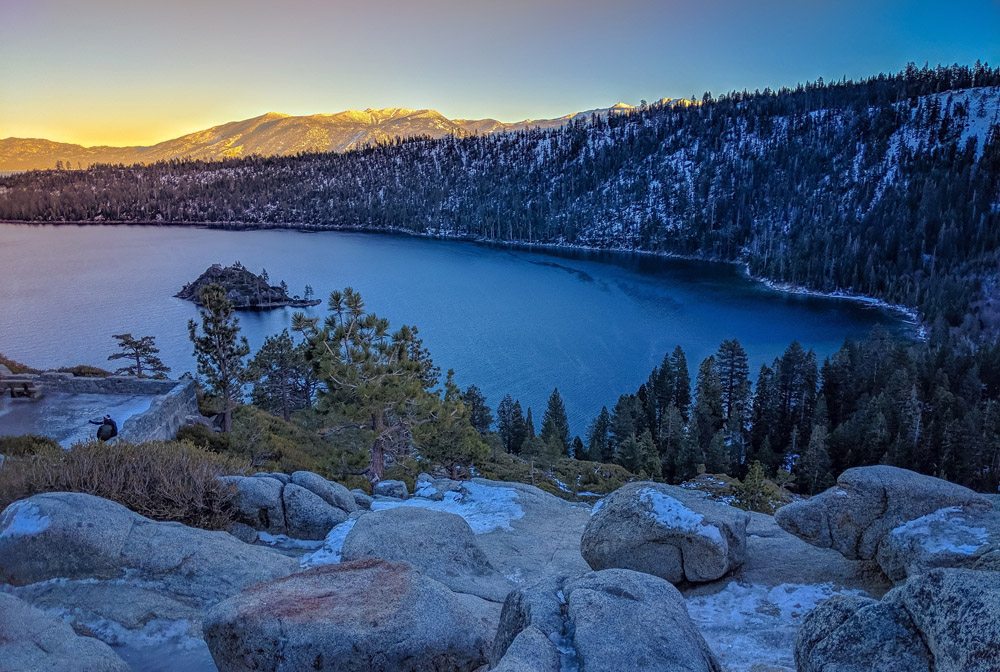 Emerald Bay State Park in California is a place where the climate is as varied as the landscape, with pleasant springtimes, hot summers, and icy winters. The spring months are renowned for their impressive sunsets, and although the temperatures are usually pleasant, early mornings tend to be cold with a touch of frost. Clear days are always possible in spring.

The chances of experiencing sunny weather increase greatly during the summer. The summer season is also much warmer, with the air being at its driest and the temperatures climbing above 25ºC (77ºF). On top of this, rainfall is very low. 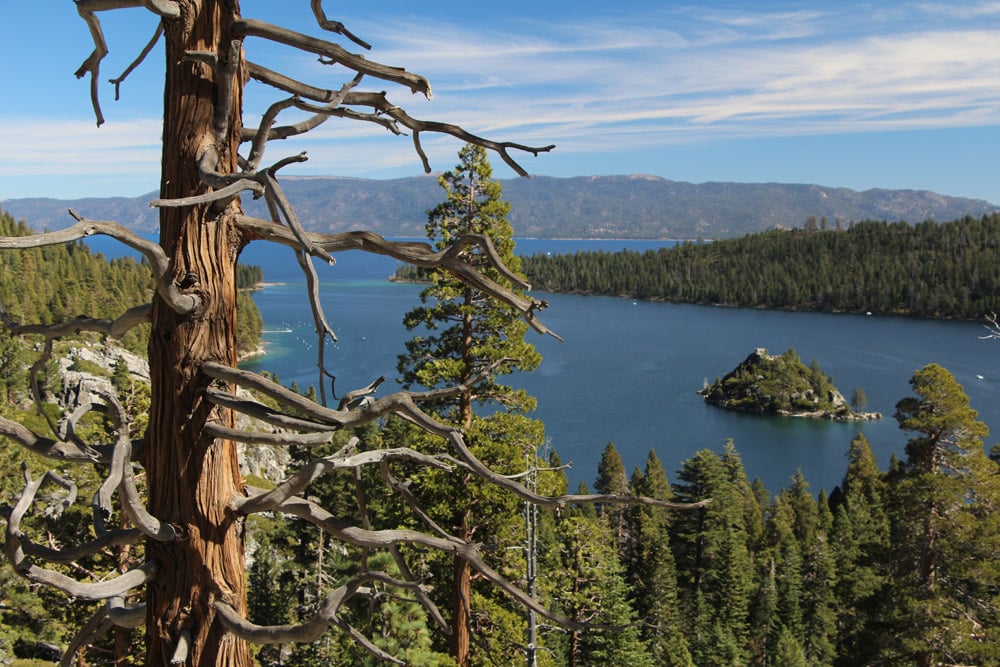 As summer turns to autumn, Emerald Bay State Park becomes awash with golden colors as the trees begin to die back for the winter. This makes for incredible views, and the weather remains good, with comfortable temperatures and low rainfall.

The later fall months can bring colder weather, with the possibility of snowfall increasing as the season changes to winter. In line with this, the temperatures drop – often falling below freezing – and sunny days become less common. With the lake sometimes freezing over and snow on the ground, winter is another season of spectacular scenery. 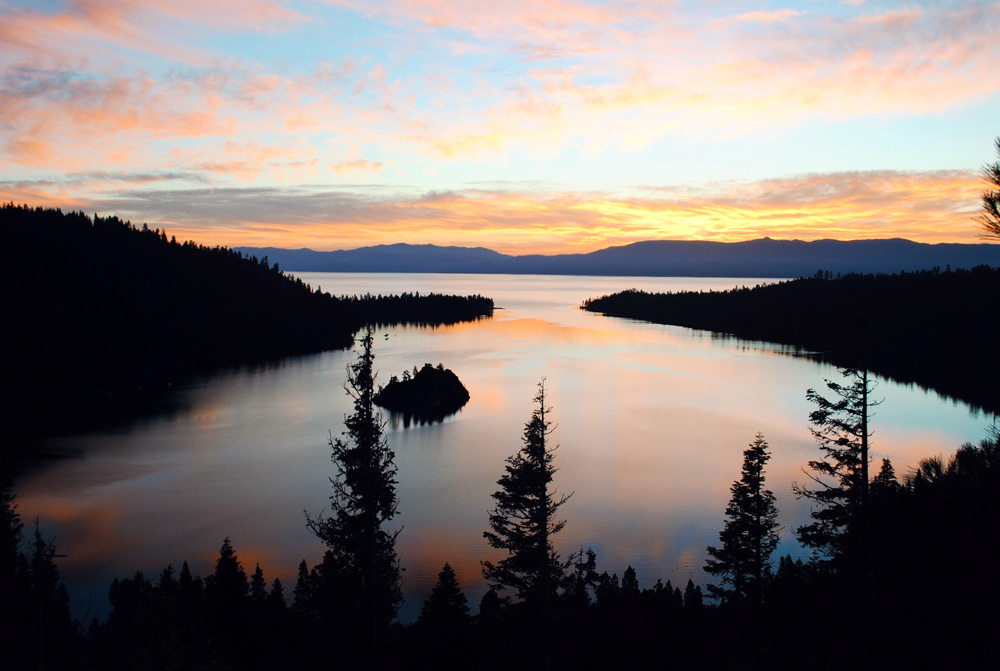 January in Emerald Bay State Park is a wintry month, with average highs of 6ºC (43ºF) and lows of -4ºC (25ºF). The weather is generally cloudy and snowfall is common. It’s essential to dress in suitable clothing, with warm layers.

During February, the park is at its wettest, with a 33% chance of precipitation on any particular day. Rain often falls as sleet or snow, as the temperatures remain low. The average high is 7ºC (45ºF) and the average low is -3ºC (27ºF).

In March, Emerald Bay State Park’s weather begins to warm as spring approaches, although it remains a cold month. The average high is 10ºC (50ºF) and the average low is -2ºC (28ºF). This month tends to be the cloudiest and windiest time of year.

In Emerald Bay State Park, April is generally the last month in which there is any significant snowfall, with around a 5% daily chance of this weather type. The average temperature high is 12ºC (54ºF), and the average low is 0ºC (32ºF), making it a chilly time of year.

During May, the area usually receives the first warm days of the year, with average highs of 17ºC (63ºF) and average lows of 3ºC (37ºF). Sunny weather becomes a more regular occurrence, and precipitation levels drop.

In June, Emerald Bay State Park’s weather is very comfortable, with warm days and generally clear skies. Due to this, the air can start to become quite dry, and so you should come prepared with plenty of water. The average high is 23ºC (73ºF) and the average low is 7ºC (45ºF),

July in Emerald Bay is often the hottest time of year, with average highs of 27ºC (80ºF) and average lows of 10ºC (50ºF). Alongside this, sunny days are common, and there is only a very small daily chance of precipitation, at 3%.

During August, the bay retains its favorable weather conditions, with long days blessed by warm temperatures. This is also the year’s driest month, with the average temperature high being 26ºC (79ºF) and the average low being 10ºC (50ºF).

In September, the temperatures in Emerald Bay State Park begin to dip slightly in comparison to the summer months. The average high is 23ºC (73ºF), and the average low is 8ºC (46ºF), with there still being a high number of sunny days.

October in Emerald Bay can be a time of cold mornings and warm afternoons, with precipitation levels increasing when compared to previous months. The average temperature high is 17ºC (63ºF) and the average low is 3ºC (37ºF).

During November, the park starts to turn cold again as winter sets in. Snowfall is a possibility during this month, with average highs of 10ºC (50ºF) and average lows of -1ºC (30ºF). The daily chance of experiencing a sunny day drops to below 30%.

Set amongst high granite hills and rich woodland, Emerald Bay is a beautiful remnant of California’s glacial past and forms a small inlet in Lake Tahoe’s southwest corner. People come from all over the world to take in the scenery in Emerald Bay State Park. 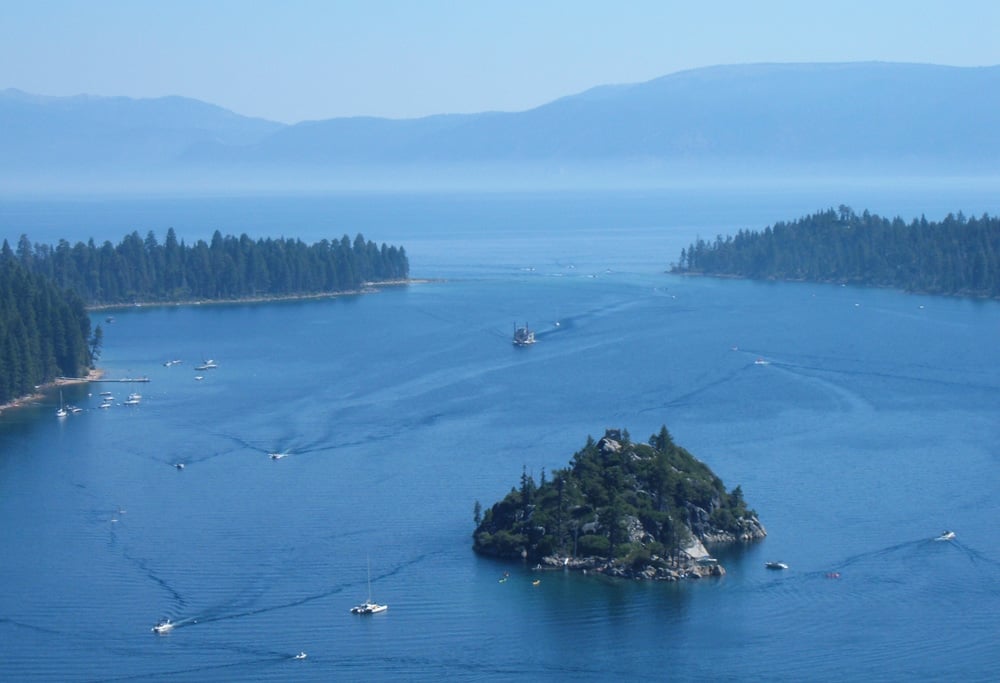 You can enjoy the best views in Emerald Bay State Park from the lookout point at the western end of the bay. Located just off Highway 89, it provides a perfect vantage point over the lake and is very popular amongst visitors.

The view overlooks tall pine trees, with the lake’s shimmering blue waters below being framed by the distant hills on the other side of the bay. It can be a great photo opportunity, although it’s a good idea to be aware of the times when the lookout becomes busy. Parking spaces can often fill up on weekends, especially during the summer months. It is much easier to find a place to park during winter. For the best experiences, consider visiting on a weekday morning when the area is at its quietest.