March is a grand time to visit Houston, Texas’s largest city. With cold, icy winters and hot, muggy summers, the shoulder season months of spring and fall are best for visitors looking to see Houston. In particular, the wildflowers, such as the state flower bluebonnets, and the migrating birds, make March a must-visit month.

We’ve created this Houston guide to help you know what to wear, what to do, and the best places for a visit in March. 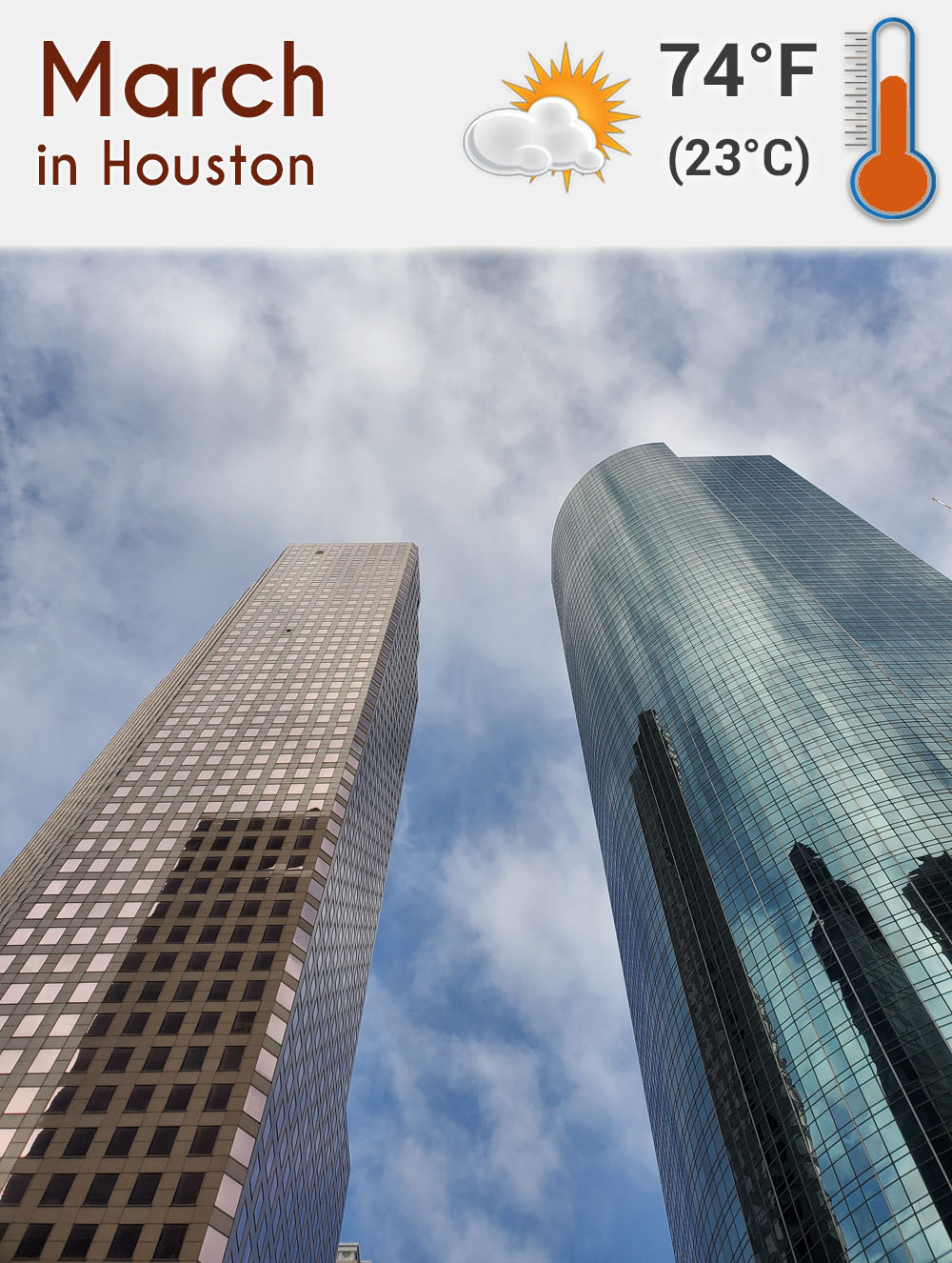 Temperatures are typically mild and pleasant during March in Houston. Though you may receive spring showers, you’re also likely to experience many clear, sunny days too.

March in Houston is warm and as steady as it gets. Daytime temperatures typically reach mid-70 F° degrees (24°C), with the occasional day at 80 F° (27°C) degrees or more. Evening and morning temperatures are in the mid-50 F° (13°C) degrees. Most days in March are very pleasant but cloudy or partly cloudy, with about a 25% chance of rain.

Weather Summary: It is comfortable and warm in March with slight temperature variations throughout the month.

Sunshine/Clouds: About half of the days are overcast. At the beginning of the month, Houston’s skies will be clear and sunny over 50% of the time, and by the end of the month, it will be 60%.

Rain and Humidity: There is an average of 26 to 23% chance of rain from the beginning to the end of the month. And humidity gradually increases from 12% at the beginning of March to 25% by the end of March. That means you may experience the city’s famous humidity in late March, which is also when you’ll see the largest crowds.

Weather Patterns: However, weather in Texas is highly variable, and there are reasons for this.

First, there are often two competing weather fronts in Central and South Texas: the cold, dry Arctic air that pushes down from Canada and the warm, humid Gulf of Mexico jet stream pushing north from the Caribbean. In early March, days are often cloudy or foggy. The air may be humid by late March.

There has been more rain recently than usual, with March 2020 and 2021 among the state’s wettest on record, though this is generally a 25% chance of precipitation. Our clothing guide below addresses what you’ll need to bring for spring in Texas. 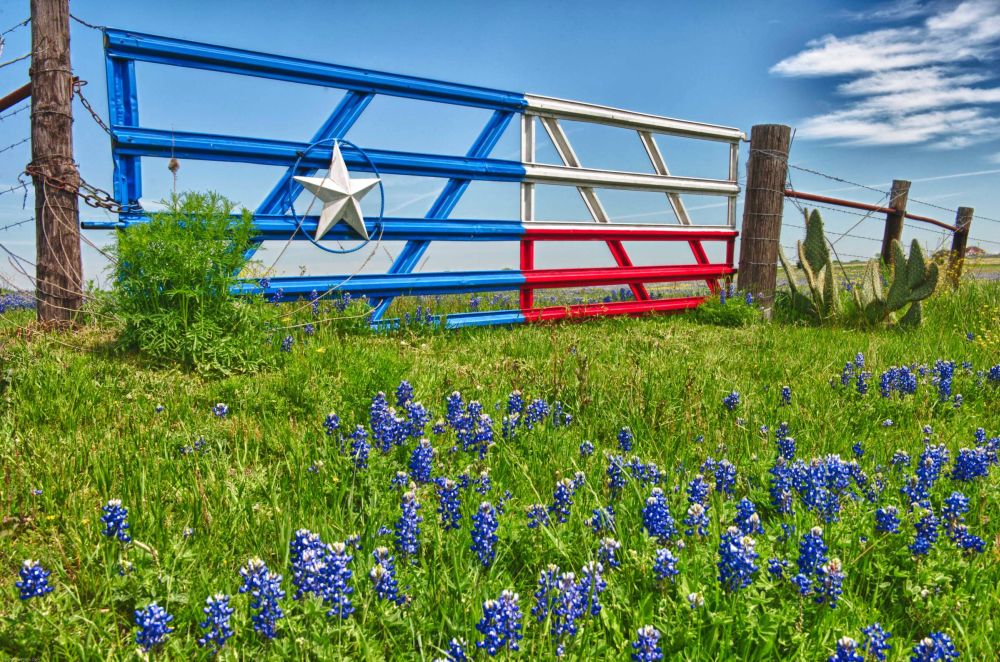 By the end of the month, you’ll see fields of wildflowers everywhere: patches of bright blue, red, and yellow. The beaches are calm, the bluebonnets bloom, and birds sing everywhere. If this is your first time visiting Houston, there’s a strong chance you will fall in love with the springtime in South Texas. 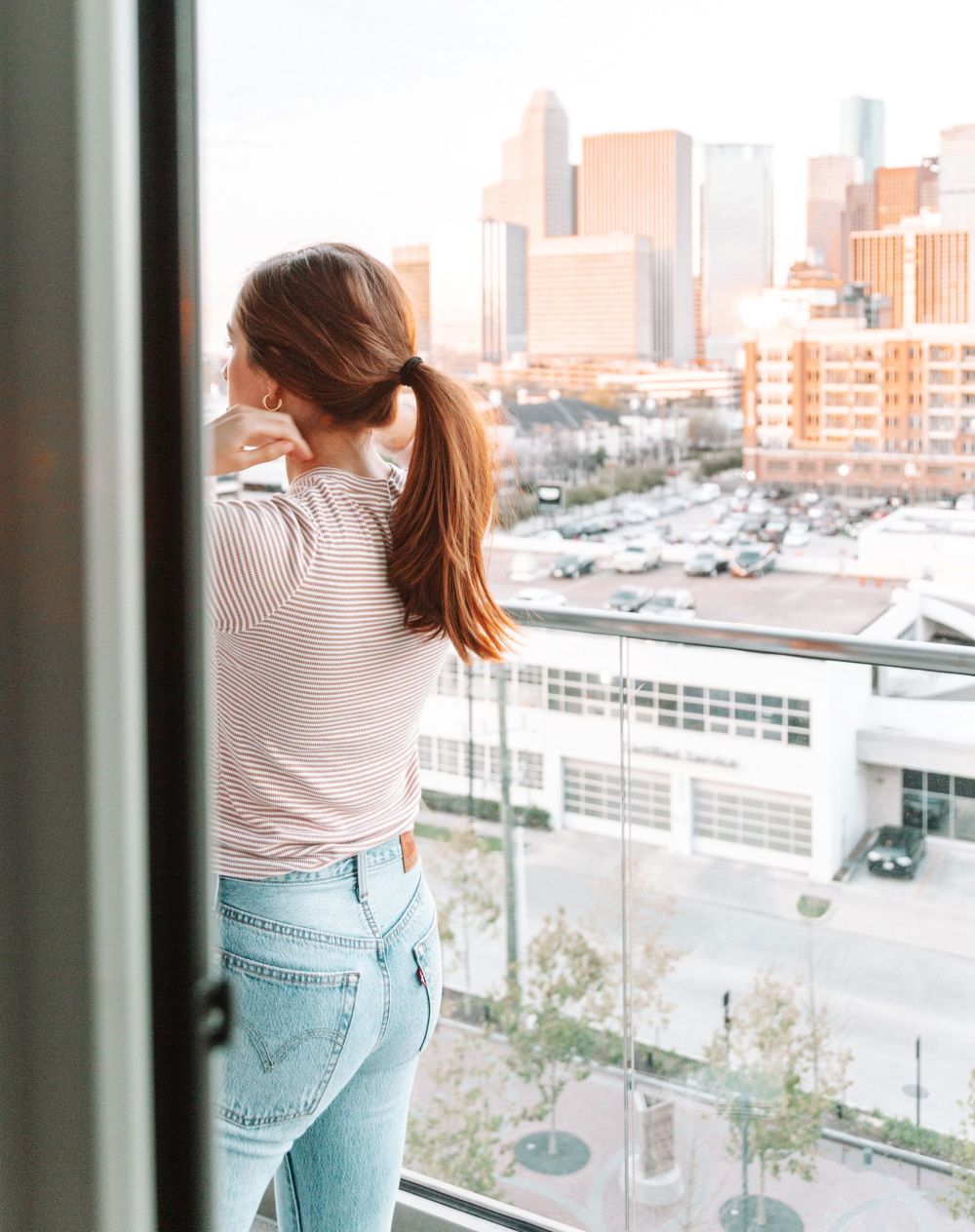 Houston is a notoriously warm and humid city, and even though March is cooler and drier, you’ll want to wear light, breathable fabric that dries quickly, like merino wool, nylon, or cotton blends. There can be sudden changes in weather, such as a short thunderstorm, so you’ll also need to prepare for wet weather. In summary, we recommend the following clothing:

Finally, fashion in Texas is more casual than in other states, but if you want to dress up a look, you may buy a pair of leather cowboy boots. At formal occasions like weddings in Texas, you’ll see people wearing their best boots.

March is the shoulder season for tourism in Texas, one of the best months of the year to visit. If you prefer fewer tourists, travel in early to mid-March. Peak spring break crowds visit Houston and surrounding cities like Galveston and South Padre Island in the last two weeks of March. These last two weeks are the best for sunny weather, but you’ll pay more for hotels and will encounter many young students partying on the beach. However, if you’re eager to join in a party, you’ll rarely see Coastal Texas as vibrant.

8 Must-See Events and Things to Do in March 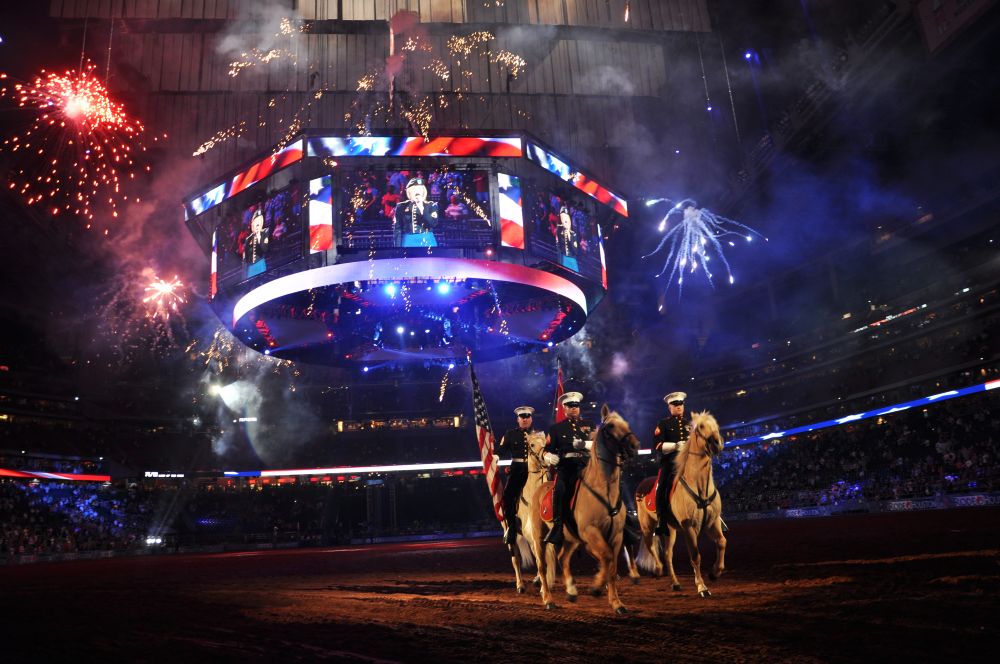 Houston is a vibrant city, and you’ll find many things to do in March. Some event highlights include Rodeo Houston and Houston Holi. Nature takes center stage with wildflowers and peak birding season, both of which you can experience at Brazos Bend State Park. And, of course, you’ll love talking with an astronaut at Houston’s most-visited site, Space Center Houston.

Breakfast with an Astronaut (Saturdays)

If you’ve ever wanted to ask an astronaut what life is like in space, this is your event. Attend an 8:30 a.m. breakfast catered by Wolfgang Puck at Space Center Houston, the city’s top attraction, every Saturday of the year. Tickets cost $79-$99 per person and include admission to Space Center Houston. For a more affordable astronaut experience, attend Astronaut Mission Memories, a 30-minute talk with an astronaut every Friday and Saturday (included in admission price). Read more about astronaut experiences here.

Nobody throws a rodeo quite like Houstonians (sorry, Dallas). Rodeo Houston is the largest rodeo in the state, and in 2022, it will turn 90 years old. Enjoy events like horse shows, rodeo competitions, carnival attractions, live concerts, and more with millions of other visitors. Read more at RodeoHouston.com.

(February 18 to March 1, 2022): Although Mardi Gras happens in February, the country’s third-largest Mardi Gras festival wraps up on March 1, which means you can still celebrate in Galveston, 50 miles south of Houston. Enjoy celebrating this festival with parades, food, and even a 5k fun run. Save room in your bags for all the beads you’ll bring home. Read more at MardiGrasGalveston.com.

(March 12, 2022): H-Town loves a good party, so it’s no surprise they do St. Patrick’s Day in style. In 2022, the best day to experience this will be Saturday, March 12, when there will be a free, two-hour street parade followed by an Irish stew cook-off and after-party that will undoubtedly last all night. Read more at HSPPC.org.

Houston Holi, the Festival of Colors

(March 26, 2022): Celebrate the Hindu festival Holi in Houston, one of the most populated communities of Indian immigrants. You’ll enjoy bright colors, live music, a bonfire, foam party, and excellent food at this ticketed, outdoor festival. Read more about the festival at HoustonHoli.com.

(March 26-27, 2022): If you’re into celebrating all things Texan and you missed Rodeo Houston, your best choice is Texas Fest, a free event in Conroe, 40 miles north of Houston. Visitors can enjoy open-air concerts, a car show, a frisbee dog show, and try local craft beers. If you’re in Houston this weekend, rent a car and come on up to Conroe for a quintessential Texan festival. Read more at TexasFestHouston.com.

(typically late March): Bluebonnets are the state flower of Texas and bloom from mid to late March. You can see these flowers all over the state, but in Houston, you may visit Memorial Park, the largest public park in the city. Read more about Memorial Park at MemorialParkConservancy.org.

(all month): There are few states as perfect for birding as Texas. Brazos Bend State Park is about 45 miles outside Houston and is a must-see for birders. Brazos Bend is home to over 300 species and nearly 30 million birds each year. Some of the incredible birds you’ll see migrating across Texas include the red-shouldered hawk, barred owl, hooded warbler, and so many others. It’s best to visit the park and take a guided birding hike. Read more about birds in Brazos Bend State Park at BirdWatchersDigest.com.

Galveston is much cloudier and mild than Houston in March. Temperatures during the day may only reach 70 F° degrees, and evenings and mornings are around 60 F° degrees. March is almost always cloudy in Galveston, though there is less chance of rain than in Houston. Spring break crowds are decidedly less raucous in Galveston than they are in South Padre Island, but you’ll find that the city and beaches are packed during the last two weeks of March.

South Padre Island is a central spot for spring breakers due to its heat and lack of rain (about 11% chance). However, it is still humid and cloudy during March in South Padre Island. Daytime temperatures often reach as high as upper 70 F° degrees, with evenings and mornings in the mid-60 F° degrees. By the end of March, the humidity in South Padre Island can be a staggering 57%, which is more than twice as much as Houston. If you’re there in the last two weeks of March, you’ll find a city that caters to its young tourists from around the country looking for a place to party on the beach.