Lake Tahoe is one of the most magical sights in North America, the largest alpine lake in the U.S. with crystal clear waters. Though the region has experienced tragedy as recently as the Caldor Fire in Fall 2021, Lake Tahoe and its cities and ski resorts, are still worth a springtime visit.

We’ve created this guide to help you know which Tahoe ski resorts to visit in April, the closing dates for ski season, the weather in April, what to wear during your April visit to Lake Tahoe, and if it’s a good month for hiking. 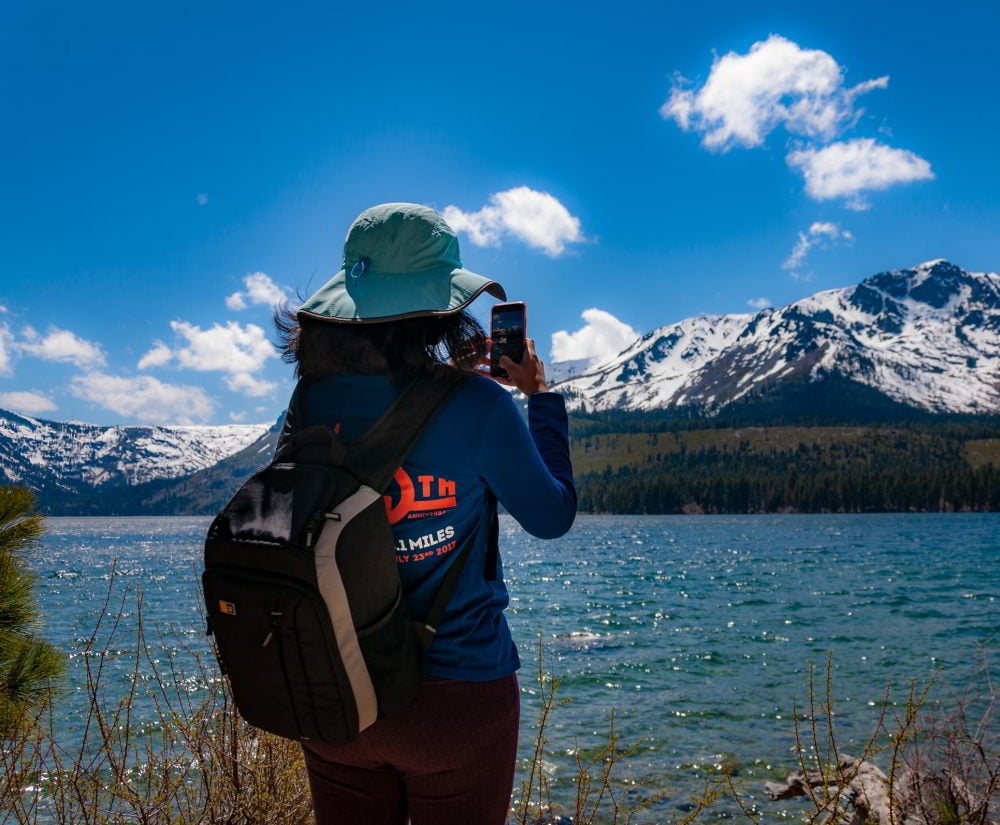 If you’re not into Tahoe’s snow sports (scroll down for our full ski resort April guide), we got you covered:

April is an excellent time to go hiking at lower elevations at Lake Tahoe where the snow is melting or gone. For this, we recommend hiking boots and – for the icy or snowy sections – microspikes and trekking poles.

In South Lake Tahoe, an easy hike is the Lam Watah Nature Trail which takes you to Nevada Beach (2.8-mile loop). For more of a challenge, head to Emerald Lake State Park and hike there, such as this popular waterfall hike, Cascade Falls Hike (1.4-mile out and back),

If you’re in Incline Village, you’ll love the Stateline Lookout trail, an easy 1.7-mile path that crosses the Nevada-California border and overlooks the northern edge of the lake. And for a more challenging hike just south of Incline Village, trek up to “Monkey Rock” on this 2.6-mile out and back trail for exceptional lake views.

Is There Snow in April? 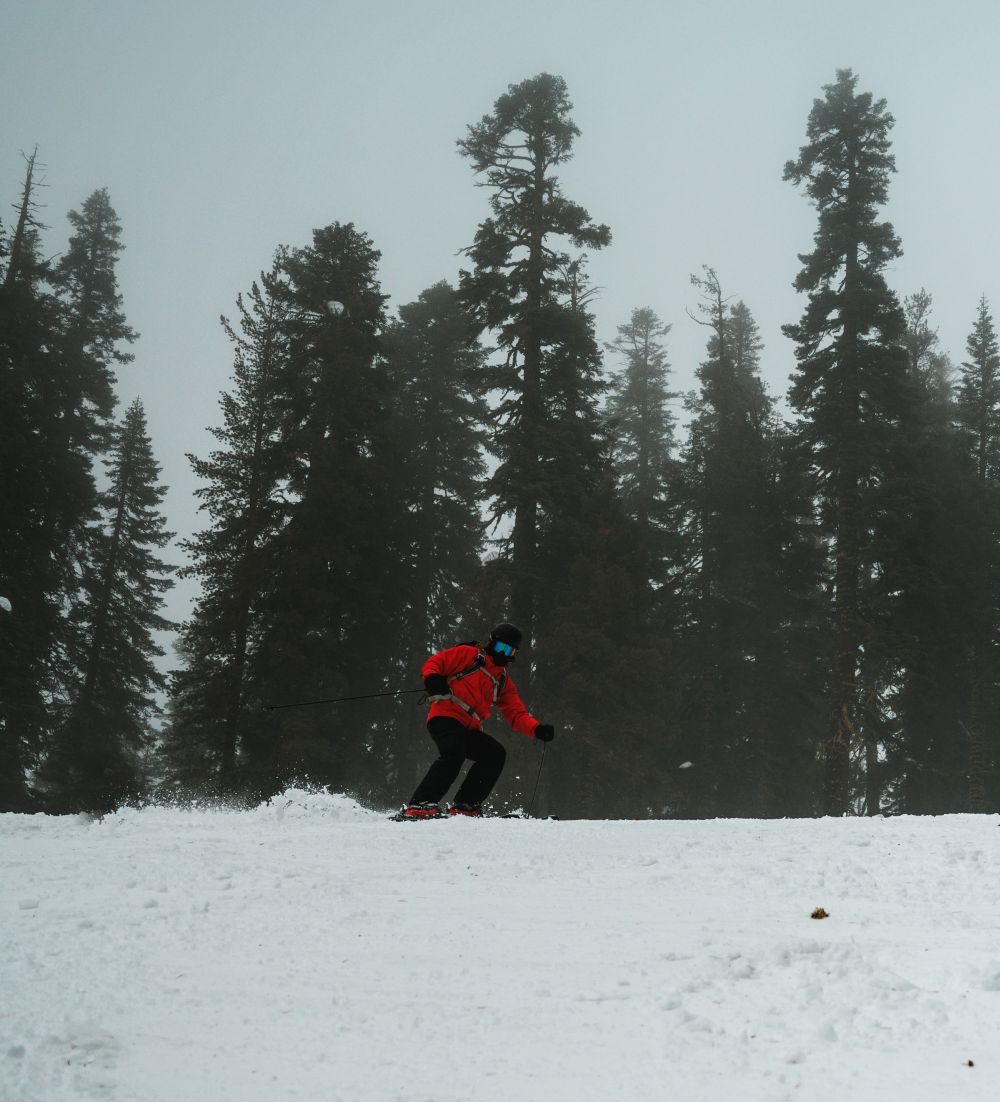 There is still enough snow in Lake Tahoe in April at multiple ski resorts. While some Lake Tahoe mountain resorts close in March or April, many offer skiing and snowboarding opportunities until May with sometimes up to 10 inches of snow. 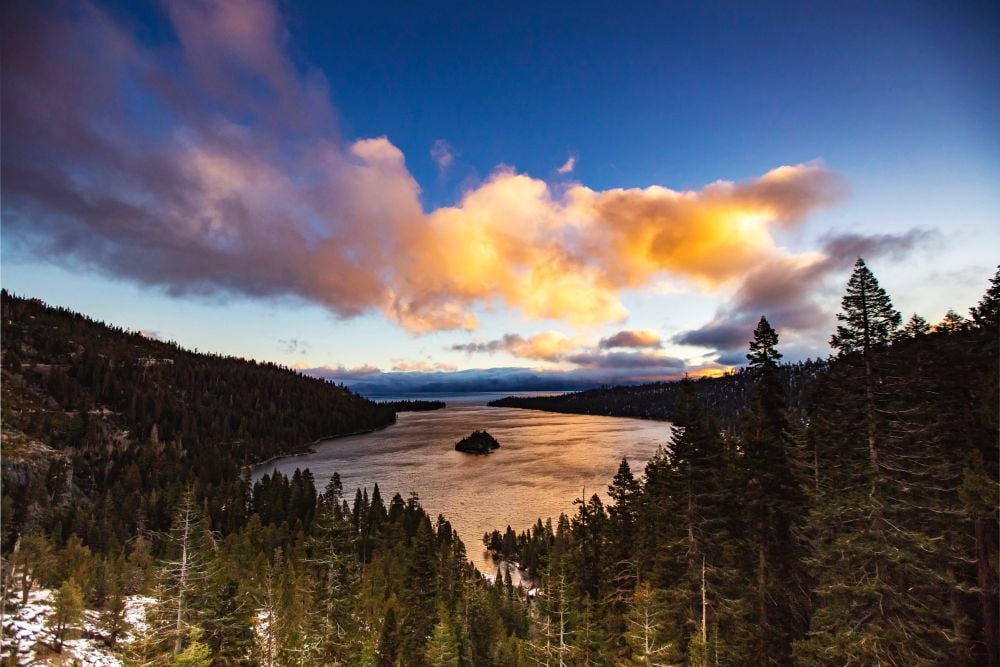 April marks the end of the ski season in Lake Tahoe’s many communities, including the cities of South Lake Tahoe (California), Incline Village (Nevada), and Tahoe City (California).

However, if you walked the snow-covered edges of the lake on a brisk April morning, you may ask yourself: What shoulder season? If you plan to ski, snowboard, or snowshoe in April, particularly early April, you’ll still find several places that can fulfill your winter dreams.

Because April is a changing season, we’ll cover early-month, mid-month, and late-month weather in the Lake Tahoe region.

April in Lake Tahoe typically offers great weather for skiing at higher elevations and suitable conditions for hiking or other outdoor activities at lake level. The average high temperatures range from 50°F to 58°F degrees with up to 10 inches of snowfall.

At the beginning of April, daily high temperatures are in the low 50 F° degrees, with evening and morning temperatures in the low 20 F° degrees. Historically, there have been 5-8 inches of snow in the first few days of April, with the most snow falling in the Truckee and Tahoe City area. Skies will be cloudy half of the time, though there is only a 20% chance of precipitation.

In the middle of April, daily high temperatures reach the mid-50 F° degrees, while evenings and mornings are in the upper 20 F° degrees. You can expect 3-6 inches of snow in mid-April and about an 18% chance of precipitation. Skies will still be cloudy half of the time, though they are beginning to clear.

By the end of the month, daily highs rise to the upper 50 F° degrees, with evenings hovering around freezing. Late April brings 2-4 inches of snow and mostly clear skies, with only a 15% chance of precipitation. The end of the month is an enjoyable time to experience the springtime in Tahoe.

We loved this helicopter flight. You will experience the breathtaking scenery of Emerald Bay, Fallen Leaf Lake, and Cascade Lake. Quote from a visitor: ‘Such an incredible flight. Our pilot Matt was super knowledgeable and overall great company! A fantastic experience!!’

5 Resorts near Lake Tahoe for Skiing in April

The Lake Tahoe region has multiple mountain resorts. However, most of them close in March or April. We’ve included eight resorts below that will offer you skiing or snowboarding opportunities throughout April.

Palisades Tahoe and Heavenly resorts are typically open all month, while other resorts listed below may close earlier in the month. As the ski season depends on winter snowfall, it’s best to review the websites and social media of these resorts in late January and February, when announcements about season extensions are made.

April Snow Conditions: Basically, icy in the morning, slushier during the day as the sun comes up.

The largest ski resort in California, Palisades Tahoe is formerly known and still colloquially referred to as “Sq**w” Valley, an offensive term for Native women. It is the largest ski resort in California, known for its advanced routes. Located outside Tahoe City on the northwest section of the lake, Palisades often has the longest-running ski season, likely due to this area’s heavy snowfall. You may see as much as 10 inches of snowfall in early April.

As a result, the Palisades Tahoe’s winter season “typically runs from November to May.” As of early January 2022, we could still book lessons as late as May 1, 2022. Palisades Tahoe is a 3 to 3.5-hour drive from San Francisco and less than an hour from Reno. Read more about the resort on PalisadesTahoe.com or their Facebook page.

On the northeast corner of the lake in Incline Village, Nevada, is Diamond Peak Resort. The area is colder, drier, and has clearer skies than other Tahoe communities, so this is your resort for bluebird days on the snow. We could book a lesson as late as April 22, a week or two later than most ski resorts.

In addition, this is an excellent location for visitors who also enjoy frequenting casinos (gambling is legal in Nevada but not California). Diamond Peak Resort is a 45-minute drive from Reno and a 3.5-hour drive from San Francisco. Read more about the resort on DiamondPeak.com or their Facebook page.

Heavenly is located outside South Lake Tahoe, on the southeast side of the lake near the Nevada border. The resort is a 3.5-hour drive from San Francisco and only one hour south of Reno. In April, the area around the resort may receive anywhere from one to seven inches of snow. The resort website states that the best time to visit is “January through March,” we could book a ski lesson as late as April 17, 2022.

However, on a good snow year in February, the resort has historically extended its season by a couple of weeks. Heavenly is an excellent location if you want to be centrally located and within walking or commuting distance of restaurants, bars, and casinos (Nevada is next door). Read more about the resort on SkiHeavenly.com or visit their Facebook page.

On the lake’s northwest side, Northstar California Resort boasts heavy snowfall throughout the winter. The surrounding Olympic Valley receives between 2-10 inches of snow each April on average, making this a compelling location for a late-winter visit. Northstar is a luxury, family-friendly resort. The resort is a 3 to 3.5-hour drive from San Francisco and only 40 minutes from Reno. The last day we could book a ski lesson was April 17, 2022. Read more about the resort on NorthstarCalifornia.com or their Facebook page.

Next door to Northstar is the smaller Sugar Bowl Resort. This resort is strategically located in one of the snowiest regions near Tahoe Lake, receiving up to 10 inches of snow each April. Sugar Bowl is one of the oldest resorts in the country and offers Nordic skiing trails, among other attractions. It is known for short lines and smaller crowds. The resort is a 3 to 3.5-hour drive from San Francisco and 40 minutes from Reno.

However, like many resorts, this one closes in early April. The last day we could book a lesson was April 10, 2022, though this may be extended depending on the snowfall this year. Read more about the resort on SugarBowl.com or visit their Facebook page.

What to Wear in Lake Tahoe 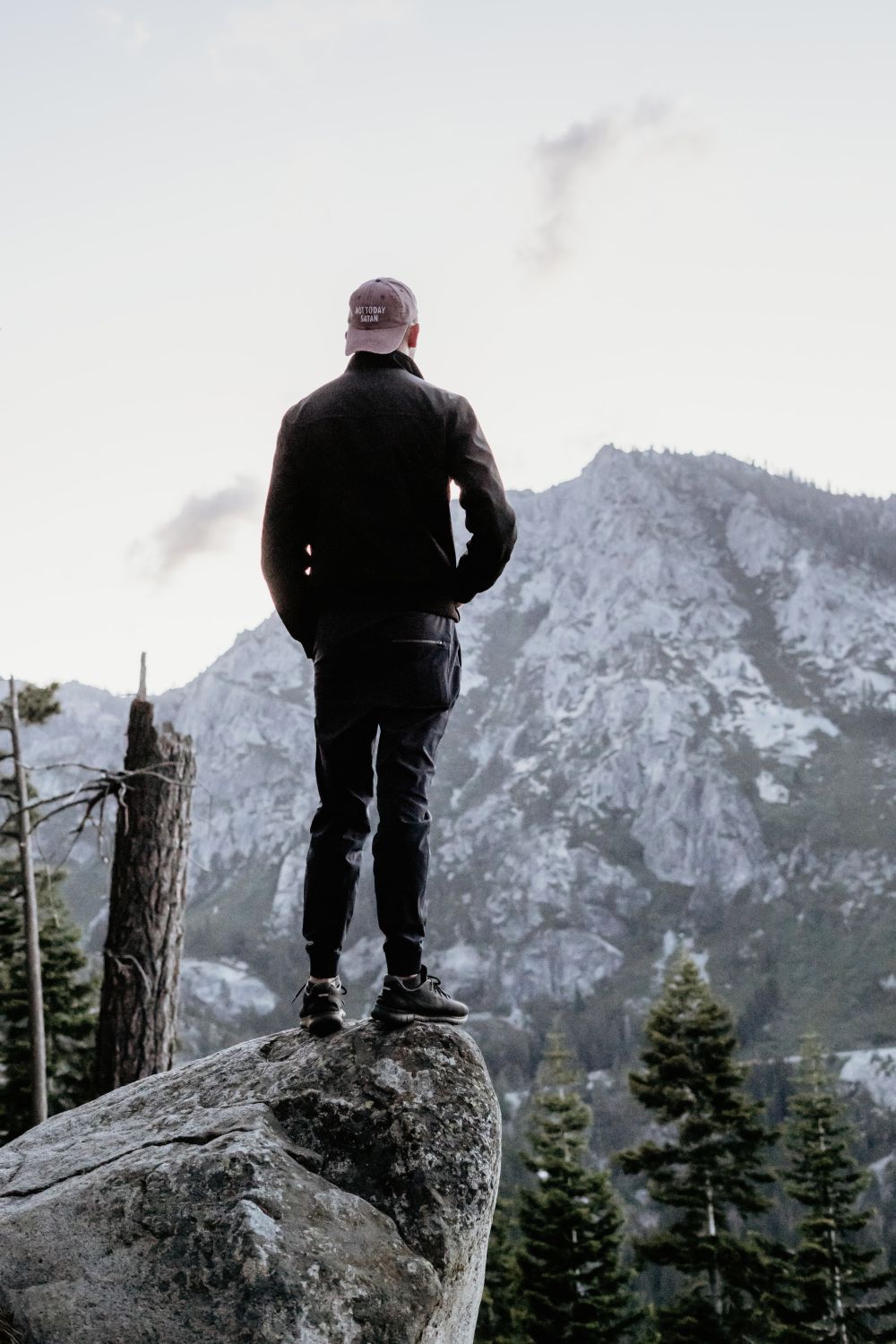 Lake Tahoe is a place to wear your layers in April’s cold, dry weather. You’ll need shoes with a firm grip, like hiking boots or snow boots. We also recommend the following clothing layers:

You may also experience rain or snow, so you may want to bring a heavy-duty waterproof jacket. And always bring multiple layers of dry, warm clothing if you get your clothes wet.

April is a tricky time to visit Lake Tahoe if you plan to visit a ski resort, as most close around mid-April. However, this is also the best time to visit as days are warmer and brighter, with fewer crowds on the slopes. The three largest cities around the lake are listed below, and the best times to see them in April.

Every year, 15 million tourists visit South Lake Tahoe, the most populated city in the region, with over 21,000 residents. However, the months with the least number of rooms booked are April, May, and November.

So if you’re visiting in April, you’ll have more choices of hotel rooms, and mid to late April will be the least crowded times to visit. However, if you’re visiting as a snow tourist, note that most resorts close for the season after mid-April.

The best time to visit this city would be in early or mid-April, as you’ll experience emptier slopes and more accommodation choices. Hotel costs range from $60 to $1,000 per night. The weather is also warming up with mild temperatures from 51°F to 58°F degrees.

With fewer locals and visitors, Truckee and Tahoe City are great places for visitors who want to avoid crowds. Tahoe City has just over 1,500 residents, while Truckee has over 16,000, and their tourism numbers are lower than those in South Lake Tahoe.

With more snow on this side of the lake, some resorts like Palisades Tahoe can stay open for longer in the season. You may visit this region at any time in April when crowds are reduced, and temperatures are mild, between 51°F and 59°F degrees. Hotel costs range from $100 to $400 per night in Tahoe City or $120 to $2,000 in Truckee.

With the fewest residents of all major Tahoe cities (around 8,000 people), tourists may overlook Incline Village in favor of larger cities with more ski resorts. The weather begins to warm in April, ranging from 50°F to 57°F degrees during the daytime.

Hotel costs range from $140 to $800 per night, and there are fewer visitors in April. The best time to visit will be in early to mid-April, before the city’s only ski resort, Diamond Peak, closes for the season.