With over 2.5 million visitors annually, Mont Saint-Michel is one of the most popular landmarks in France. This island is home to a towering medieval abbey and a picturesque French town.

Mont Saint-Michel also has some of the most dramatic tides in the world, and knowing the best tide times can make or break your visit.

We have visited this place many times and would like to give you the best tips on avoiding crowds and making the most of the incredible tides. 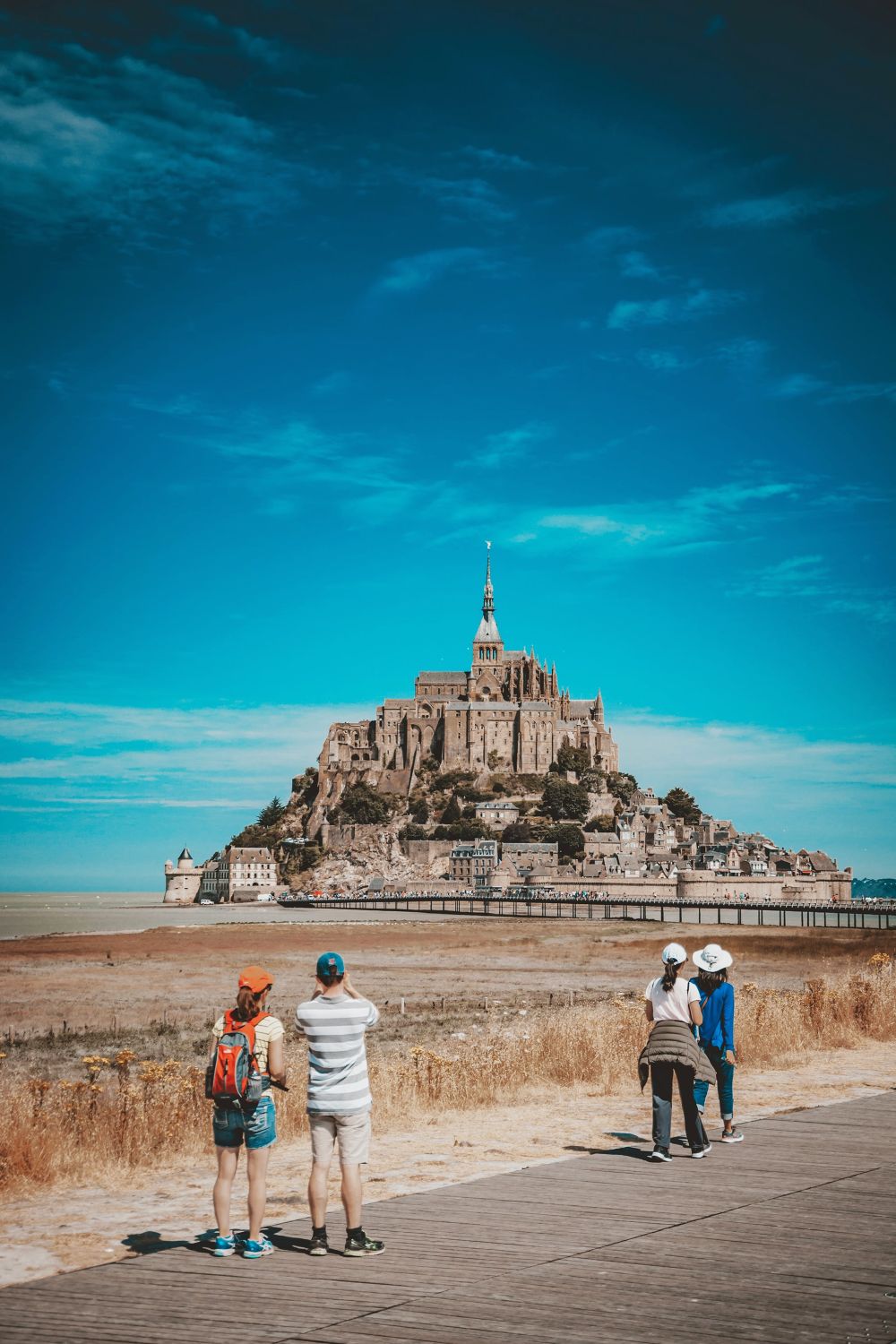 June to August is the best time to visit Mont Saint-Michel for pleasant weather. Summer offers the warmest temperatures in Normandy, one of the chilliest regions in France. The average temperature during these months can reach the lower 70s °F degrees (21°C).

May and September are also great times to visit, with slightly cooler but still mild temperatures.

While the winter months are pretty crisp and cold, it’s a gorgeous time to see the abbey slowly disappearing in the rising fog. Amazing to capture once-in-a-lifetime photos. 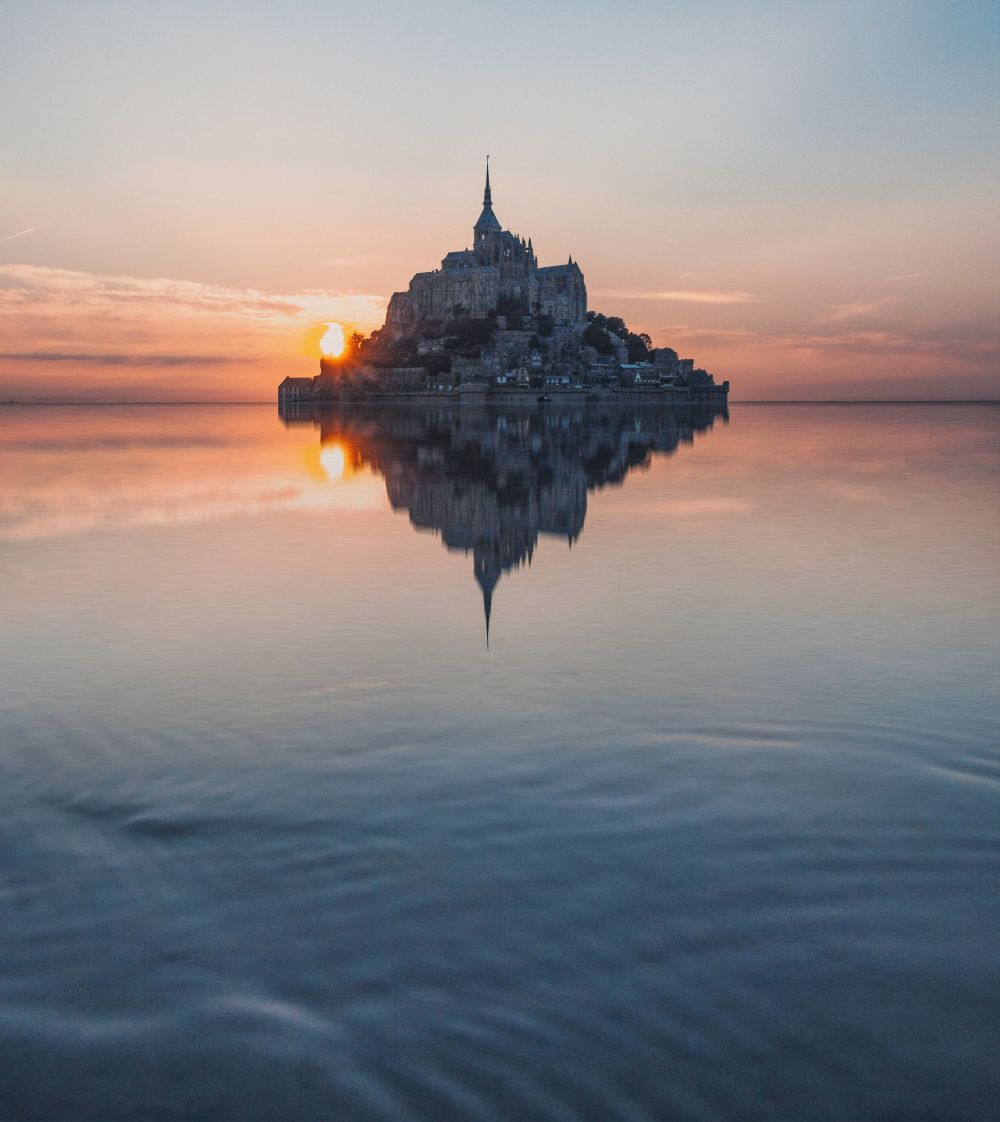 The best time to visit Mont Saint-Michel for watching the tidal bore spectacle is at full moon or new moon. You can witness Europe’s highest tides with differences of up to 15 meters between low and high tide during these times. 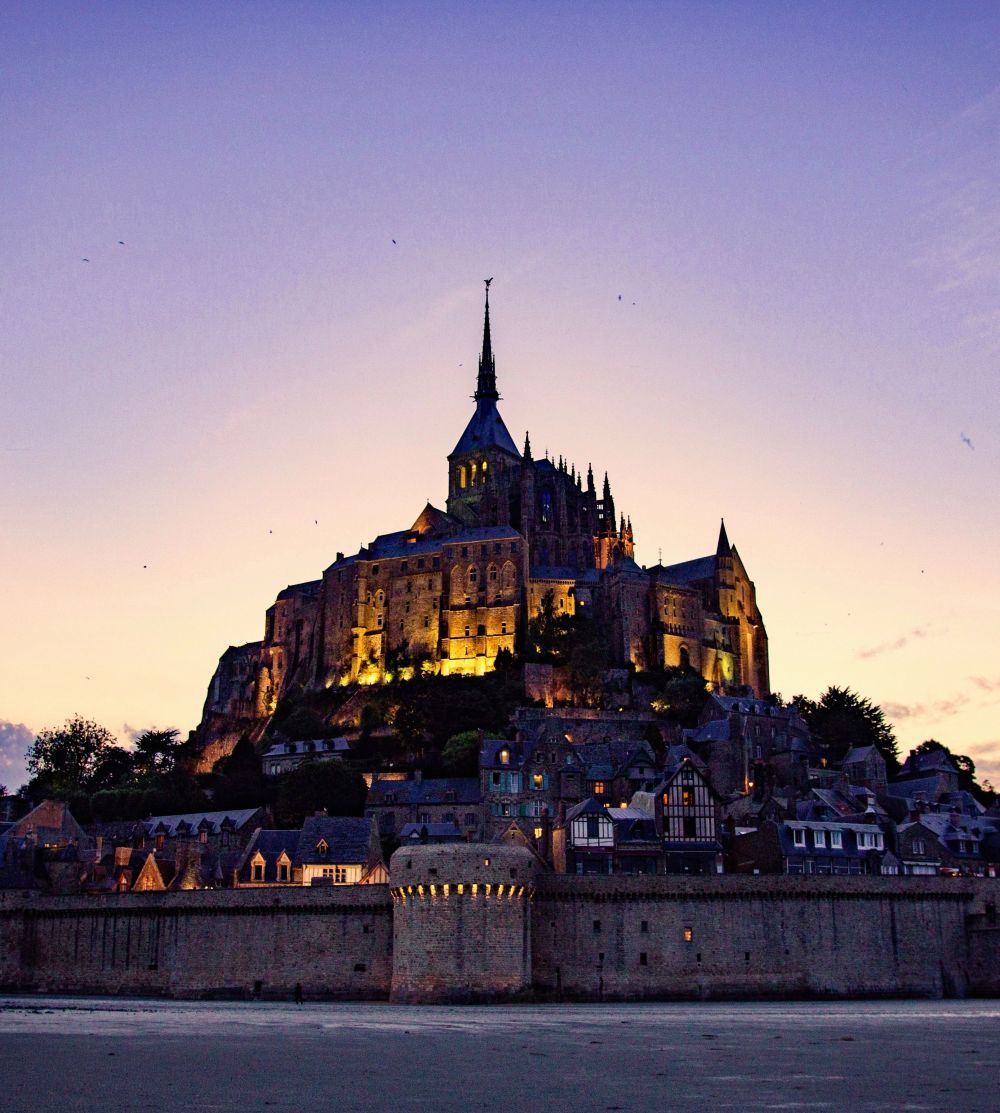 The best time of day to visit Mont Saint-Michel is in the early morning or early afternoon. It is easier to catch the shuttle bus to the island during these times without waiting in line.

Tip: A truly marvelous time of day is after dusk when the Abbey of Mont St Michel is illuminated.

More crowd tips? Read more below after the tidal tips on avoiding crowds. 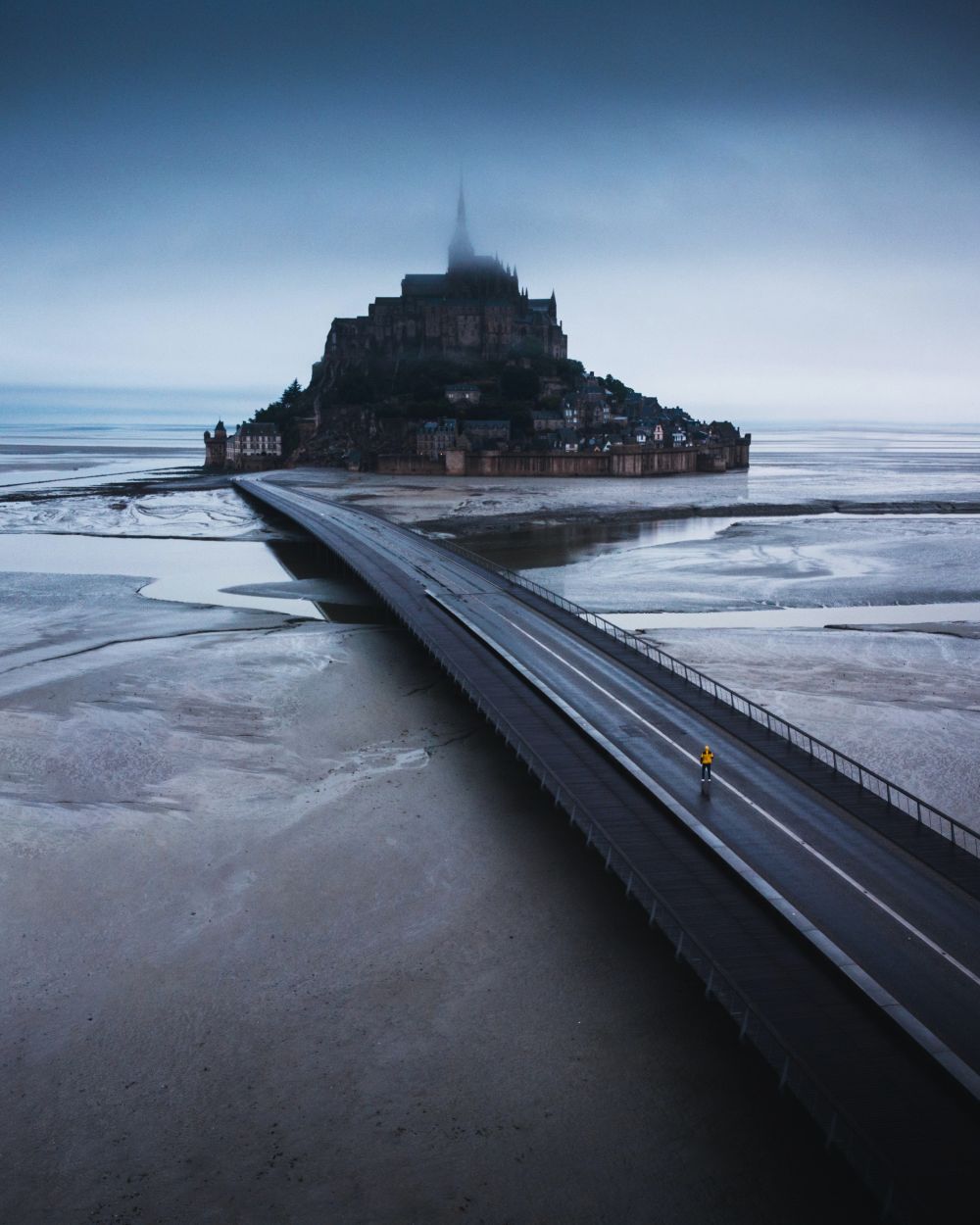 Plan your visit at low tide if you want to get out and tour the sandbanks around the island. Visit during very high tide to witness the power of the ocean and watch the entire island surrounded by the water.

Low tide tip: Since tides can be unpredictable, be sure only to venture out with a guided tour.

Good to know: Regardless of the tide, you can always reach Mont St. Michel without getting wet feet via the causeway. However, that’s impossible during the very high tides: The mountain becomes a completely isolated island when the so-called spring tide occurs. For about 1,5 hours, doors close, and access is not possible during that time.

How often does the very high tide occur? Only a few times a year. Read more below about the best tide schedule.

2022/23 Update: Nowadays, buying tickets (click the ticket banners above) in advance with time-slot admission times is critical to Mont St Michel. Left-over tickets may be sold on-site but even then, online tickets for same-day use are 1005 more comfortable (mobile voucher) and allow for direct access without waiting at the ticket counter.

The best and most comfortable way is to visit with a guided tour, including a skip-the-line ticket. That takes away all the headaches and hassle!

To see the island surrounded by water, visit Mont Saint-Michel at very high tide. The ocean completely isolates the island, only close to the full and new moons, offering some breathtaking views.

The highest tides occur 36 to 48 hours following the full and new moon. These are estimates and may be influenced by atmospheric conditions.

To see Mont Saint-Michel as a true island during those very high tide times (also called spring tide), you must visit at full or new moon. It is a unique occurrence during these few times each year that Mont Saint-Michel is completely surrounded by water.

When to arrive: To witness the rising tidal phenomenon, you need to be there two hours before the times stated.

Best months: The strongest high tides typically occur in March, April, September, October, and November when the sea level is above high enough. However, don’t worry if you can’t make it during a full moon, as the water still floods quite close to the island during regular high tides. It’s still a great experience.

The best tide schedule: There are many tide schedules and planners out there. However, almost all of them fail to highlight the very high (spring) tide days. We found this one to be the absolute best: Mont Saint-Michel Tide Schedule. The spectacular spring tide times are highlighted in red! If you’re looking for the 2022 (not online yet, Jan 2022) version, check their website: Tide Times. The tide schedule is in French. But even if you don’t know French, the times are super easy to spot.

Update 2022 (Second-Best Schedule): The website above didn’t update its schedules yet. In the meantime, use the second-best table: Tide Times Mont Saint Michael – Tabelle. It’s in German, but you can easily select the month and spot very high (spring) tides. These are marked in red and above 100.

Viewpoints: You’ll also have to decide what kind of view you want. For a view of the island, stay out on the causeway during high tide. To see the surrounding landscape, stay on the island.

Best viewpoints to observe the magical tidal bore? There are many lookout spots to see the tidal bore. One of the best viewpoints is from the ramparts of the Abbey of the Mont-Saint-Michel. If you want to get up close, you can watch the tides from the elevated causeway that connects Mont-Saint-Michel to the mainland. Alternatively, you could observe the enormous forces of nature in a safe location near one of the river mouths.

Can’t make it at a very high tide? For the best of both worlds, it’s actually not a bad idea to visit away from the full moon. At the highest of tides, the causeway is cut off from the island, and you’ll be stuck on either side until the tide recedes. 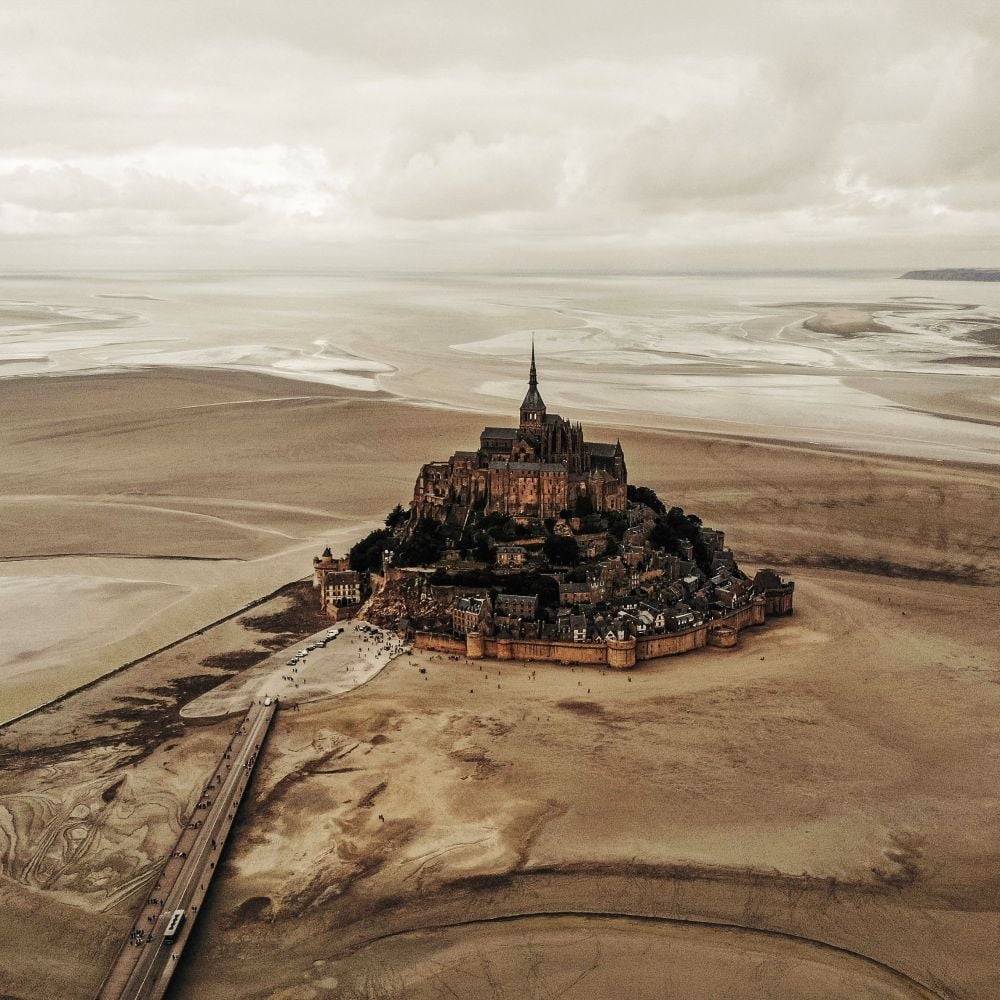 At low tide, you’ll be treated with views of Mont Saint-Michel surrounded by sand almost as far as the eye can see. Visiting at low tide and during normal high tides can also give you a more flexible schedule, as you won’t have to worry about water blocking the causeway.

Another perk of visiting at low tide is the chance to venture out and explore the sandbanks. Here, you can get a view of Mont Saint-Michel from every angle. It’s best to walk out on the sandbanks with a guided tour, as some areas of the shore have quicksand.

How Much Time Do You Need at Mont Saint Michel? 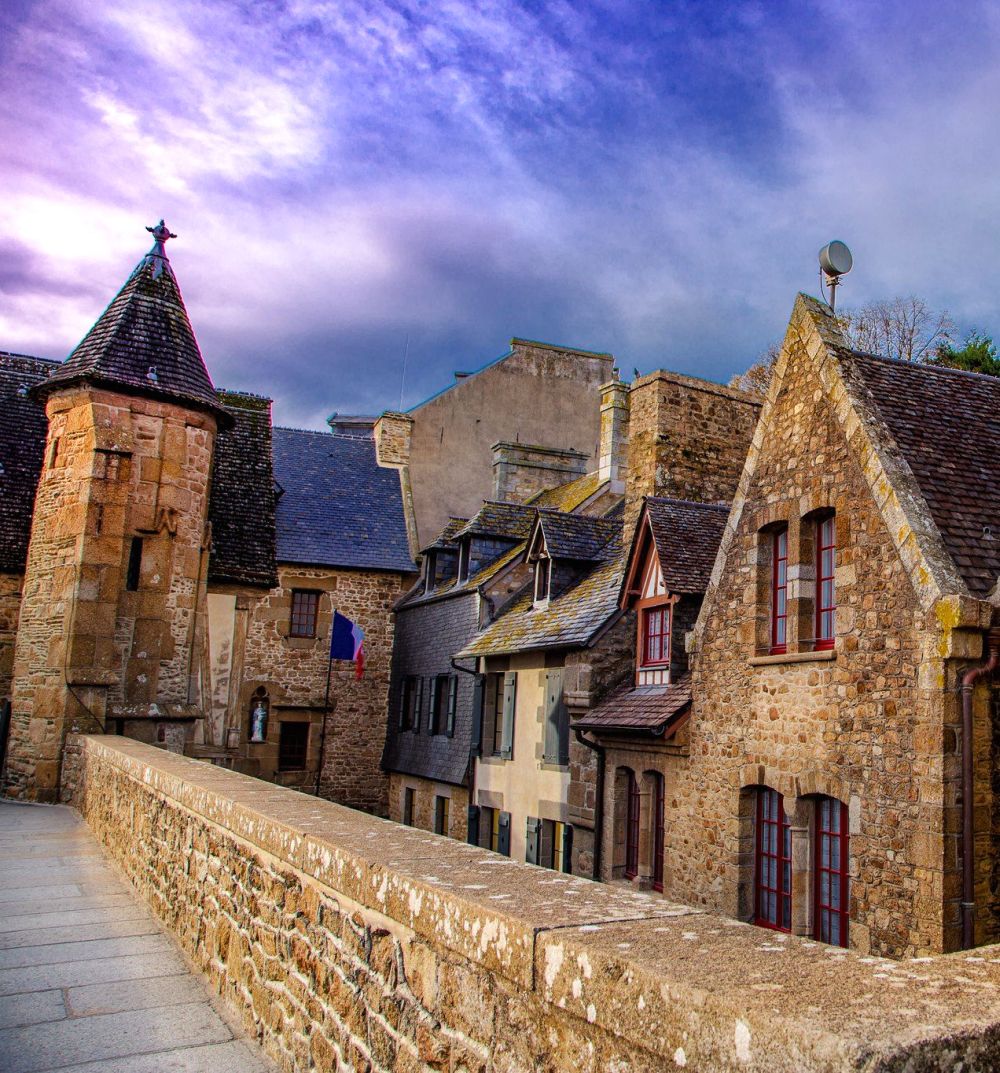 3-5 hours: To get the most out of Mont Saint-Michel, allow at least 3-5 hours for your visit. This should give you plenty of time to explore the town and visit the abbey. Allow a bit more time if you’d like to stop at a restaurant or take a tour out on the sandbanks.

One Day: While 3-5 hours is the minimum you should plan for, it’s possible to spend a whole day exploring Mont Saint-Michel. Getting lost among the cobblestone stairs and ramparts is one of the best activities on the island. You won’t want to worry about staying on schedule.

Additionally, staying long enough means you can watch the (very) high tide and explore everything during low tide as well. Explore hotels at Mont Saint-Michel (via booking.com with price match) 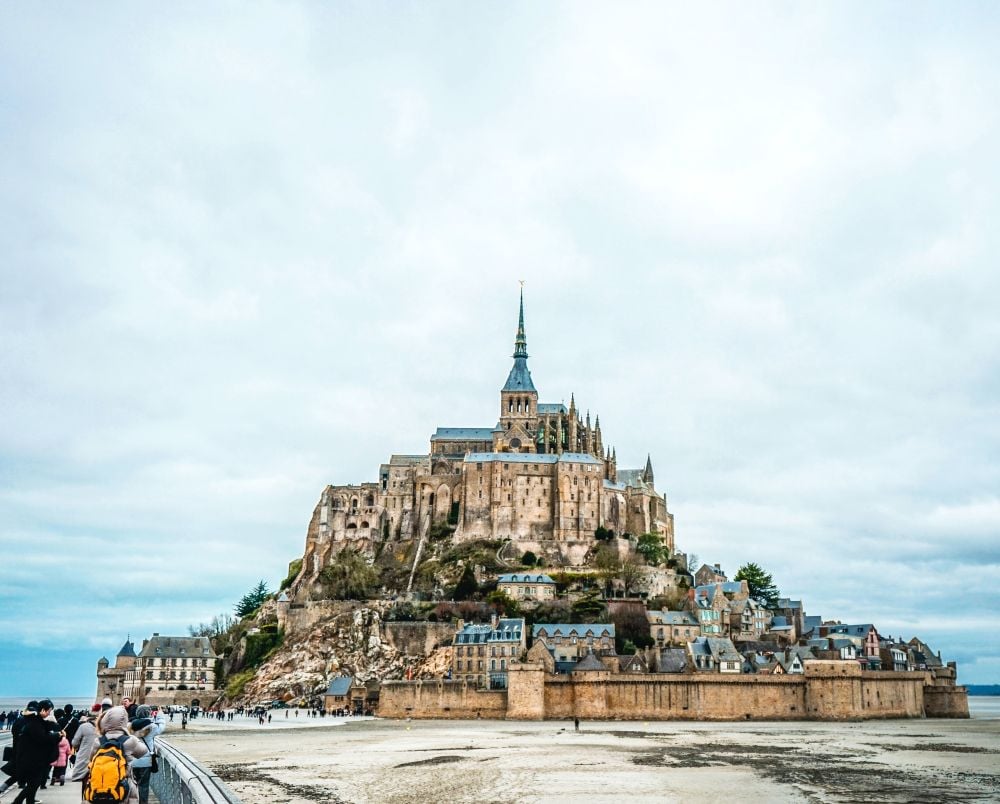 You’ll find the fewest crowds at Mont Saint-Michel during the winter off-season, from December to February. While the weather will be chilly in the mid-40s (°F), you’ll find that you’ll have the island almost to yourself!

If you’d like to visit Mont Saint-Michel with more ideal weather, visit during the shoulder seasons of spring and fall. March-April and September-October still offer mild temperatures, with much fewer crowds.

Time of Day: During the summer, you’ll likely find large crowds at any time of day. To avoid the worst of the crowds, aim to arrive before 9 am, or around 3 pm. That way you can avoid lines, as well as traffic heading into Mont Saint-Michel. 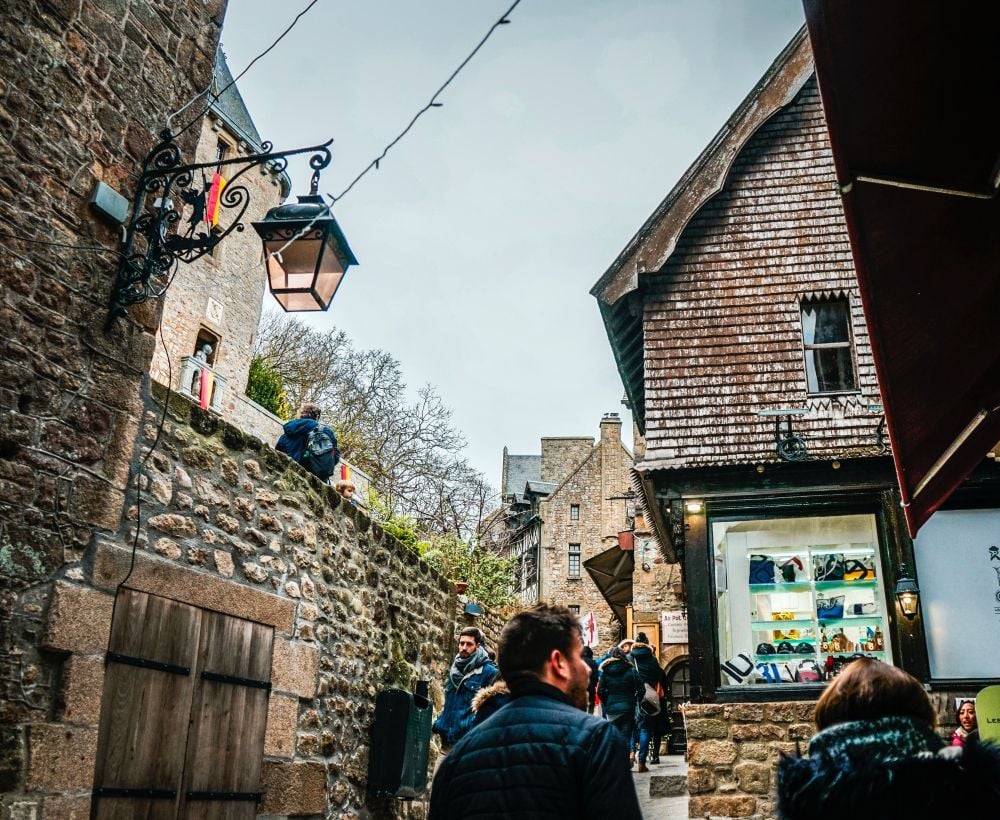 Is Mont Saint-Michel Worth Visiting? 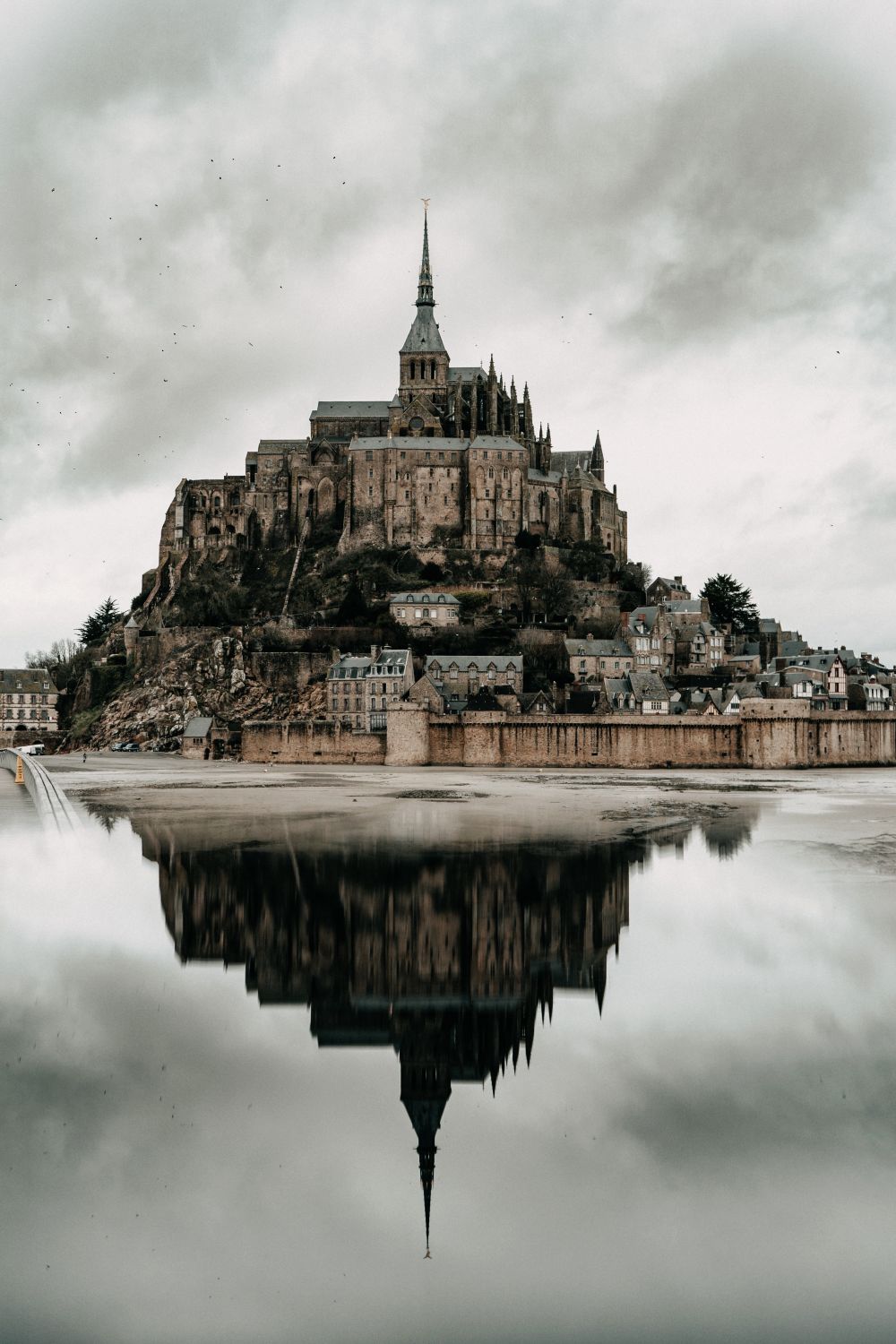 Mont Saint-Michel is worth visiting as one of France’s most spectacular destinations. Where else can you find an island crowned by a historic Medieval abbey? Whether you like panoramic views, history, or just small-town ambiance, Mont Saint-Michel has something unique to offer any visitor. 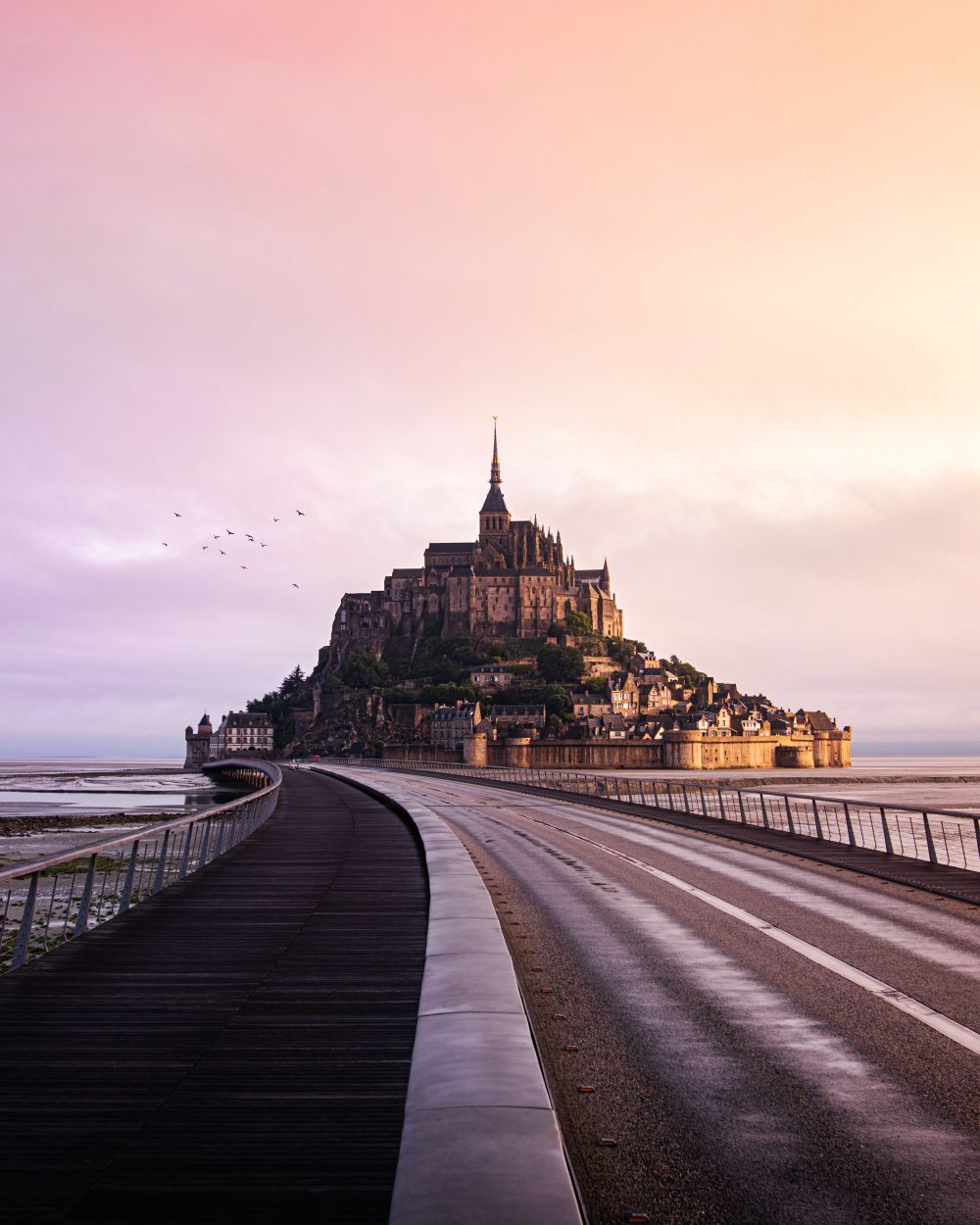 Weather: Fall brings some of Mont Saint-Michel’s rainiest weather. Temperatures remain mild until November when they drop into the low 50s °F (10°C). You’ll also see some of the year’s highest tides during fall.

What to Wear: While temperatures don’t get too low during the day, you’ll want to protect yourself against Mont Saint-Michel’s ever-present wind. Bring a warm jacket or windbreaker, and consider bringing extra rain protection, like a poncho or rain boots.

Crowds: Crowds thin out at Mont Saint-Michel as you get further into fall. In September, you may still see the remnants of the summer crush, but by November, you’ll be wondering where all the other tourists went!

Weather: The winter months at Mont Saint-Michel are quite chilly, with average highs in the 40s °F (4-5°C), and evening temperatures dipping into the 30s °F (around 0°C). The winter season also brings more fog and mist to Mont Saint-Michel, adding a mysterious ambiance to an already beautiful destination.

What to Wear: It’s best to dress warmer than you think you’ll need. While temperatures aren’t freezing, the wind can be biting. Bring gloves, hats, and warm socks, and wear your warmest jacket.

Crowds: Winter at Mont Saint-Michel sees the fewest crowds. If you can brave the cold, you’ll be rewarded with a visit unobstructed by other tourists.

What to Wear: It’s still quite chilly, so you’ll want to wear a nice jacket and pants to protect against the wind. While it’s not as rainy as other seasons, it’s still advised to bring an umbrella, as the weather can be unpredictable.

Crowds: Spring is the second busiest season, but the cooler temperatures still keep many tourists at bay. Spring is one of the best times to visit for a combination of nice weather and fewer crowds.

What to Wear: While it is much warmer, it’s still advised to bring a jacket to protect against the wind. As in any season, be sure to wear comfortable shoes.

Crowds: Summer is Mont Saint-Michel’s busiest season. It’s best to visit in June, as in July and August, the crowds can be overwhelming. 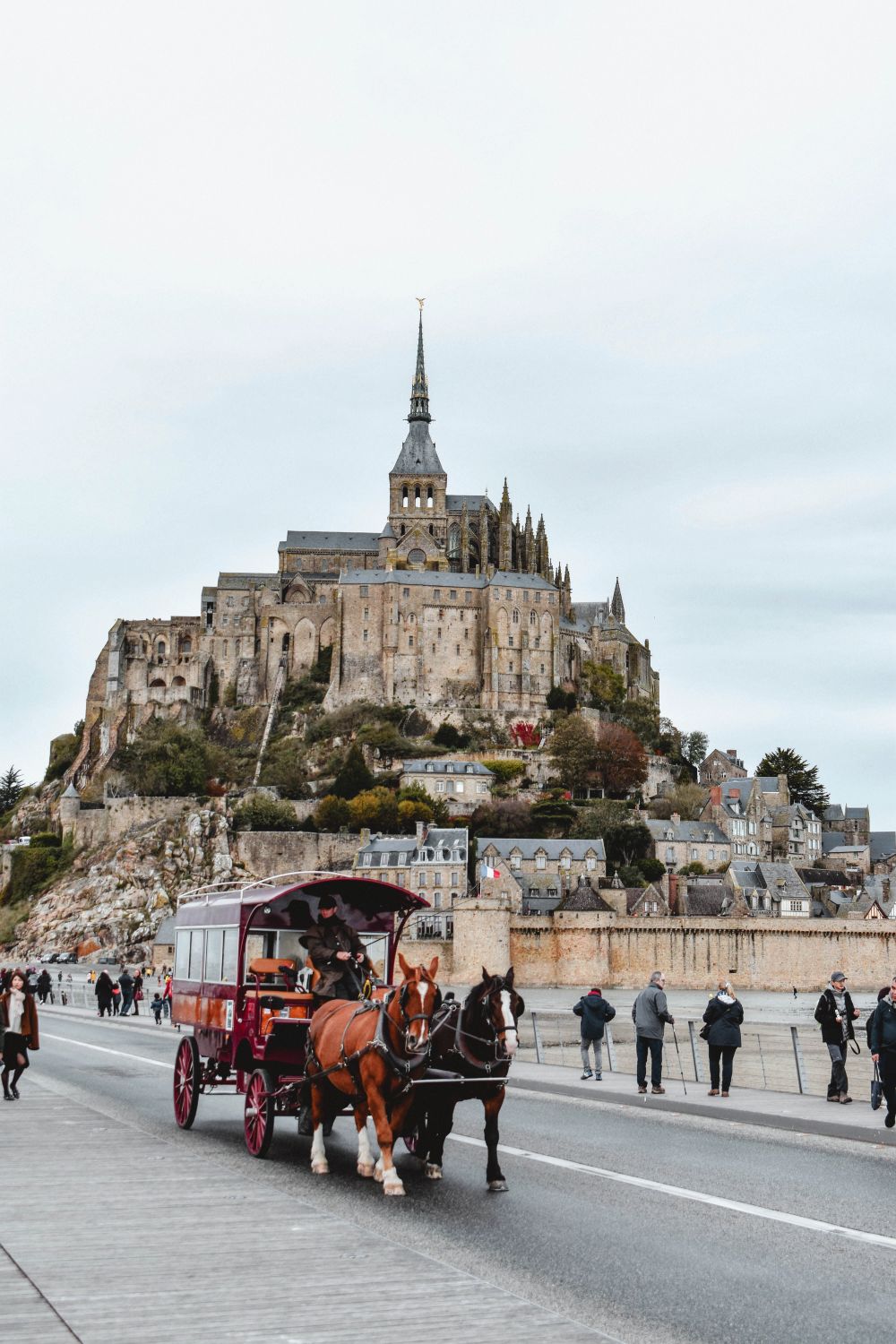 Tip: During your journey in this lovely country, we highly recommend visiting other gorgeous and popular landmarks in France.