The Canadian province of British Columbia has over 25,000 km of coastline, boasting more than 40,000 islands along the way. The dramatic scenery brings thousands of visitors every year, looking to make the most of the sandy beaches, impressive cliffs, and extensive hiking trails. The wildlife is another highlight of the region, and many of North America’s most iconic species can be found here.

One animal in particular which calls British Columbia home is the orca, also known as the killer whale. This large marine mammal thrives amongst the cold waters of the Canadian coast, and orca watching here is a popular activity.

But there is something about the orcas that live here that is highly unusual and sets them apart from any other orcas in the world. On a select few British Columbia beaches, the orcas engage in a strange behavior known as beach rubbing.

The orca rubbing beach is a coastal region where you can spot killer whales performing a unique behavior. Along the shoreline in shallow waters, orcas rub their bodies against the pebbles at the bottom of the sea.

It’s genuinely fascinating to watch orcas doing their rubbing right at the shore. It is something you will never forget. Don’t forget to bring your camera and charged batteries!

Where Can You See Orcas Beach Rubbing?

The best place to see orcas beach rubbing is north-eastern Vancouver Island. The official ‘Orca Rubbing Beach’ can be found on Malcolm Island.

Accommodation Tip: We highly recommend staying on Malcolm Island in the Oceanfront Hotel (via booking.com). It is right at the ocean and offers amazing views. For staying right at the pebble beach, we recommend Bear Point Campsite (Google Maps Location)

Nearby Hanson Island is another wonderful place to see orcas engaging in beach rubbing, as well as the bay at Robson Bight Ecological Reserve.

The behavior has also been seen a little further south, around the Discovery Islands – which lie at the northern end of the Salish Sea.

Beach Characteristics: The beaches used by orcas for rubbing have very similar characteristics – they generally slope steeply and have lots of loose, rounded stones. The orcas rub against the beach in shallow water, extremely close to the shore.

Groups of orcas have favorite rubbing beaches, which they return to time after time.

Why Do the Orcas Rub Themselves on the Beaches?

Scientists believe that Orcas do beach rubbing to maintain strong social bonds within their family groups. In other words, it is an activity, which helps to establish relationships within the pod. Orcas are known for being intelligent animals with complex social interactions.

No physical benefits: As they do not need to groom, it is not believed that beach rubbing has any physical benefits to orcas, besides perhaps being a pleasant sensation similar to getting a massage.

The process: Beach rubbing usually begins with a group of orcas communicating amongst each other using loud vocalizations. Next, they charge towards their beach of choice at high speed, dropping to the sea bottom in the shallow waters and kicking themselves along the stones, often taking turns. The behavior seems to be a source of great excitement to the orcas.

When to Spot the Orcas Rubbing at the Beach?

The best time of day to spot orcas and their rubbing beach behavior is on calm days without much wind and when the sea is smooth. Visitors report that they had the best success when being there in the morning hours.

Best Season: You can spot orcas in Vancouver Island year-round. However, if you would like to see whales as well, visit during the whale watching season from April to October. The peak time for whales in the region is from June to September.

Is This a Form of Animal Culture?

The only orcas known to engage in beach rubbing in British Columbia come from the resident northern population – one of the four orca populations found in the region. As the range of these populations overlaps, it is strange that the other three populations don’t rub themselves against beaches as well.

For this reason, beach rubbing is an example of cultural behavior, similar to family traditions in humans. Beach rubbing is passed down from one orca generation to the next, with older individuals in the group teaching the youngsters how to do it.

Despite overlapping geographically, these four populations each communicate in different languages and they don’t interbreed with each other.

The two resident populations are fish-eaters, specializing in hunting Chinook salmon. The northern resident population is much larger than the southern one, with over 200 individuals. They can be distinguished from southern individuals by their unique saddle patches and dorsal fins, which curve towards the rear.

Are There Other Places in the World Where Orcas Beach Rub? 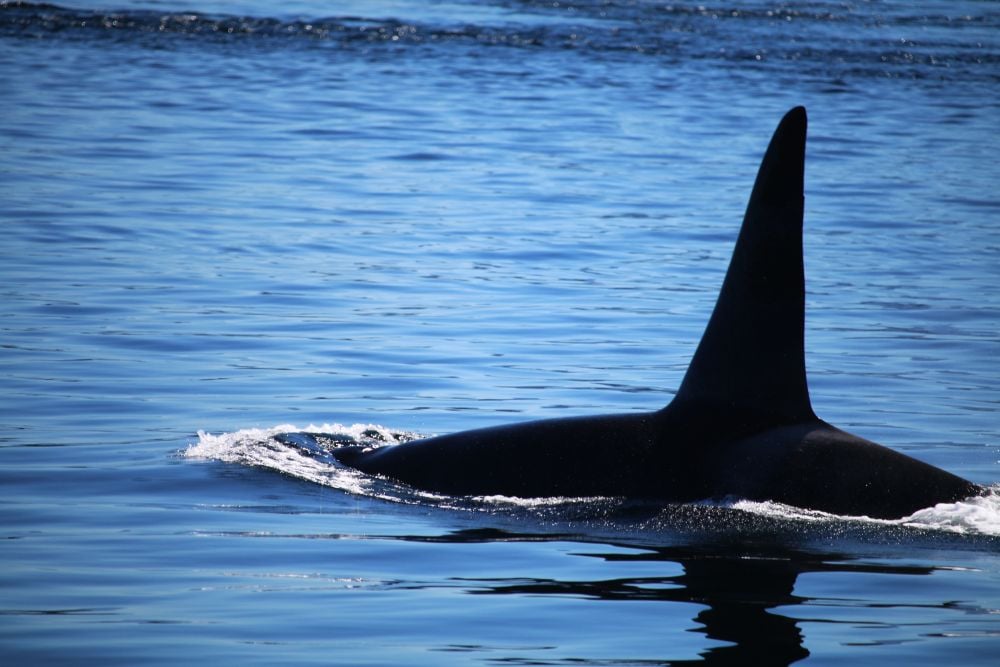 While beach rubbing is most commonly observed in the northern resident orcas of British Columbia, the behavior has also been recorded among some members of the ‘AK pod’ – a group of orcas that reside in Alaska. Members of this group have been spotted beach rubbing on beaches in Prince William Sound and the Kenai Fjords.

The range of this group of orcas overlaps slightly with that of the northern residents of British Columbia, however, it is not known how often the two populations come into contact.


Our recommended hotel deals. See above! Bookmark the results to save money in case you don’t book now. 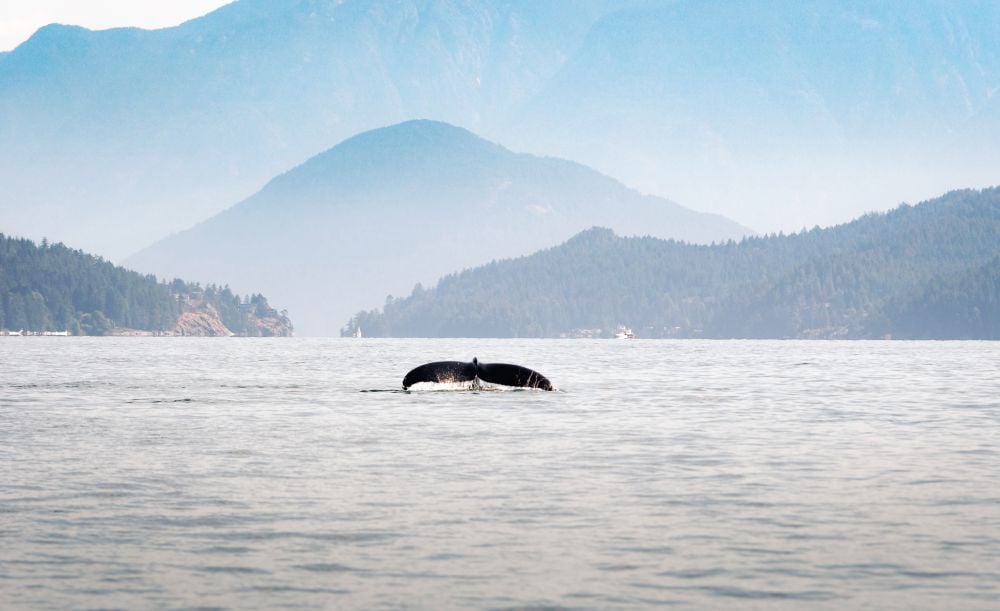 Spring is a beautiful time of year to visit Victoria and Vancouver Island to watch orcas from the beach and other wildlife. April and May are also the months when whales become more abundant.

As the winter frosts recede, the cherry blossoms and other fascinating flowers bloom. Additionally, the chilly cloud cover lifts to show more sunny skies. During the daytime, temperatures vary from the low 50s to the low 60s on average.

The summer months are perfect for orca watching at the beach on Vancouver Island. The temperatures are pleasant, and it’s a great time for camping nearby. However, it’s also the busiest season.

Outdoor activities such as whale watching become more appealing when there is little rain and temperatures in the upper 60s and low 70s.

Be prepared to pay premium rates for your hotel stay. When making a reservation, it is best to do it at least six weeks in advance to increase the chances of a room.

Vancouver Island’s autumn weather can be brisk, with temperatures ranging from the upper 40s to the upper 60s. However, it’s still a great time to try to spot some orcas rubbing at the beach.

And as winter approaches, the amount of rain increases steadily. However, as long as you have a couple of warm sweaters and a raincoat in your luggage, you shouldn’t have to worry about the weather interfering with your travel plans.

Since summer tourists are driven away by the lower temperatures, you may expect to get some bargains on hotel rooms during this time of year.

However, while the prospect of spending the winter in Canada may make you shiver, you should not count out visiting Vancouver Island during the off-season. Especially not if you plan to visit the beaches for orcas and other wildlife.

The winters in this part of British Columbia are among the mildest in the country, with average high temperatures in the low 40s on a regular basis.

In addition, because many travelers aren’t ready to withstand the colder months, you’ll be able to get affordable hotel accommodations. The likelihood of precipitation is higher this time of year, so make sure to carry your rain gear.

Besides wishing to spot Orcas at the beach. We recommend checking out the tours above in Victoria, Vancouver Island. We did all of them and they are just amazing. A must-do if you are in the area.

This atlas with stunning photos is the perfect gift for national park lovers.