We went to Tenerife multiple times during different months to find out about the best months for whale watching. Additionally, we spoke to many local whale experts.

The best time for whale watching in Tenerife is between November and February. During this period it’s possible to spot humpback whales and sometimes blue whales or fin whales.

However, whales can be spotted year-round in Tenerife. Read our monthly guide below for more details about each time.

Three hours of whale watching on a luxury yacht with the most knowledgable, passionate, and helpful crew you can imagine. Click the link to learn more or the banner above. We had a once-in-a-lifetime whale watching experience with these guys. This tour even includes a pickup and drop-off at your hotel in Tenerife South. 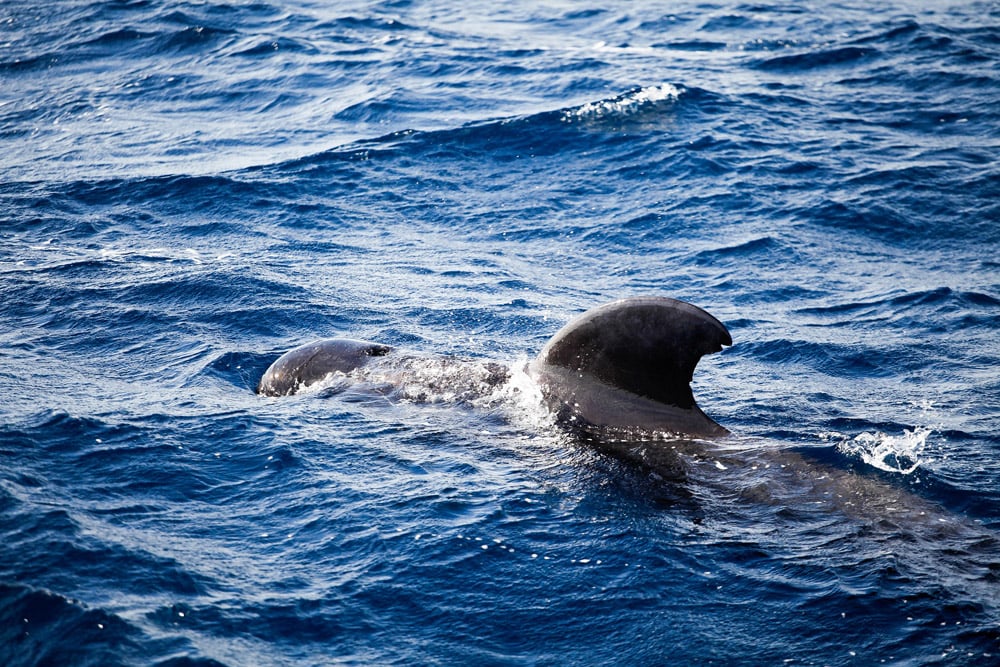 January is an excellent month for whale watching in Tenerife, as it’s the height of migration season. This is often the best time to see humpback whales. Blue whales and fin whales may occasionally be spotted, while pilot whales and dolphins are common.

In February, the whale winter migration begins to tail off in Tenerife, meaning this is often the last chance to spot migrating humpbacks, fin whales and blue whales. Pilot whales are sighted often and you can expect good opportunities to see bottlenose dolphins.

In March a few early sperm whales can be spotted around Tenerife’s shores. Along with pilot whales and dolphins, you may also be able to see late fin whales passing the coast on their migration.

April is often the best month to catch a glimpse of a sperm whale in Tenerife. Pilot whales remain common sightings, with bottlenose dolphins and Atlantic spotted dolphins being possible encounters.

In May pilot whales are usually the highlight of this month, although dolphins are also sighted frequently. This is usually the last month when sperm whales are present around Tenerife. The rising air temperatures make it a pleasant time for whale watching

In June you can expect to see pilot whales and dolphins with regularity in Tenerife. Although rare, there are also occasional sightings of killer whales during this month. Early summer also brings an increase in the number of tourists to Tenerife.

In July. pilot whales can be spotted frequently around Tenerife’s shores, with bottlenose dolphins being another highlight. Temperatures can be hot and it’s best to come prepared with hats and sunscreen.

August is one of the busiest months of the year for Tenerife’s whale watching trips. Despite this, you can expect good chances to see pilot whales and dolphins, with Killer whales sometimes appearing for lucky visitors.

In September, pilot whales and dolphins are usually the only species to be seen around Tenerife’s waters. It can still be a good month for boat trips, however, as tourist numbers dip and the weather begins to get a little cooler.

October is another quiet month on the water in terms of whale sightings. Despite this, Tenerife’s resident pilot whales can still be seen on many trips and there will be chances to see bottlenose dolphins as well.

During November, the whale migration begins to kick off again and there will be a few chances to see early humpbacks or fin whales around Tenerife. Pilot whales and dolphins are regularly sighted during this month.

December is a good whale watching month in Tenerife, with opportunities to see humpback whales and fin whales passing along the coast. If you’re lucky, you may also see migrating blue whales, while pilot whales will also be present. 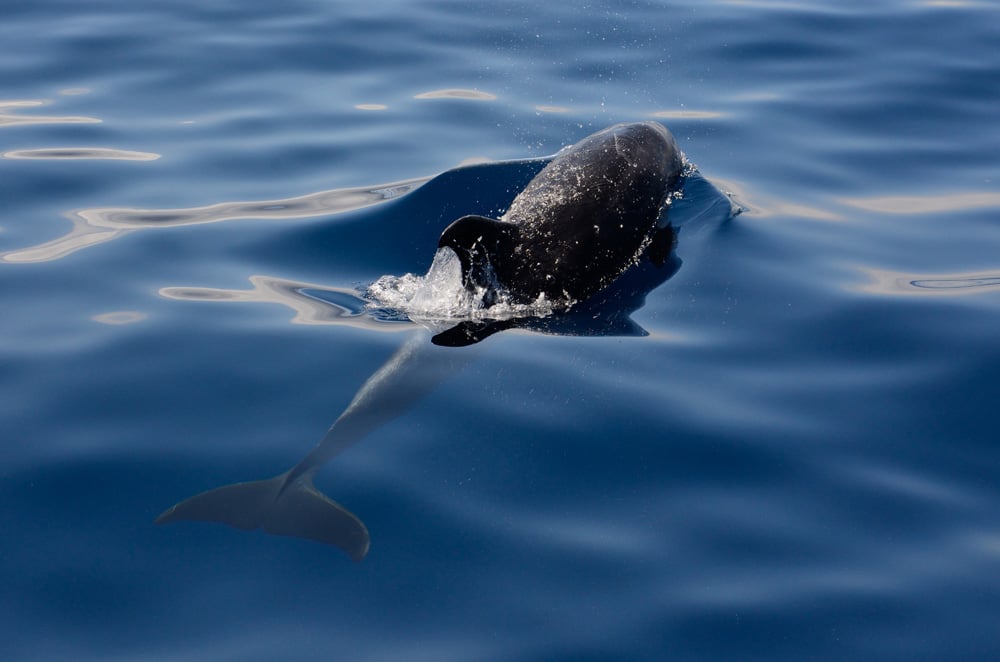 The season for migrating whales in Tenerife is from November to February. However, unlike in some parts of the world, Tenerife’s general whale watching season lasts all year round, with chances to see whales each and every day.

The island’s location in the Atlantic Ocean is on the migration route of some of the largest whale species, and a whopping 17 different cetaceans have been recorded around Tenerife’s waters in total. Not only that, but it’s a beautiful destination which offers very reliable weather conditions for whale watching.

Pilot whales are the stars of Tenerife’s waters, despite their relatively small size in comparison to other cetacean species. They can be found in the area all year-round and are by far the most common sightings on boat trips. A playful animal, the pilot whale can be a delight to watch and is usually seen in pods of up to 30 individuals.

Sperm whales are springtime visitors to the Tenerife coast, usually spending the rest of the year in deeper waters. These spectacular animals are incredible divers, capable of reaching depths of over 2km. They embark on these vertical journeys to hunt for their favourite food – squid.

The second largest species on Earth, the fin whale is one of the fastest cetaceans and can reach a speedy 29 mph in short bursts, earning it the nickname “the greyhound of the sea”. The fin whale is a filter feeder and its diet is mostly made up of krill, small fish and squid. It’s also quite a rare species and any chance to see a fin whale up close is an experience to savour.

One of the most widespread whale species, the humpback spends the summer months close to the poles, before migrating towards the equator to breed. humpback whales are very long-lived species, with some individuals reaching 100 years old. They’re also very social creatures and can usually be found in groups of 2 – 4 individuals.

Blue whales are one of the less common sights around Tenerife’s shores, tending to stay further out in deeper waters, rather than coming close to the coast. A true ocean giant, these creatures are a fantastic sight to see and pass Tenerife on their long, annual migrations. 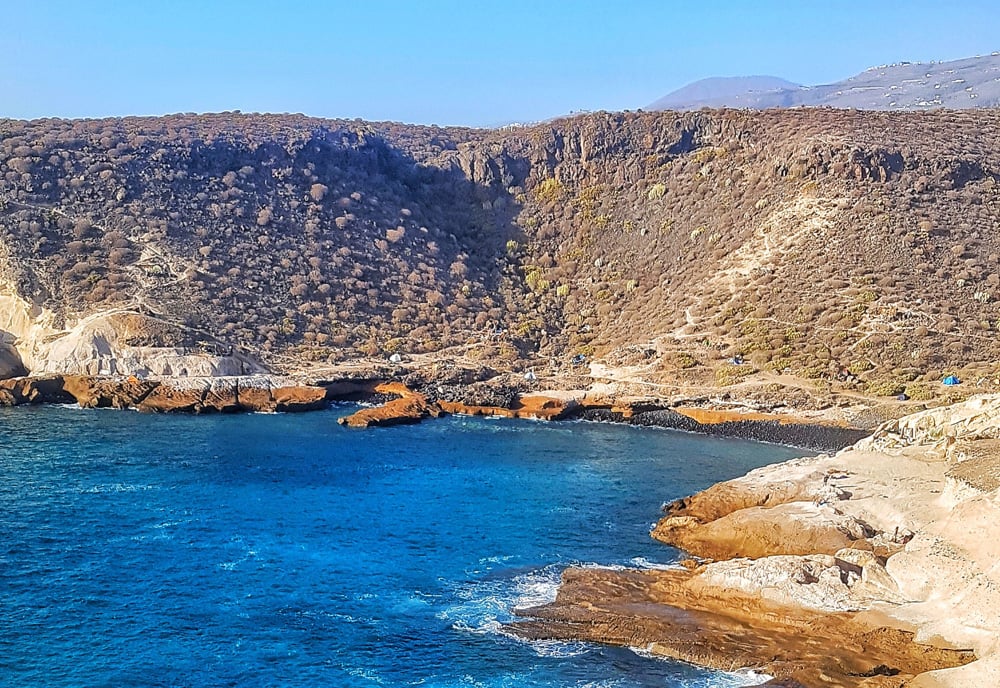 Costa Adeje forms part of a small town located on Tenerife’s southern coast. It’s one of the best places for whale watching on the island and is home to a large population of resident pilot whales. There is a deep ocean channel not far offshore and this acts as a highway for some of the larger, migratory whale species, which pass Costa Adeje at certain times of year. Several companies operate boat trips from the town’s harbour and the area offers some outstanding coastal views and beautiful beaches. 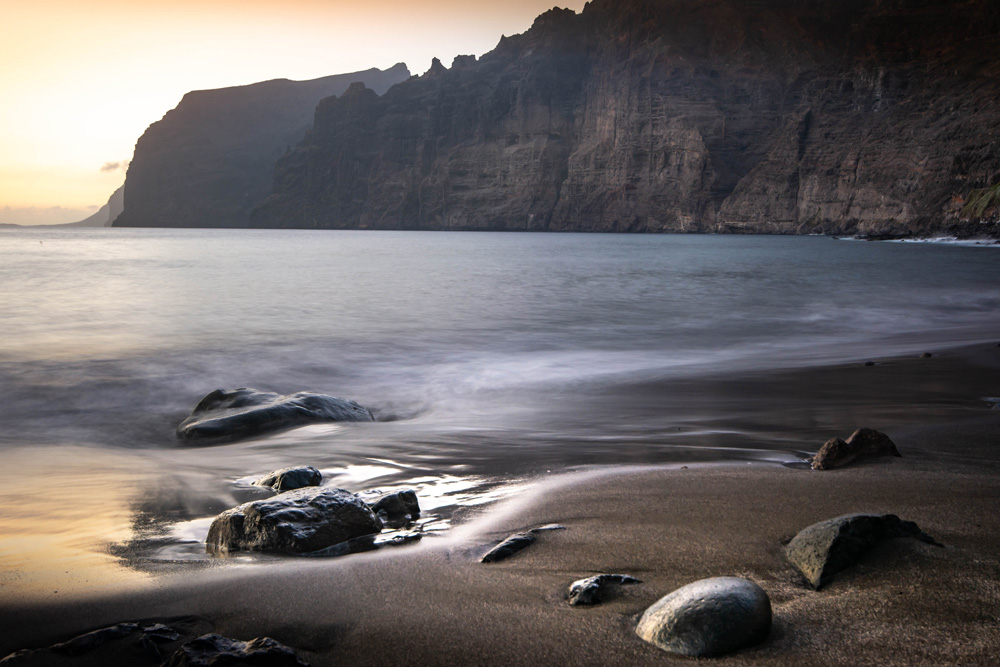 Los Gigantes is probably the most spectacular place to go whale watching in Tenerife, and is a small town on the western coast. Its name stems from the impressive nearby cliff formations – known as Acantilados de Los Gigantes – which rise 800m above the ocean. These can be a great backdrop for a boat trip. Although there are fewer boat tours here than at Costa Adeje, the opportunities to see whales and dolphins are just as good, with the area being a popular feeding ground among the smaller cetaceans especially. 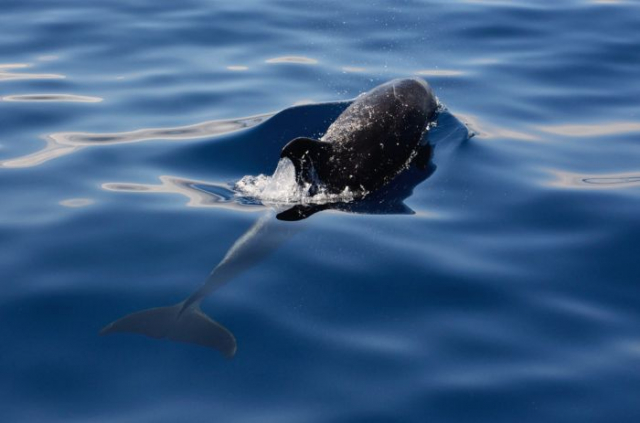 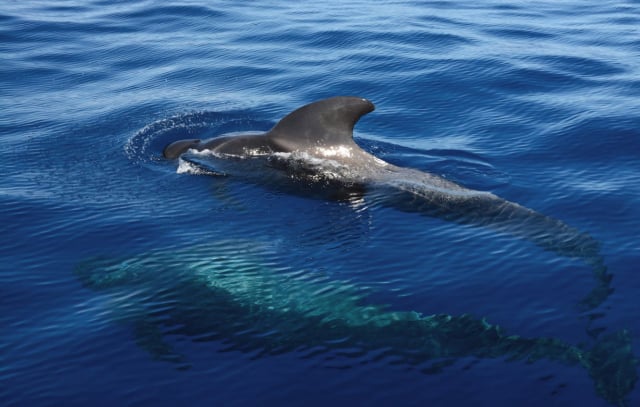 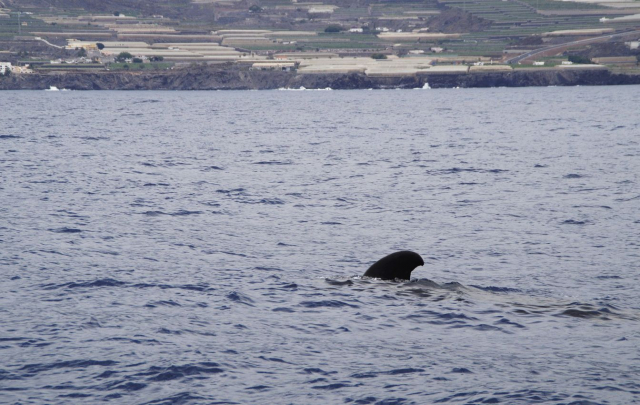