Visiting California in February is always a great idea. With this guide, you will know what to wear, the best activities, and the best places to visit throughout the month. This article was written by two California locals.

February in California has mild daytime temperatures with a decent chance for rain, wind, and cloudy skies. The average high temperature ranges from 44°F at Lake Tahoe, the coldest area of California, to 73°F at Palm Springs, the warmest place.

Regional Differences: Temperatures differ significantly across this enormous state and between elevations. The coast and mountains are cooler, while most inland places are mild and pleasant. For instance, there is often snow in the mountains in February, while there is warm sunshine on the beach.

February is a fabulous time to visit California for great weather and to avoid the crowds.

Perceived Temperature: Most visitors from regions with cold winters will find most of California in February to be warmer than their home region, but many Californians still see this as a “cold” time of the year. They aren’t wrong; with freezing nighttime temperatures, California is cold. However, people traveling from snowbound regions will see that California’s winter is mild. 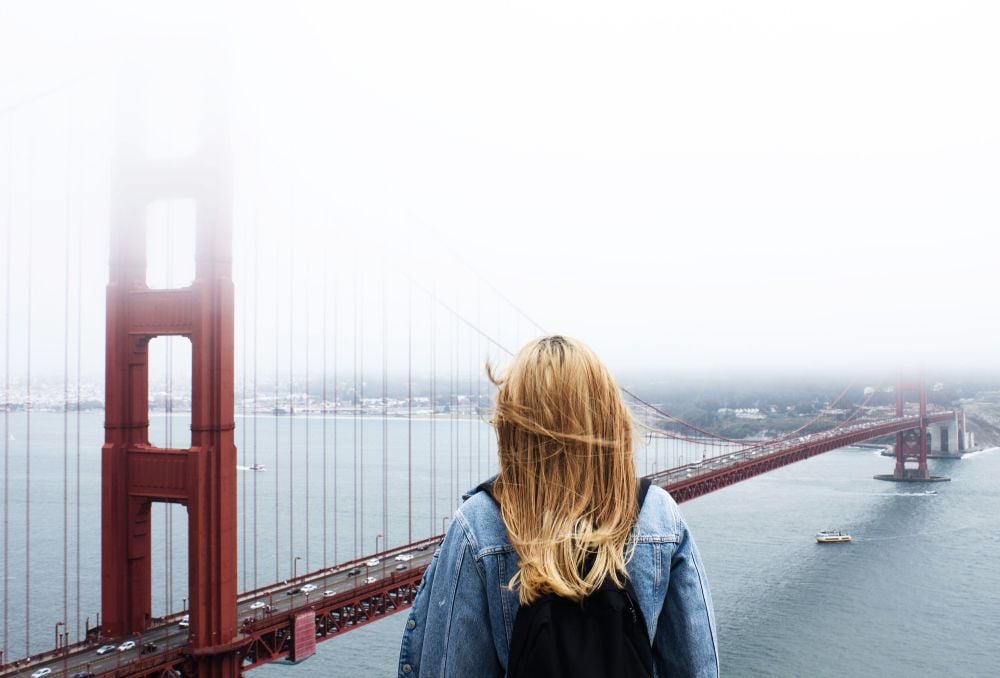 February marks the end of the cool, wet winter. It’s also the wettest month in California, with one to two inches of rain statewide. However, daytime temperatures are pleasant and mild throughout the month. Additionally, there will be warmer days by the end of the month.

Mountains are full of snow while inland areas like the desert are warm and sunny, making February a month where the California dream is possible: ski and surf on the same day! Just bring your waterproof gear.

If you plan a February visit, read our article about how many days you should spend in California. 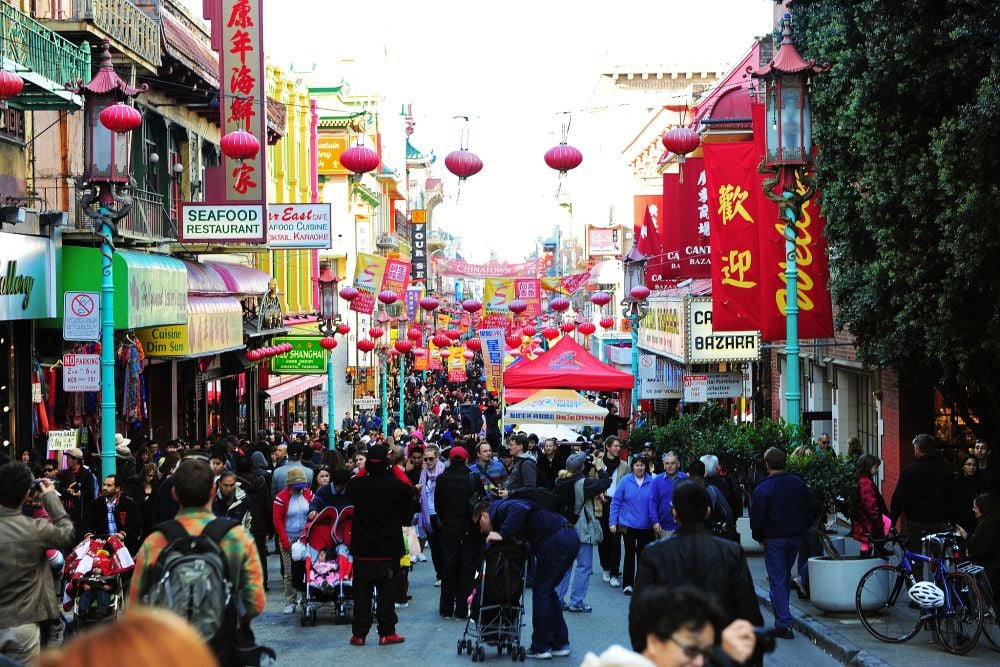 During February in Northern and Coastal California, expect temperatures between 50°F and 70°F degrees except in Lake Tahoe, where daytime temperatures are much colder. While Lake Tahoe is the coldest city, San Diego will be the warmest and sunniest.

While it’s often sunny, you’ll also need to prepare for rain, clouds, and at higher elevations for snow.

February is the wettest month across California, and this region gets the most rain in the state, between one to two inches of precipitation.

Tip: Always bring layers for a February visit in Northern and Coastal California.

While February is the high season for winter visitors to Lake Tahoe, this is a low-season month for other cities in this region. Only Presidents’ Day, a long weekend, means more visitors.

You can stay in major cities like San Francisco for some of the best accommodation rates of the year (Hotels in San Francisco – via booking.com). If you’re planning to vacation in Tahoe, though, book your place months in advance.

February is also a great time for whale-watching tours in San Diego or for whale watching in Monterey, California.

Events: February is the best time to celebrate the Lunar New Year, and the perfect place for that is in San Francisco’s Chinatown. San Francisco celebrates the most-attended Chinese New Year outside Asia. No matter which day you arrive, there will always be an event, from parades to the blessing of shops by lion dancers. There is no better time in February to visit San Francisco than the Chinese New Year.

Lake Tahoe: The main attraction this month will be Lake Tahoe. Visit for snowshoeing, ice skating, downhill or cross-country skiing, sledding, or hiking in the snow. Afterward, attend any of the hundreds of après ski happy hours in the Tahoe Rim cities. Better yet, celebrate the Mountain Festival in North Lake Tahoe.

The California coast has its weather system, particularly in the winter and early spring months, like February. Coastal cities are mild, damp, and cool. Conversely, daytime temperatures can even be hot in the inland region of Northern California, like Napa Valley.

February is San Francisco’s wettest month, with over two inches of rain. However,  you’ll also see some beautiful sunny and clear days as well. The temperatures are cool to mild throughout the day. For visitors, this is a welcome change from the cold winter days in other parts of the country.

Daytime temperatures in San Francisco typically reach a high of 60 F° degrees. However, near the end of the month, you can expect the occasional day with a high temperature of 70 F° degrees or even higher.

Morning and Night: The evening and morning temperatures are quite mild in San Francisco, between 45 F° and 53 F° degrees.

February is a great month to visit Napa Valley to avoid the crowds. Daytime high temperatures range from a mild 59°F to a warm 79°F degrees throughout the month. At night it gets a lot colder, with temperatures in the 30s and 40s. The region receives over two inches of rain, like San Francisco.

February is an ideal month to visit Lake Tahoe for a winter snow session. Daytime high temperatures range vastly between 35°F to 70°F degrees. Visibility is excellent, and the winds are calm, making this California’s best snow town. Nighttime temperatures are cold, dropping to the 20s. The region receives over 70 inches of fluffy snow in February.

February in Southern and Central California often includes mild days, brisk nights, and a lot of rain. Temperatures reach a high of 70°F degrees in Los Angeles, and you can expect rain at least a quarter of the month.

February is the essential spring month in California, so wear layers of long shirts, pants, sweaters, and waterproof jackets. In colder regions such as Yosemite and the mountains, bring thicker layers like down jackets, hats, scarves, and gloves for chilly temperatures as cold as 30°F degrees.

Most of February is the low season for travel in California, with only Presidents’ Day long weekend bringing larger crowds in the third week of the month. February is often the best time to fly domestically or within the state; roundtrip flights in February can cost as low as $75 between Los Angeles and San Francisco.

February is a great month to see the Oscars and Disneyland. In late February, crowds gather outside the Dolby Theatre in Hollywood to see the world-famous Academy Awards, or “Oscars,” but you’ll need to get there hours in advance if the events are in person.

Tip: If you’re going to visit Disneyland in February, know that this is one of the quietest and most underrated months to visit the park.

Los Angeles receives over an inch of rain in February. While it’s the wettest month rainfall only occurs on 6 days on average. The evenings, nights, and mornings are chilly. However, the afternoon temperatures are pleasant, even borderline hot.

During the day, temperatures often reach a high of 70 F° degrees in Los Angeles. Sometimes you can expect temperatures to rise to the upper-70 F° or even mid-80 F° degrees, especially east of Los Angeles in the inland cities. These temperatures are consistent across most of the month.

Morning and Night: February’s early morning and late-night average low temperatures in Los Angeles can be mild, between 46 F° and 58 F° degrees.

In February, daytime temperatures in Yosemite National Park will likely be mild. However, the park experiences wet and cold weather, with freezing or below-freezing temperatures at night and early morning. Due to winter conditions, check the weather forecast and information about road closures.

February’s average high temperature in Yosemite Valley is about 62 F° degrees. It snows in Yosemite for an average of seven days in February, and there’s a strong chance of rain, ice, and snow throughout the park.

Further north, the Sacramento area also experiences the wettest month of the year in February, with nearly two inches of rain this month. Like Yosemite, Sacramento and other Central Valley cities experience mild daytime temperatures reaching a high of around 60 F° degrees Fahrenheit.

February is a festive month to visit the desert. Temperatures are perfect in Palm Springs and Coachella: sunny, with an average high temperature of 73 F° degrees. Some days, the temperature reaches into the mid-80s. Evenings and early mornings are merely brisk, as low as 45 F° degrees.

Death Valley National Park will be a little colder, dropping to freezing at night. And while this is technically a wet month, you shouldn’t expect more than a few sprinkles; the desert only receives half an inch of rain in February.

In February, in the desert, wear spring and summer clothing layers like t-shirts, long-sleeved shirts, and shorts or loose pants. At night, particularly in Death Valley, layer with winter clothing like sweaters, hats, scarves, gloves, and jackets.

Good to know: Temperatures vary considerably in the desert, and you should prepare your attire for these daily variations in hot and cold.

In February, you will experience more visitors to cities like Palm Springs, as this is one of the most pleasant months in the desert.

If you’re an architecture geek, buy a ticket for the Palm Springs Modernism Week in late February to explore the city’s world-famous building design. Further southeast in the town of Indio, celebrate the Riverside County Fair and National Date Festival.