Luckily it’s possible to see whales throughout the year. However, with our tips, your next whale-watching trip will become an even better experience. Don’t miss our 7 Monterey Whale Watching Must-Know Tips in the middle of this article.

The Monterey whale watching season for gray whales runs from December to May, with peak times in January and March. They migrate to California during the winter to give birth to calves. Humpback whales can be spotted year-round in Monterey Bay. 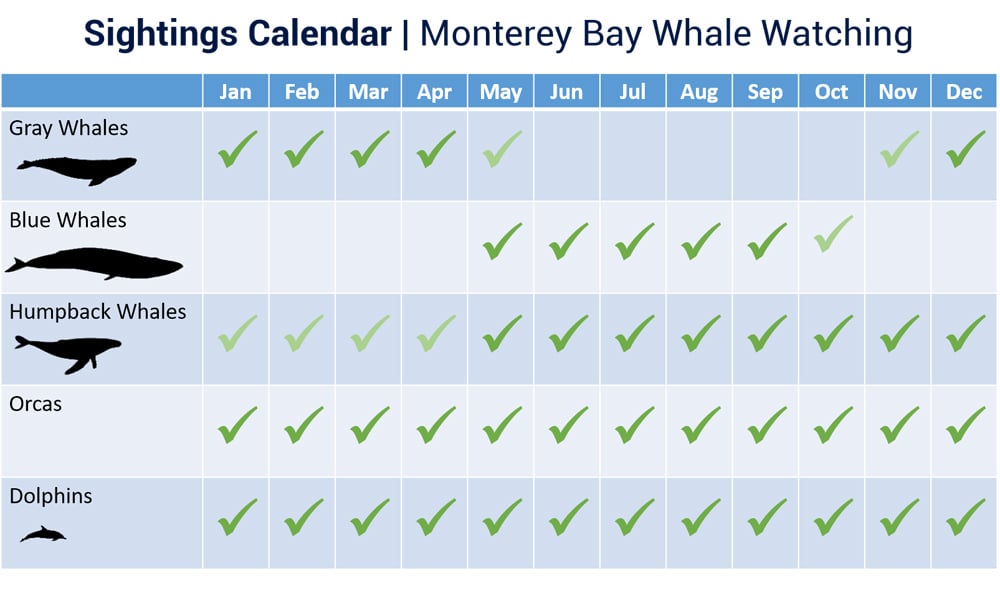 The best time for whale watching in Monterey Bay is in the winter months, between December and May. You can spot humpback whales and the fascinating gray whales during that period.

However, Monterey in California is an excellent year-round whale watching destination, as you can spot those many whales all year long from January to December.

Please check tour availability via the calendar above. You can still decide after pressing ‘book now’!

How Long Is the Whale Watching Trip 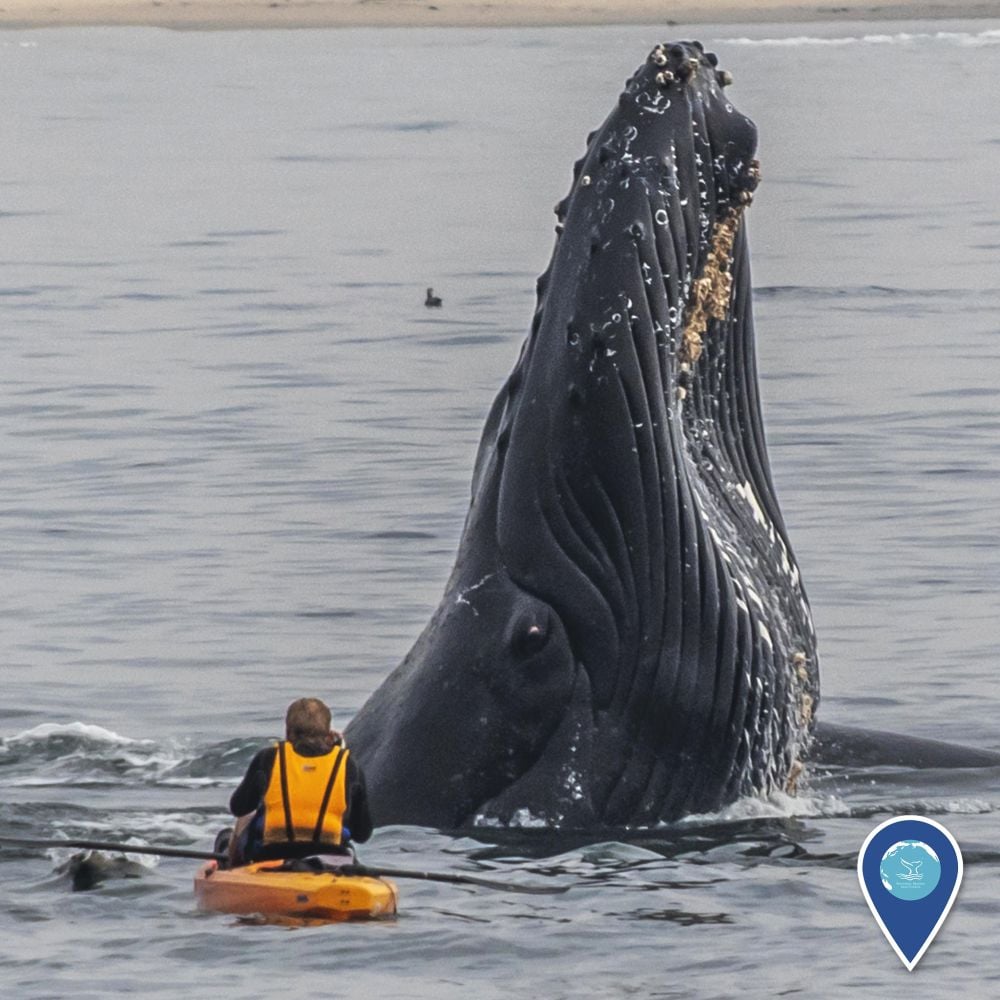 The morning whale watching tour in Monterey Bay lasts between 3.5 to 4 hours. The afternoon tour has a shorter duration and takes between 2.5 and 3 hours. The morning trips are longer because the crew is searching the area to make plans for the best afternoon route. During the summer season, a sunset tour is also being offered sometimes.

All three major Monterey whale-watching tour operators are excellent. However, we always chose ‘Discover Whale Watch.’ Their crew is outstanding and offered us the best experience we ever had on a whale-watching trip! This is a must-do whale-watching excursion! Epic!

Please check tour availability via the calendar above or here: Monterey Bay – Whale Watching Tour | via GetYourGuide (with exceptional customer service.) Important: Book in advance as capacities are limited, especially during the pandemic. Their standard tour details:

What Is The Best Time of Day 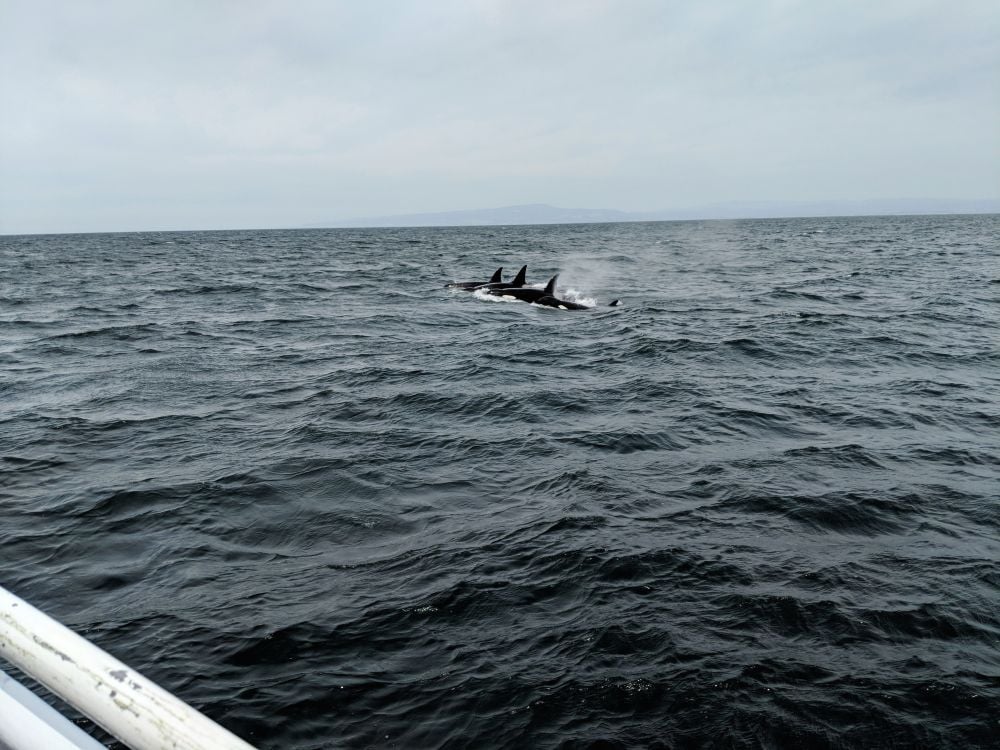 The best time of day for whale watching in Monterey Bay is in the morning. While the sighting chances are the same, the ocean conditions are more convenient with a calmer sea. In the afternoon, a boat tour can become quite choppy.

When Can You See Orcas in Monterey Bay 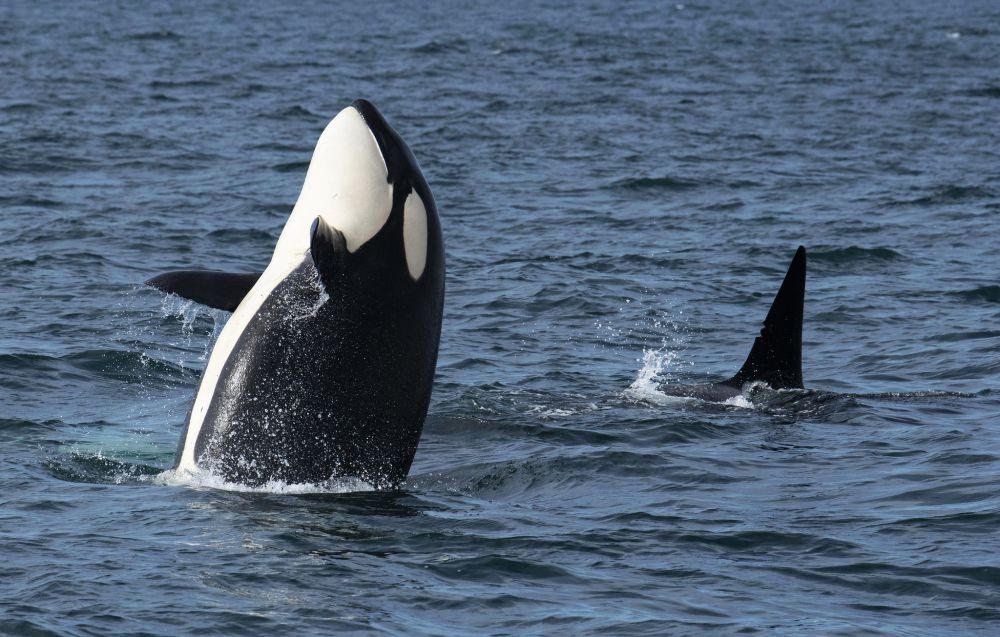 Orcas sightings are possible year-round in Monterey Bay. The peak months to see them are April, May, and June. However, orcas (killer whales) are less likely to spot compared to humpback whales. 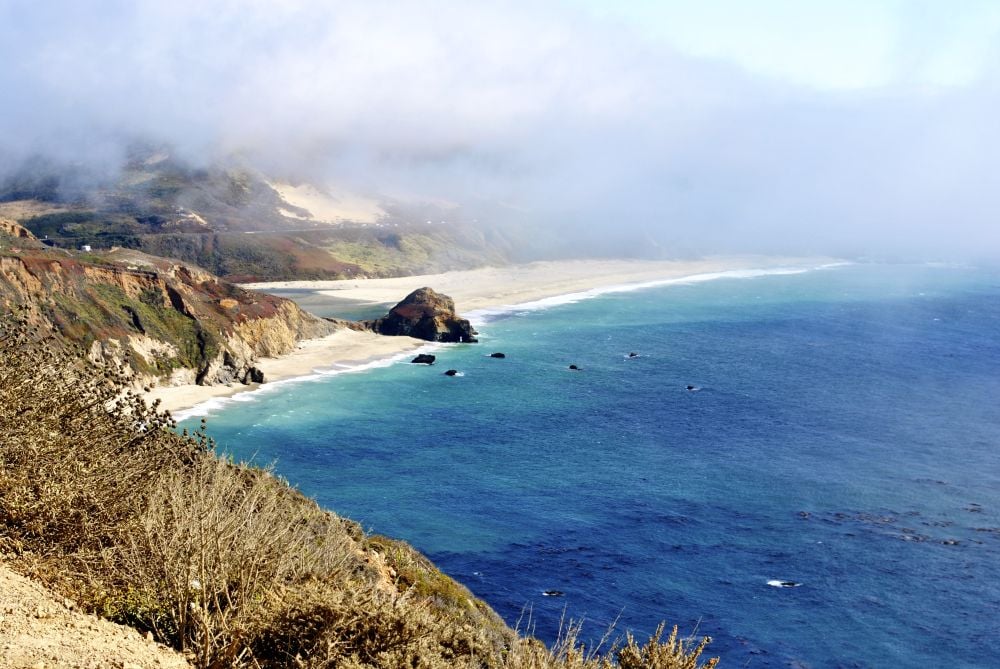 It’s possible to see whales from the shore at Monterey Bay. Especially, humpback whales are frequently spotted from the coast. Places for sightings are Asilomar State Beach, Point Sur Lighthouse, and near Highway 1. Another excellent spot to see humpback whales feeding is near the beaches of Moss Landing at the tip of the Monterey Submarine Canyon.

Other Whales: You may also spot gray whales from land along the Monterey Bay shoreline. However, it’s less likely to spot orcas or blue whales from the shore. 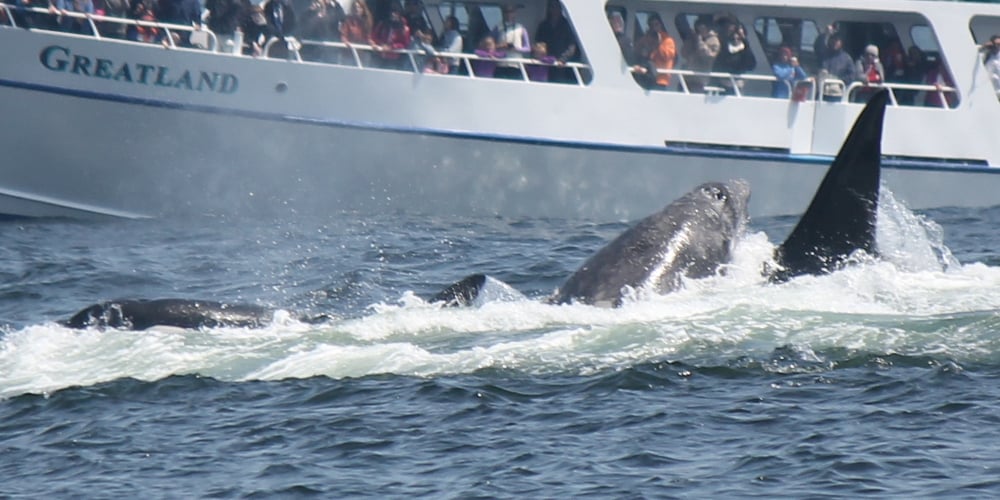 Dolphins: While Risso’s dolphins can be seen year-round, species such as common dolphins are spotted in the winter months in impressive numbers at Monterey Bay. 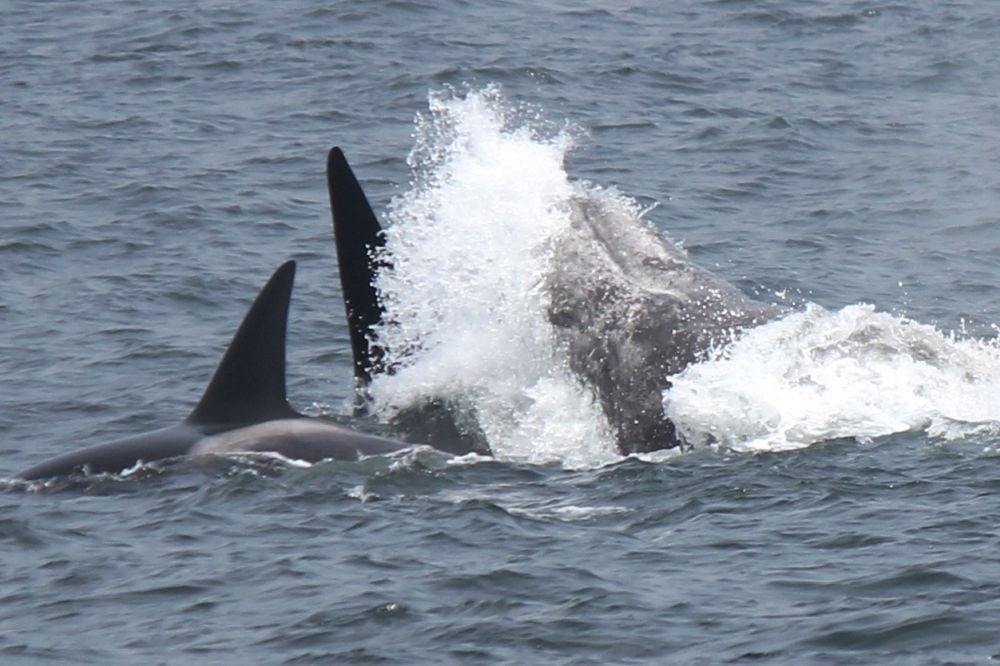 Winter: The winter season is a golden opportunity to see gray whales at Monterey Bay. These magnificent creatures spend the summer months in the cold waters of the Arctic but return to Baja, California, to mate and give birth to calves.

Gray whales have one of the longest mammalian migrations on record, averaging incredible distances of up to 14,000 miles. They are a very curious species and will sometimes come right up to boats, offering truly fantastic experiences for whale watchers.

Spring: As winter turns to spring, gray whales continue to grace the seas of Monterey. Having spent a few months raising their calves, they begin to migrate northwards again, granting unique opportunities to see young whales traveling with their mothers. 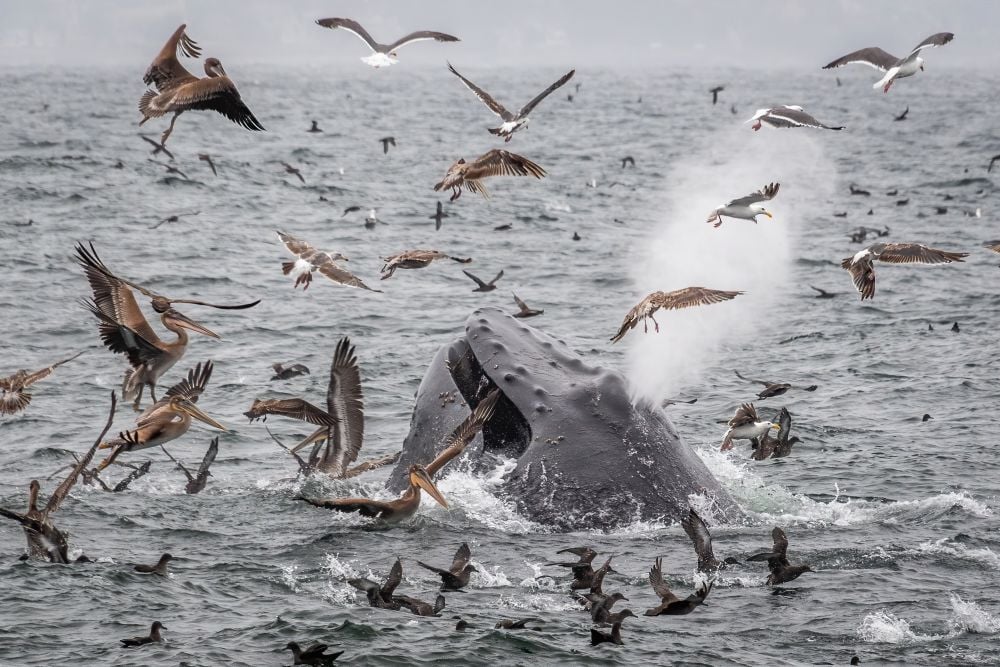 Winter: Humpback whales usually spend the winter season in the coastal waters of Mexico and Central America and not in the waters of Monterey Bay, California. That means they are not as abundant here as between spring and fall. However, you can still spot Humpback whales in the winter months. The reason is that some of them choose to stay in Monterey Bay to capitalize on the abundance of food.

Spring: From April or May, the migratory humpback whales start to come back to Monterey Bay. Their return results in a larger population of humpbacks between spring and falls with great sighting chances. They come to hunt smaller prey such as anchovies and krill. 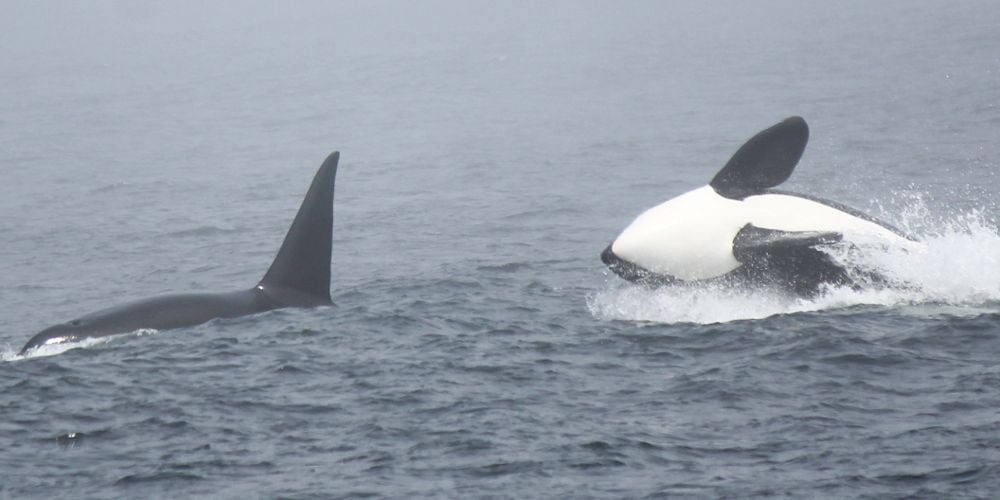 Winter/Spring: While killer whales (orcas) are active year-round in Monterey Bay. However, April, May, and June is their peak period, when they feed on migrating gray whales, typically mother and newborn calves.

Killer whales are the largest species in the dolphin family and are known for being skilled hunters with complex social systems. And while their presence can sometimes scare other marine life away, seeing one of the most intelligent animals in the seas can still be an amazing experience.

Other sightings include dolphins, seals, and the occasional shark. 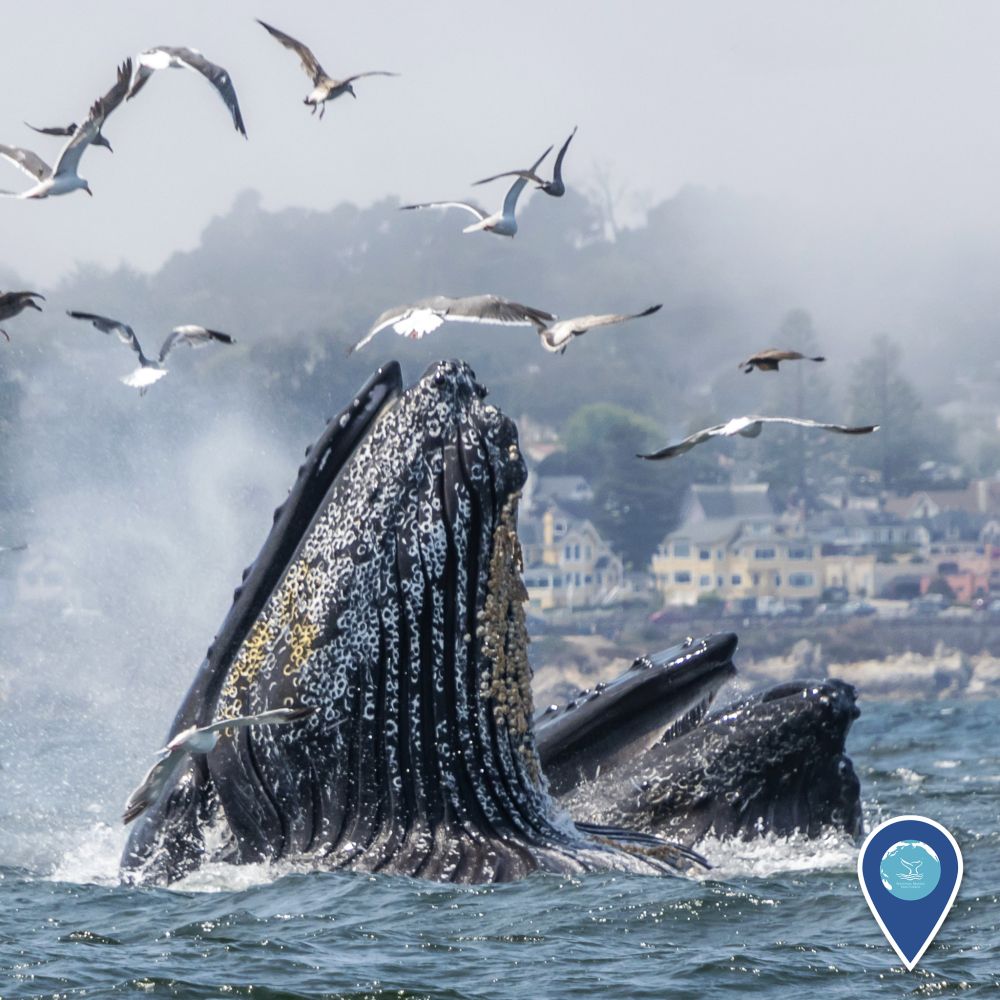 The whale watching opportunities in Monterey Bay are not only excellent in the winter and spring. In addition, the summer months (June – August ) and fall (September – November) provide great sighting chances every day.

The fall months tend to bring about the best weather conditions in Monterey, with mild temperatures, clear days, and little to no rain. While present throughout the year, humpbacks can be easily spotted during this time and can provide truly spectacular sights. 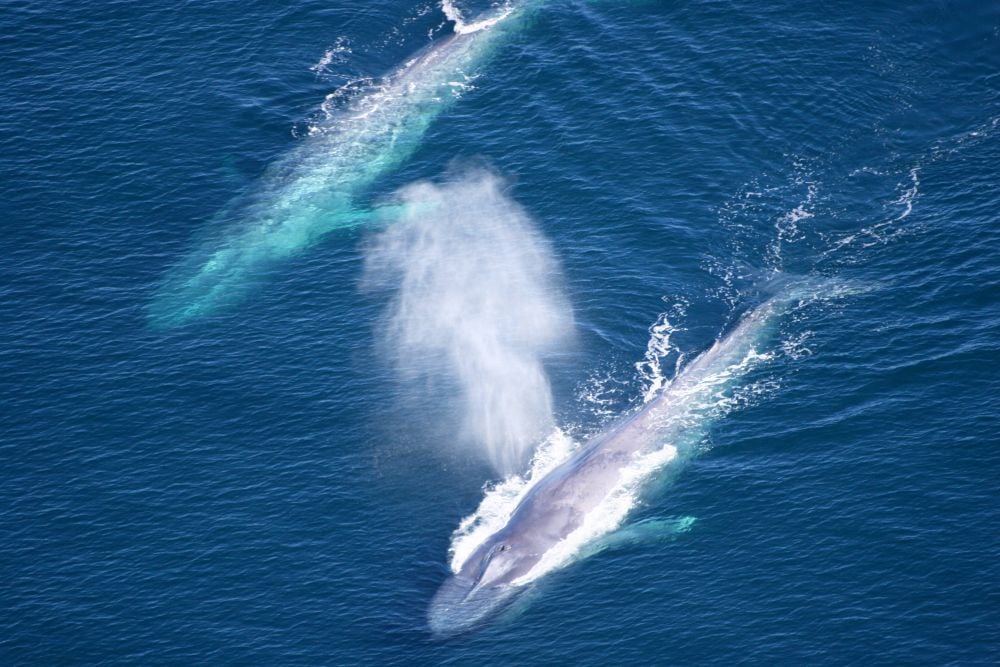 Coldwater currents during summer bring upwellings of nutrients to the Californian coast. These nutrients cause explosions in plankton populations, which in turn provide rich feeding opportunities for even the largest of marine species – the blue whale. Often seen in pairs, these majestic animals have become more common in recent years and are a spectacular highlight for any whale watcher. 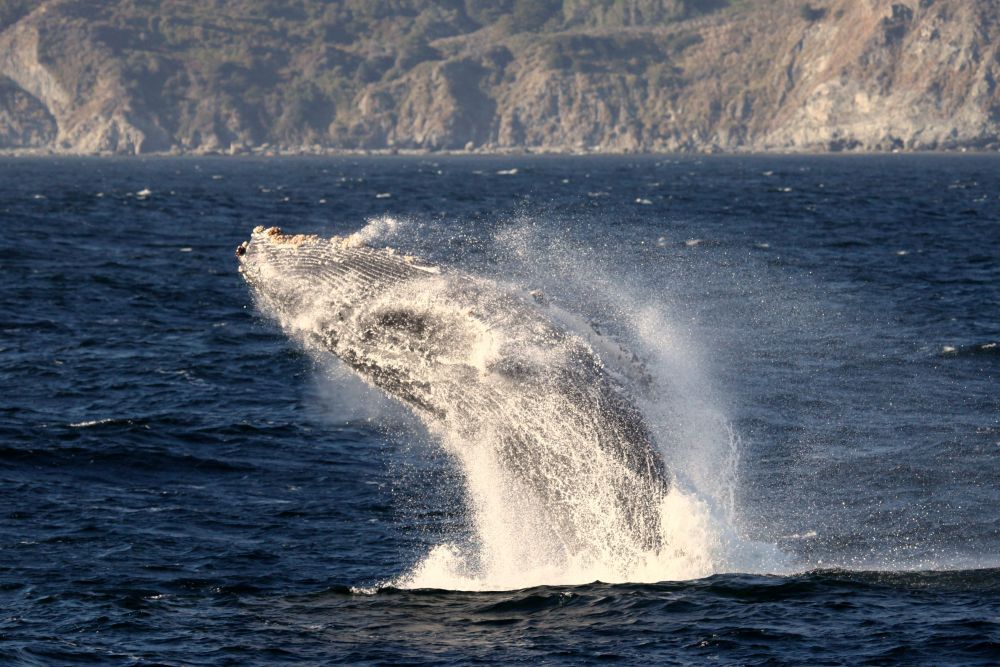 Humpbacks are present year-round but regularly sighted daily in summer and fall as the migrating humpbacks stay in Monterey Bay during that period.

Humpback Whales Behavior: Humpbacks know how to put on a show, regularly engaging in acts such as breaching – where they launch themselves entirely out of the water – and tail slapping.

Make sure to also watch out for rarer species such as gray whales, sunfish, and turtles.

Another fantastic place to watch humpback whales is in Maui, Hawaii. Read our season guide for whale watching in Maui. 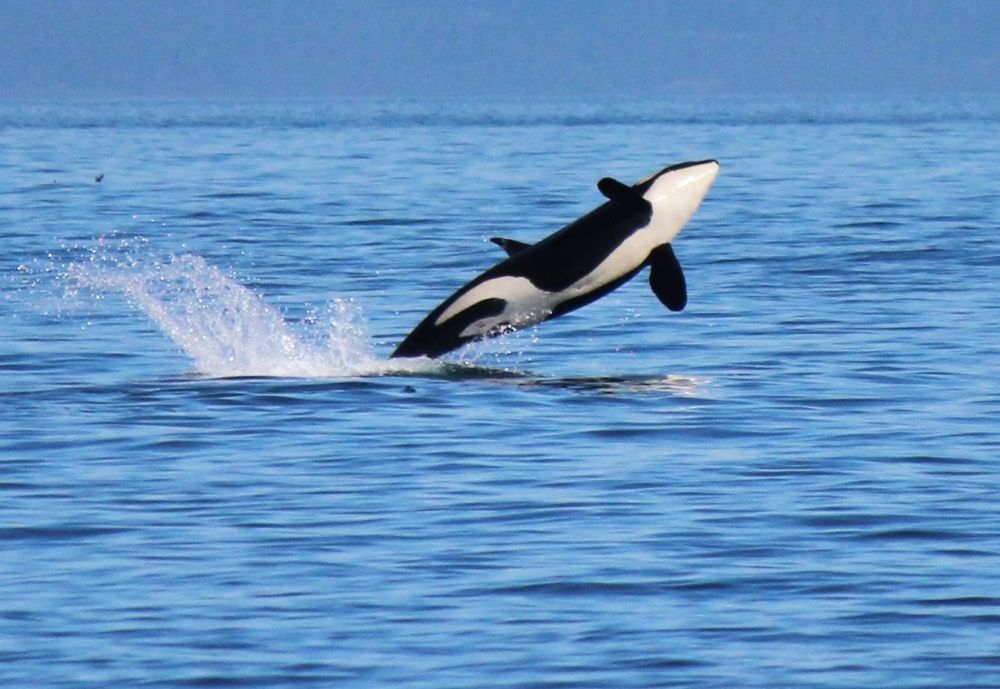 The most spotted killer whale in Monterey Bay is the transient killer whale. They hunt seals, sea lions, dolphins, porpoises, and gray whale calves, as well as minke whales. However, keep in mind that killer whale sightings are much less likely than humpbacks.

While you can spot killer whales every season in Monterey Bay, the best time in summer is June. Some local experts say there is another ‘slight peak’ from late August until October. 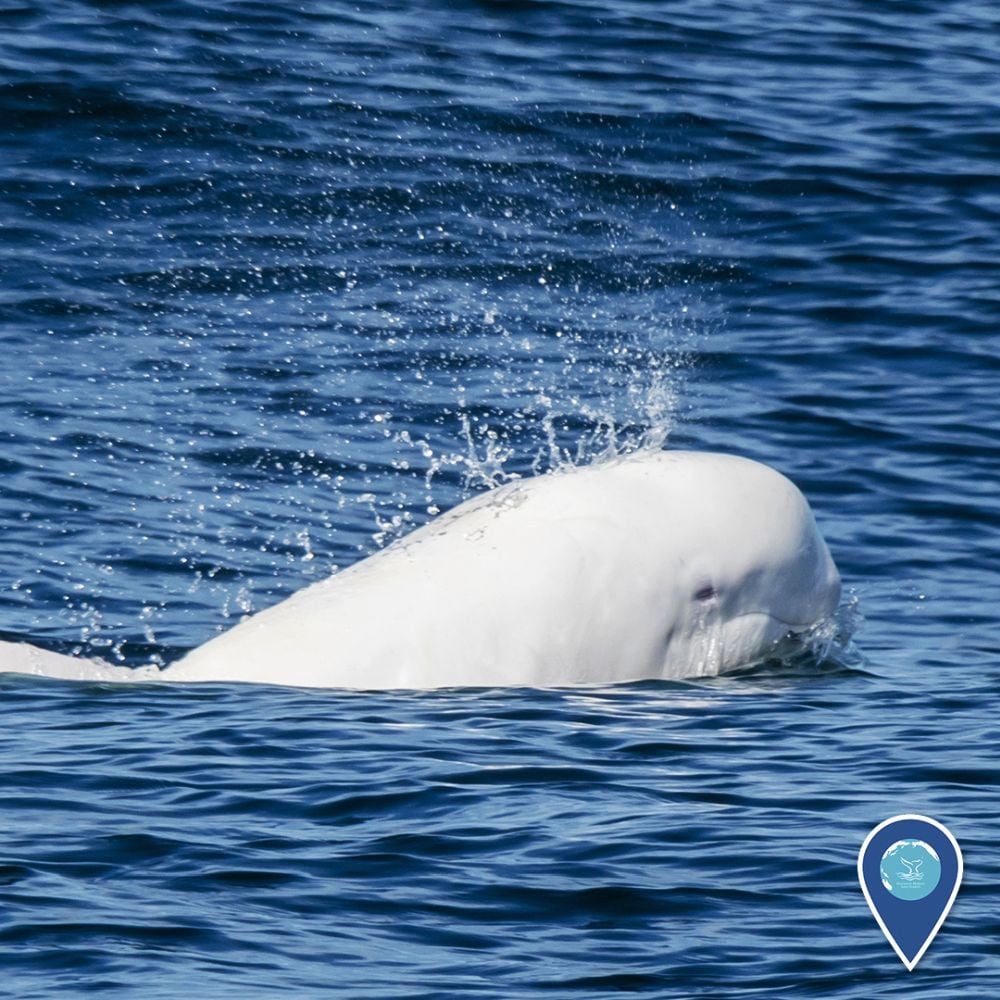 Whale Watching in Monterey by Month 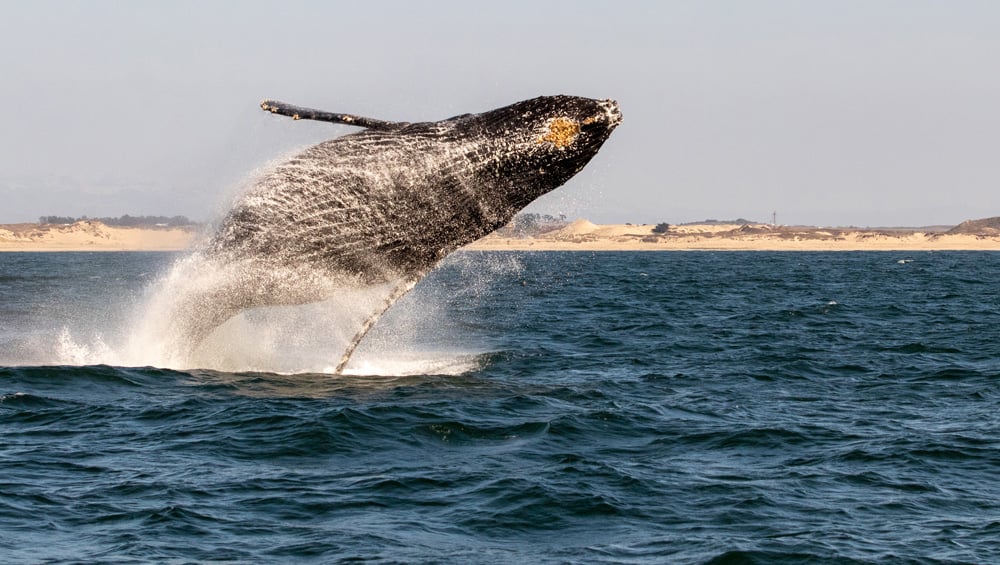 January is an excellent time of year to spot gray whales and humpback whales on a Monterey whale watching tour. Especially the middle weeks of the month coincide with the peak of the gray whale migration. Other marine life that can be seen at this time include several dolphin species and the occasional pod of Killer Whales.

In February, gray whales and humpback whales are common sightings. Dolphin species such as Risso’s Dolphins and Pacific White-sided Dolphins can be seen in large pods and, if you’re lucky, you may spot Killers Whales.

March is still an excellent month to spot migrating gray whales as they begin to move northwards up the coast, sometimes with calves in tow. Humpback whales and a variety of dolphin species are common during this time, while the rarer gray whale may also be seen.

During April, Killer Whales start to become more prevalent in the Monterey area, often in matriarchal pods. Alongside this species, possible sightings in this month might include humpback whales, gray whales with calves, and numerous dolphin species. April tends to be the windiest month in Monterey, so it’s best to come prepared with suitable clothing.

In May, humpbacks are the most abundant species of whale and can sometimes be seen breaching spectacularly out of the water. This month is also the first time during the year when blue whales can be sighted in Monterey.

June is a great month to see humpbacks, which are often spotted on a daily basis. There are also chances to see blue whales and gray whales as they feed off the coast, as well as many dolphin species.

In July, sightings of humpback whales and blue whales – the largest animal on Earth – generally reach their peak. Large pods of dolphins are also common, sometimes being spotted in numbers up to 1000.

August can produce a range of sightings, as many marine species are active in the Monterey area. Blue whales and humpbacks are still frequent visitors. Other species to spot include Minke Whales and gray whales.

In September, humpback whales are the most common sighting and are often seen on a daily basis. Blue whales start to become less prevalent during this month, however, Killer Whales can sometimes be seen feeding. September is generally a very still month in Monterey and the lack of wind makes it great for whale watching.

October regularly produces excellent weather conditions for spotting marine life, and many whales can be seen moving along the coast. This can often be the best month to see gray whales, although this species tends to stay further from the shore. Blue whale sightings are possible but limited since it’s usually their last month here. Humpbacks are regular sightings.

November is often your last chance to see blue whales before they begin to migrate to other feeding grounds. Also in the area during this month are humpbacks, rare sightings of gray whales, and a few early gray whales.

December becomes an excellent time to spot gray whales in Monterey Bay as they return from their winter feeding grounds in the Arctic. Humpback whales and Killer Whales are also common sightings for those happy to brave the cooler temperatures during this month. 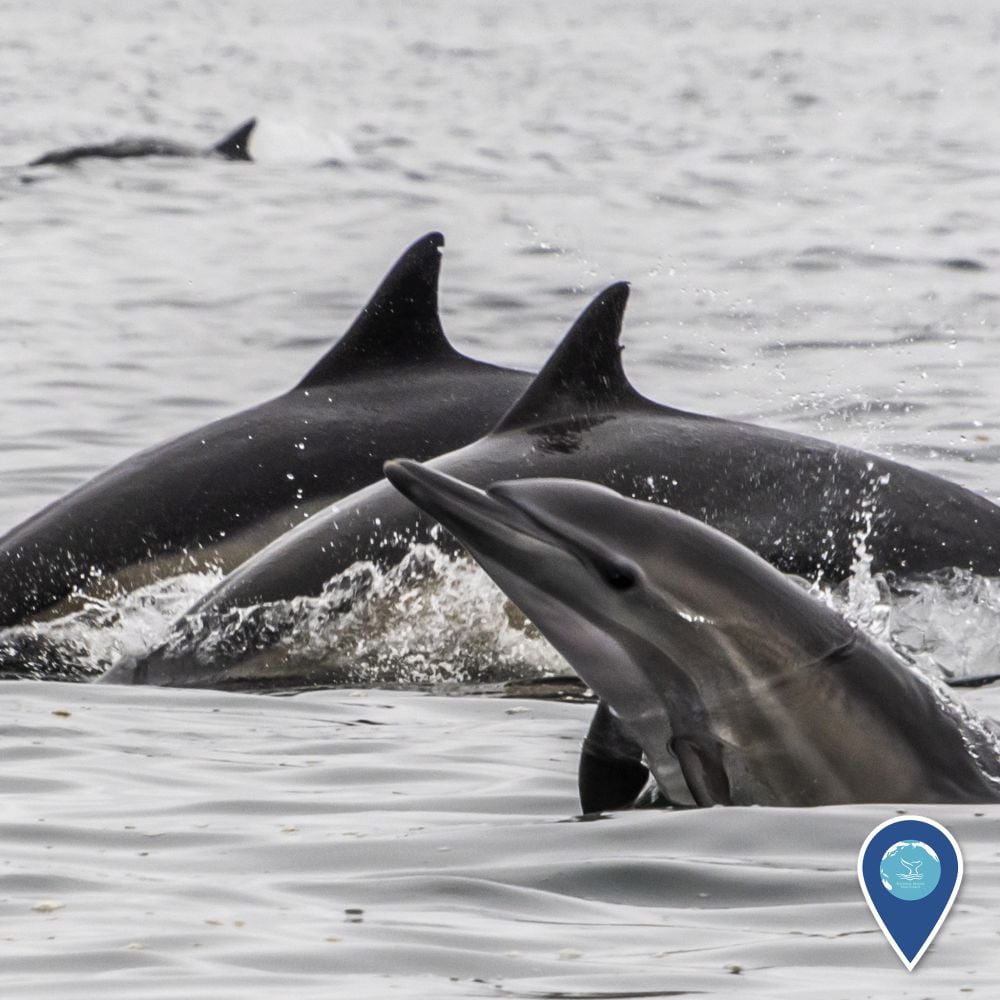 The calm waters of Monterey Bay tend to attract more whales due to rich upwellings of nutrients in the bay and the opportunity for the whales to rest in shallower water. There is also a great diversity of other marine life in Monterey, such as turtles, sea lions, and sea otters. However, San Diego can be particularly good for spotting Gray Whales during winter and Blue Whales during Summer.

If you plan to visit San Diego as well, make sure to check out the best times to go to San Diego (the link takes you to our guide with unique tips for each month in San Diego). San Diego is the birthplace of California and offers so many unique things to do besides whale watching. Additionally, make sure to read our guide about the best time to visit California and how many days you should visit this beautiful state.