November is a great month to visit California. However, the weather varies across the state. With our California November guide, you will know what to wear, which things to do, and the best places to visit throughout the month.

California in November offers mild daytime temperatures and crisp nights in most regions. The average high temperature ranges from 51°F at Lake Tahoe to 73°F in Los Angeles. Coastal and mountain areas are cooler, while most inland places offer pleasant conditions.

Except around Thanksgiving, California is a great destination to miss the summer and fall crowds throughout the month.

November is also the beginning of the fresh, rainy season. Wildfires may continue, but rainfall usually shortens these fires. However, the precipitation is generally light and typically starts later in the month. 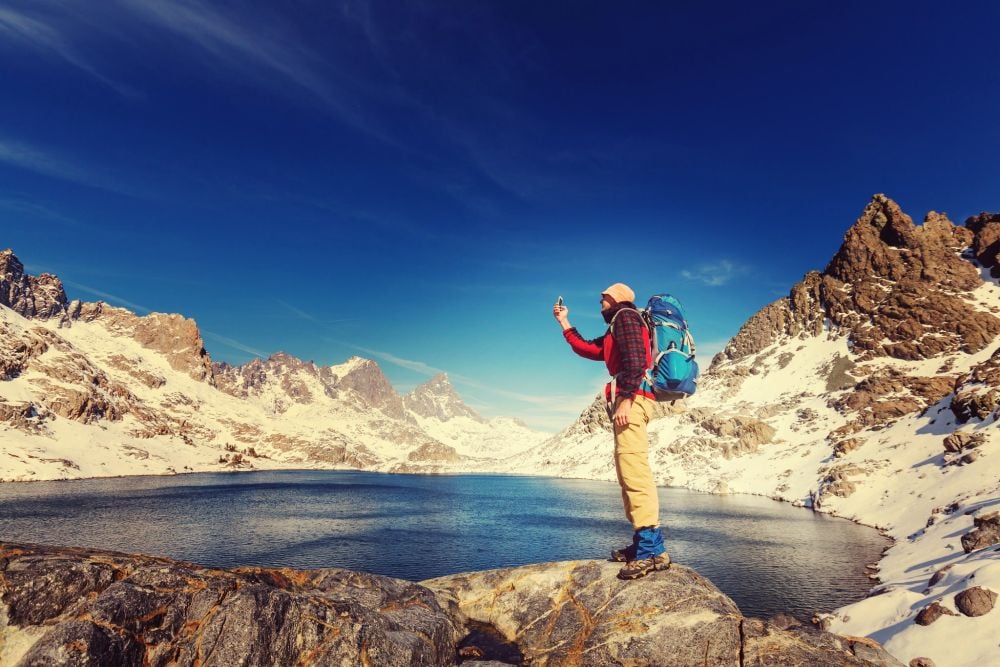 The temperatures in California’s coastal regions will be mostly pleasant throughout November. The desert areas will be cool enough, making them a great place to visit without the heat from the previous summer and early fall months.

In mountain regions, snow begins with the winter rains. This can happen in November or even as early as October and sometimes much later in the winter months. Ski season starts in some resorts already in mid- or late-November in California. However, even if there is not enough natural snow, don’t worry: Ski resorts are using snow-making machines if necessary.

Make sure to read our in-depth California itineraries!

One must-do activity is a whale-watching trip in San Diego or Monterey. While the gray whale season starts later in December, November is still an excellent time for whale watching. You can spot humpbacks and other species. It’s also less busy now. Check out our complete Monterey Whale Watching Monthly Guide with must-know tips and our article with tips for San Diego Whale Watching (with whale sightings for November).

In Northern and Coastal California, expect temperatures between 60°F and 70°F degrees during November. San Diego will be the warmest and sunniest city, while Lake Tahoe is typically the coldest area, with very little rain or snow but temperatures below freezing. Bring layers for the cooler regions as if you’re preparing for a cool, damp coming winter.

November can be very warm when you’re visiting Northern California inland. On the other hand, even on a hot day, it often gets a little chilly if you are at the coast, especially between mid- and late-November. Keep that in mind when visiting the beach during this month.

November is an excellent month to visit Napa Valley. The weather here in November is typically mild and pleasant. Average high temperatures generally range from the upper 60°F to 68°F degrees during the day. At night it gets a lot colder with temperatures in the 40s.

There will be days when it rains in Napa Valley and days when it is overcast, but the sun will be out most of the time. Rainstorms are less common in November, although the ones that do occur tend to be brief and mild.

Besides the pleasant weather, November is the perfect month to visit Napa Valley. The fall colors are usually at their peak in the first half of November, but they may last far into the month. Additionally, accommodation rates are lower, there is less traffic, and it’s easier to get a reservation in a restaurant.

November in this region can bring California fall and winter weather conditions. Even if a t-shirt might be ok for an inland trip, always bring layers. In the colder coastal areas, wear long-sleeved shirts, pants, sweaters, scarves if necessary. Pack a waterproof, hooded jacket for the rain. Pack heavier winter clothing like long underwear, hats, gloves, and puffer jackets in colder areas.

Thanksgiving week later in the month will have the most crowds of people traveling as almost everyone visits their family members. Early and mid-November is better for visiting due to more favorable weather and lighter traffic.

November is a great month to watch the 49ers football team, enjoy a Christmas tree lighting ceremony, or go on a “Turkey Trot” run on Thanksgiving Day.

With cool evenings and warm days, Southern and Central California still offer pleasant weather for a trip in November. Temperatures reach a high in the upper-60°F degrees, and there is light rain, if at all.

November will feel like fall in these areas of California, so wear layers of shirts, pants, sweaters, and waterproof jackets. In colder regions such as the mountains, bring winter layers like puffer jackets for the chilly 40°F degrees temperatures.

Thanksgiving week in late November is definitely the busiest time at airports and other travel hubs. The traffic is heavier, and congestions can occur. Early and mid-November is the best time for hitting Southern California due to less traveler traffic.

In particular, visit Disneyland early in the month, when it is less busy. November is also a fantastic time for colorful festivals like the unmissable “Día de Los Muertos,” or Mexican Day of the Dead, held across Los Angeles, or the Magic Lantern Art Festival in Arcadia, where you walk through a “Moonlight Forest” of lanterns.

November in Los Angeles tends to be dry with pleasant afternoon temperatures and cool to chilly evenings, nights, and mornings.

From early to mid-November, temperatures often reach moderate 70 F° degrees in Los Angeles. However, a heatwave can cause temps up to the 90s, especially inland. From mid-November to late November, things start to cool down to around 60 °F degrees along the coast.

Morning and Night: November’s late night and early morning average low temperatures in Los Angeles can be cooler, hovering around 55 F° Fahrenheit early in the month. Later in November, they fall to near 50 F°. Cooler mornings near the end of the month can drop to around 45 F°.

In November, the weather in Yosemite National Park begins to get slightly crispier but still enjoyable. There is a chance of snow in most years at high elevations. However, Yosemite Valley will likely be mild enough that you won’t need to wear more than a light jacket. Always check the weather forecast when preparing for your trip to Yosemite.

The Sacramento area will be the wettest, with approximately half an inch of rain this month. You may also see continued wildfires, though the rain often stalls these fires.

November is an excellent time for touring the California desert region. Temperatures are perfect: an average of 60°F degrees and sunny. This is the ideal month for visiting the desert, as long as you’re prepared for cold temperatures at night hovering just above freezing.

During the daytime, you may wear summer clothing like t-shirts or long-sleeved shirts and shorts. However, at night it’s highly recommended to layer up with sweaters, scarves, and puffer jackets. Temperatures vary considerably in the desert. Keep in mind that by the end of November, it gets significantly cooler.

The desert cities are busy in November, thanks to the pleasant temperatures. Consider banner events like Palm Springs Pride and the Ridgecrest Petroglyph Festival. Thanksgiving week will be even busier, so early and mid-November is the best time for visiting as the days are warm and there is less traffic.