March is one of the best months of the year to be in Las Vegas. However, there are still some circumstances that can make or break your visit. This article provides you with all the essential tips before going in March, including the 2022 shows and events.

Is It Pool Weather? 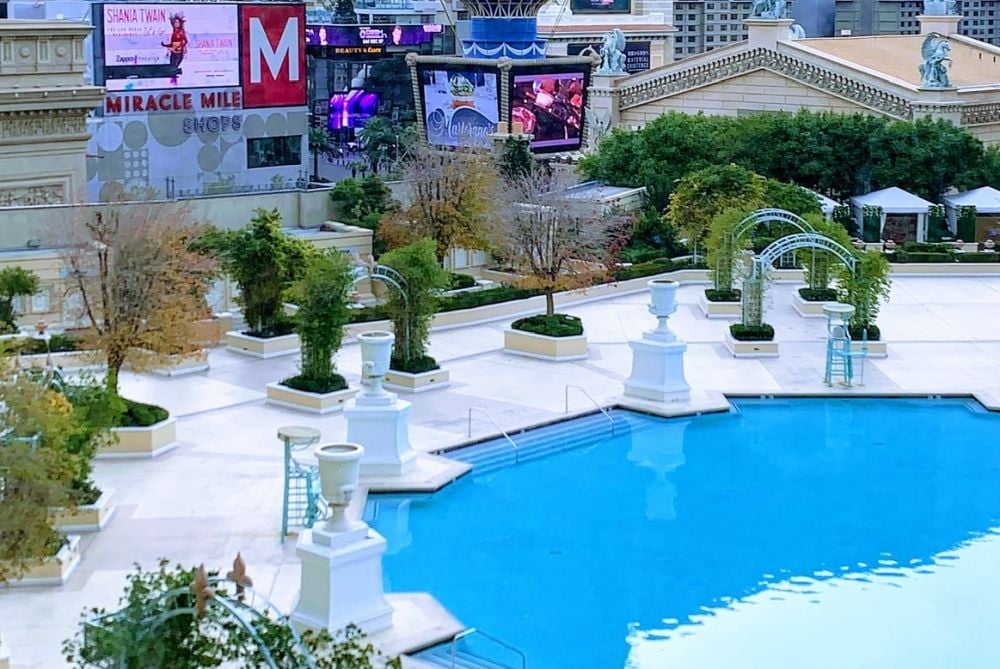 While some hotels in Las Vegas have a pool open year-round, March is the time when most pools finally open up for the season. In other words: the pool season officially starts. Depending on the forecast, some hotels open their pools in early March, some in late March, and a few in early April. 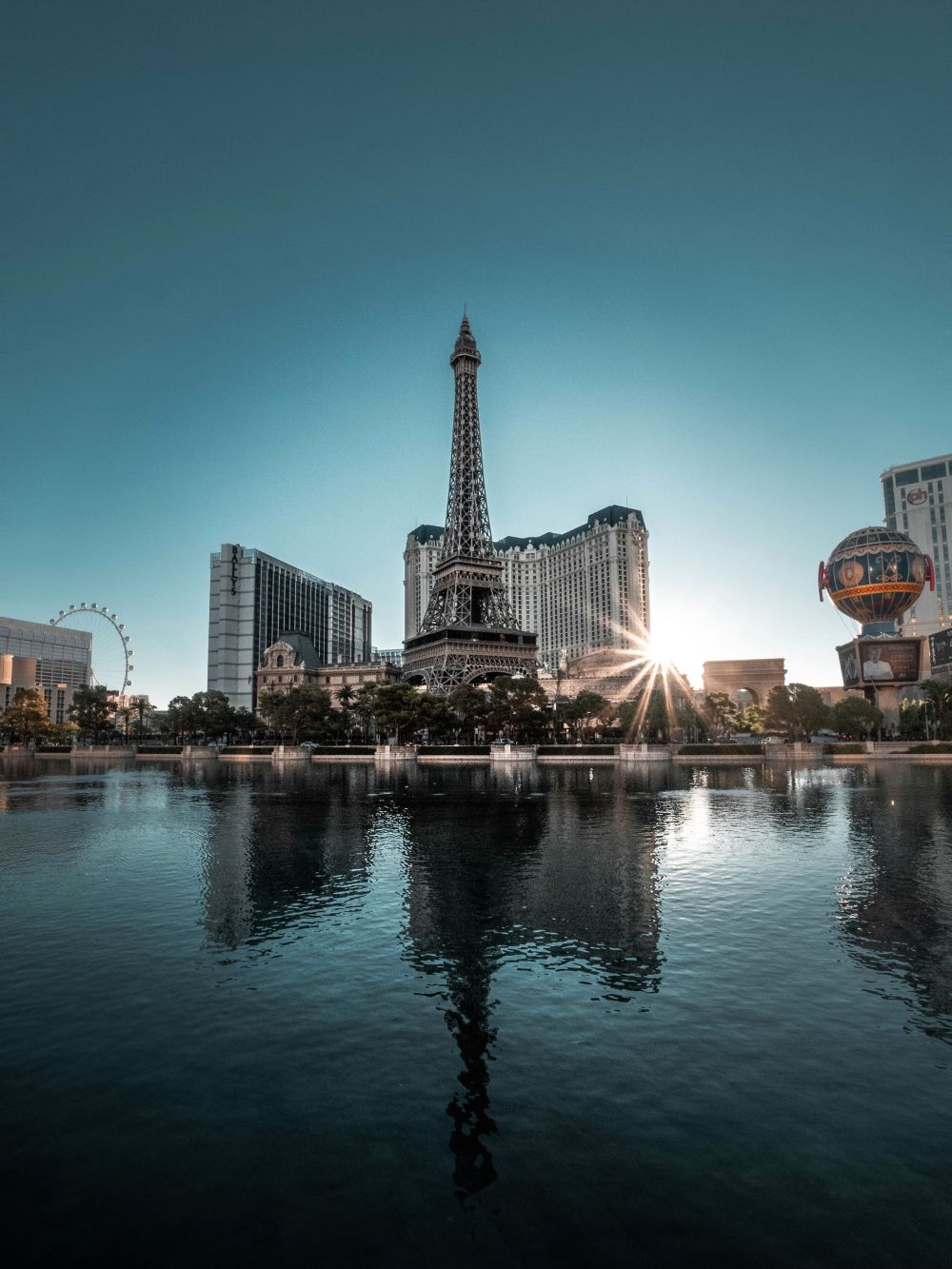 Check out the quick facts and tips for March below.

For more details about each subject, scroll/swipe down. We cover everything in great detail within this article. Especially the tips from a local what you should wear and the best things to do in March are extremely helpful (in the middle of this article and at the end).

Attractions/Shows: Each attraction is open, and all the shows in Vegas are playing.

Pools: Pool season starts in March at most hotels. Some open in early March, some later in the month.

Is March a good month in Vegas? March is a very good time to visit Las Vegas. The weather is typically sunny and pleasant. Temperatures rise to summer-like degrees during the day but are still far from the extreme summer heat. 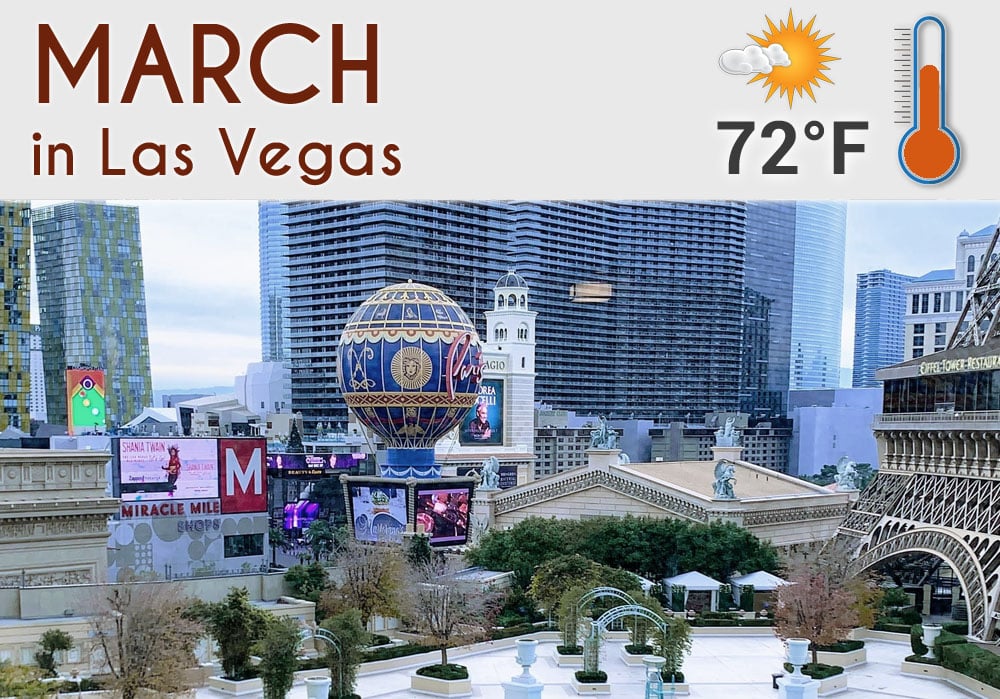 Las Vegas is located in the Mojave Desert, so the probability of rain is low year-round and is even dropping throughout March. Temperatures are again on the rise during the month, after they hit their minimum in the previous winter months. The amount of sunshine is also on the rise, making evenings a little more comfortable.

March weather in Las Vegas is comfortable to stroll through the city. Average highs reach about 72°F (22°C), with low humidity levels. The mornings are about 15°F (9°C) colder and the average rainfall is only 0.5 inches.

Clouds: In March, you will see clear blue skies most of the time. More than half of the days pass by without seeing a single cloud. While overcast days are possible, they are much less common than in other areas of the United States in March.

These weather conditions make it perfect for getting outside in the afternoon and enjoying the inside attractions in the evening. It will feel like a relief if you’re coming from colder areas in the north.

Progression: With March being the transition between winter and summer, temperatures rise steadily throughout the whole month:

Morning/Noon/Evening Temps: The nights and mornings can get pretty chilly in the desert, even in March. Be prepared for rapidly falling temperatures in the evening. This is what a day could look like:

Precipitation: During March, all precipitation in Las Vegas falls as rain since temperatures do not go below freezing.

The chance of rain falls drastically throughout the month, starting with about 12% daily chance in the beginning of the month and ending with around 5%. Typically there is only a slim chance for some raindrops. So, if you want rain, stay away from Las Vegas.

Wind: Especially in the afternoon, wind speeds increase in the desert. The average wind speed in March is 8.5mph for Las Vegas. The wind speeds lower the perceived temperature. In other words, you might feel colder than it is. On windy days a sweater is a good idea. We suggest checking the forecast.

Quotes from Locals About the March Weather

Tip: Check out our Las Vegas in April guide if you prefer even warmer weather.

We always recommend the Fodor’s Las Vegas Guide (on Amazon): It’s up to date, has the best map, honest recommendations from locals, and the best tips for everything: gamble in a casino on the Strip, party at a club, or take a tour to Grand Canyon. It’s quite detailed and the insights are candid. The big advantage is, that you don’t have to spend time searching all those things on Google. What we loved most:

March is busier, and the hotel rates are higher than usual in Las Vegas around the first weekend of March Madness (NCAA Basketball Tournament), from Thursday to Sunday. Especially the sportsbooks are jam-packed.

Also, it gets busy on St. Patrick’s Day weekend and during the ACM Awards (if they are being held in March). In case Easter occurs in March, it can be slightly more active around that date as well.

Avoid those times if you want to avoid higher hotel rates and crowded sportsbooks. Like March Madness, St. Patrick’s Day weekend comes with increased rates and busier areas. Early March and late March are more suitable times to visit if you want to dodge all that (with 2022 being an exception, as the ACM awards are held in early March).

Good to know | March Madness: While the rates climb during the first weekend (and slightly during the second weekend) of the NCAA tournament, it only gets packed at the sportsbooks. Other places like the Strip are just a little busier, if at all.

Betting: March Madness is for you if you are interested in the tournament and betting. Forty-eight games on the first weekend generate a lot of interest and sports betting opportunities. Remember that none of the games take place in Las Vegas.

ACM (American Country Music Awards): The ACM Awards are usually held in April or March in Las Vegas. Check the official site for the upcoming date: ACM Country. In 2022 they are/were held on Monday, March 7.  It’s always busier in Vegas and hotel rates climb around that day (typically 1-2 days before).

Easter: When Easter falls in late March, expect a slightly busier weekend and the week before with more families and kids. The dates for Easter are:

Spring Break: Locals say, that spring break won’t affect your visit to Vegas in terms of crowds. While it starts in mid-February and continues through mid-April depending on the school, most college students don’t select Las Vegas as a break destination.


Accommodation rates climb during the first weekend of March Madness and sometimes on the second weekend. They also increase on St. Patrick’s Day weekend and often during the week before March Madness when many conventions take place. The cheapest time to book is usually early and late March.

Check great deals from booking.com (see above), or via this link: Las Vegas Hotel Deals (Tip: sort by start rating and price!)

Mid-week is better: Besides the higher prices during those times, you can always find hotel deals in Vegas, especially mid-week. If possible, try to avoid weekends as they are more expensive.

The following is a list of shows, concerts, stand-up comedy, and other special events at the most popular hotels and casinos (subject to change):

It can sometimes be tricky to figure out what to wear in Las Vegas during the month of March. Spring usually arrives early, which means you can expect cool mornings and warm, sunny afternoons.

In March you wear short/long-sleeve t-shirts, jeans, and a light sweater or a light jacket for cooler mornings and evenings in Las Vegas. Remove a layer or two when it gets warm in the afternoon. Layering is key in March.

This is the month when pool season officially starts. If the low 70s feels warm to you, make sure to pack a swimsuit, sunscreen, and sunglasses so you can make a splash.

Advice: As always, when packing for a trip, it’s a good idea to choose items that all coordinate well with each other to give you the most possible options.

What to wear for mornings and afternoons in Vegas (think brunch/lunch, walking the strip):

What to wear for a night out in Vegas:

Spring in Vegas is the perfect time to get outdoors. Whether you enjoy golfing at one of over 50 courses or hiking at the nearby Red Rock Canyon, if you’re going to be spending several hours outside make sure to bring:

What to wear for mornings and afternoons in Vegas:

What to wear for a night out in Vegas:

March clothing quote from another local:

Pack clothes that you can wear in layers to cover a wide range of temps. Expect evenings to be on the chilly side.

Things to Do in March | Our Tips

One of the best things about Las Vegas is the number of activities. You can just walk through some fantastic hotel lobbies for free, for example. Then you may have dinner in one, see a show in another and sleep in a third.

However, there is so much more to do. Our recommendations for March:

Shin Lim and his up-close magic at the Mirage Hotel and Casino is intriguing. This show is a family-friendly event full of fun intriguing magic tricks. Find more information and tickets here: Shin Lim Magic Show.

March is a great time to hike at Red Rock Canyon as you’ll avoid the extreme summer temperatures that Las Vegas is known for. There is also a scenic drive available.

You can attend multiple events at Red Rock Canyon. Educational talks, as well as guided hikes, are available. Most of the events listed are free and don’t require reservations. However, it’s best to check the website in case reservations or a fee is required. See more details and tickets: Red Rock Canyon.

This hip-hop dance group offers a fantastic show! You’ll be able to watch exciting, choreographed dances that will definitely impress you. Jabbawockeez is the perfect activity when wondering what to do in Las Vegas in March.

Area15, an indoor attraction just minutes from the Las Vegas Strip, provides larger-than-life art installations, virtual reality experiences, unusual and intriguing experiences, and events. It’s similar to a shopping mall, except instead of the usual stores, you’ll find artists and unique things to interact with. This is a must-see in March! 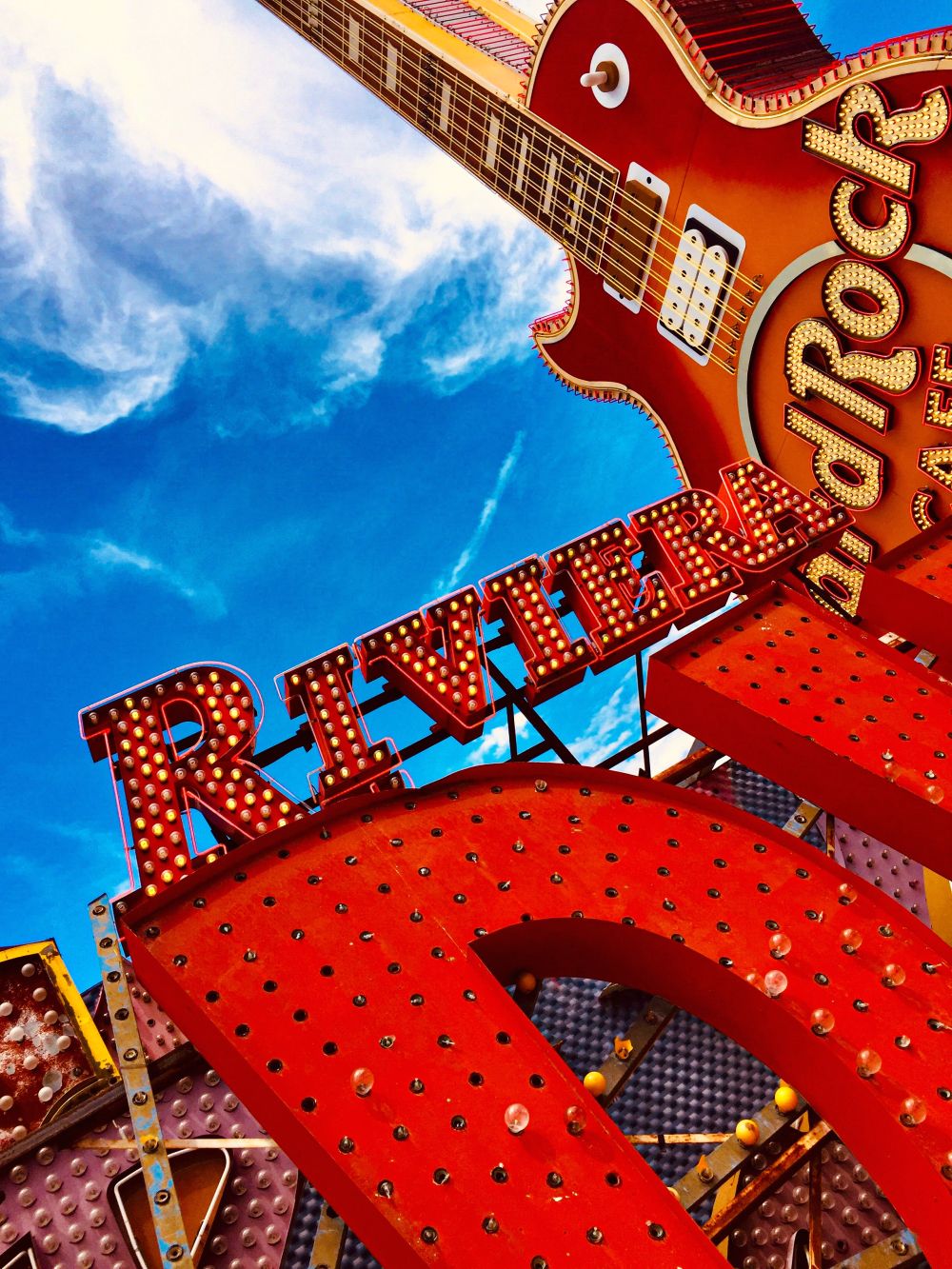 This attraction was built in the 1930s, and there are now over 200 neon signs on the spacious property.

The Neon Museum is a great activity in March because everything is outside and it often gets far too hot during the summer period.

Tip: Read our full guide with tips for the best time to visit Las Vegas [with monthly suggestions].